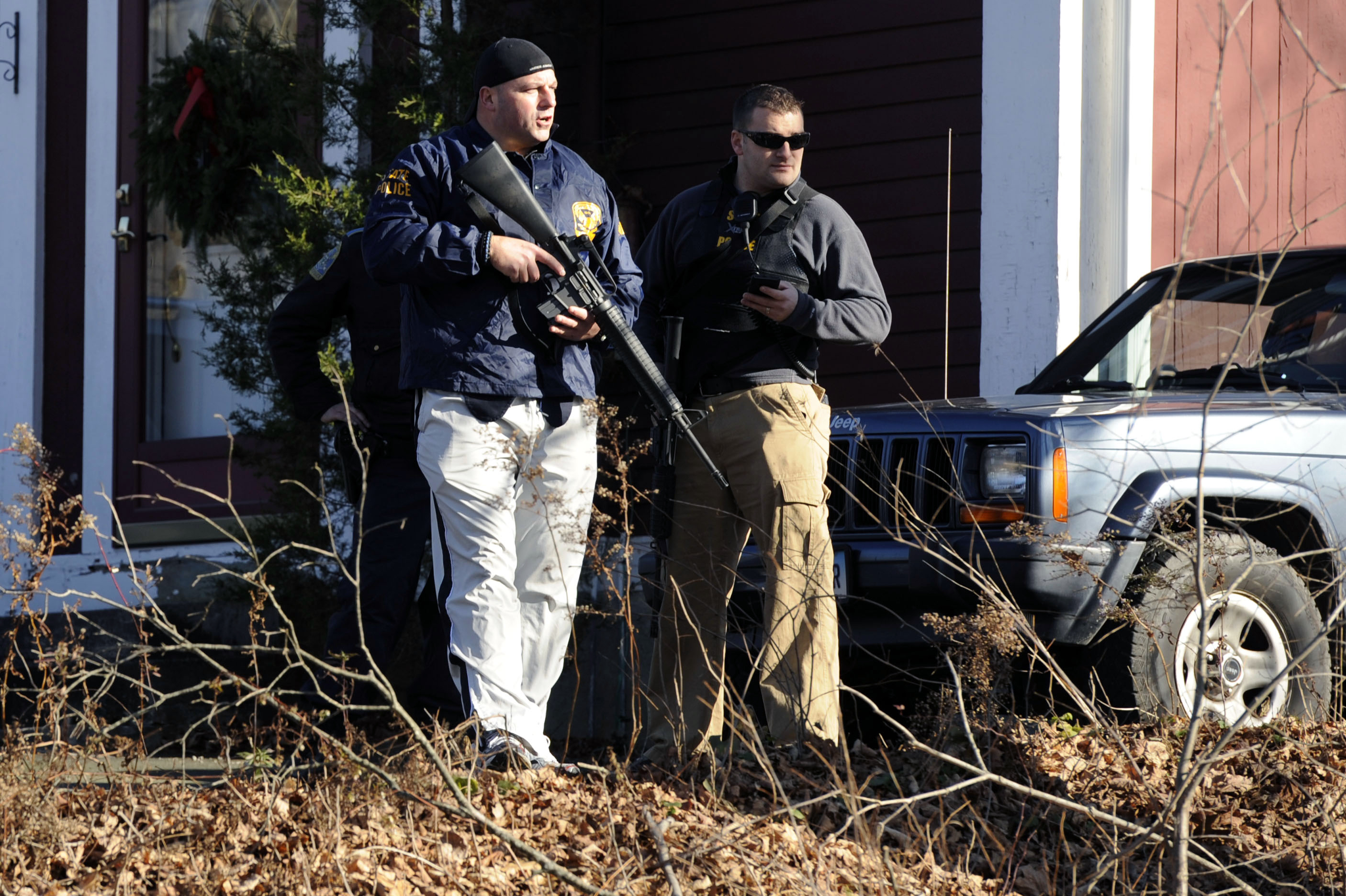 WASHINGTON He was an honors student who lived in a prosperous neighborhood with his mother, a well-liked woman who enjoyed hosting dice games and decorating the house for the holidays.

Now Adam Lanza is suspected of killing his mother and then gunning down more than two dozen people, 20 of them children, at a Connecticut grade school before taking his own life.

The 20-year-old may have suffered from a personality disorder, law enforcement officials said.

Investigators were trying to learn as much as possible about Lanza and questioned his older brother, who is not believed to have any involvement in the rampage.

Lanza killed his mother at their home before driving her car to Sandy Hook Elementary School and — armed with at least two handguns — carried out the massacre, officials said.

A third weapon, a .223-caliber rifle, was found in the car, and more guns were recovered during the investigation.

So far, authorities have not spoken publicly of any possible motive. They found no note or manifesto, and Lanza had no criminal history.

Lanza's aunt said her nephew was raised by kind, nurturing parents who would not have hesitated to seek mental help for him if he needed it.

Marsha Lanza, of Crystal Lake, Ill., said she was close with Adam Lanza's mother and sent her a Facebook message Friday morning asking how she was doing. Nancy Lanza never responded.

If her son had needed counseling, "Nancy wasn't one to deny reality," she told The Associated Press late Friday.

Marsha Lanza said her husband saw Adam as recently as June and recalled nothing out of the ordinary about him.

Catherine Urso, who was attending a vigil Friday evening in Newtown, Conn., said her college-age son knew the killer and remembered him for his alternative style.

"He just said he was very thin, very remote and was one of the goths," she said.

Adam Lanza belonged to a technology club at Newtown High School that held "LAN parties" — short for local area network — in which students would gather at a member's home, hook up their computers into a small network and play games.

Gloria Milas, whose son Joshua was in the club with Lanza, hosted one of the parties once.

She recalled a school meeting in 2008 organized by the gunman's mother to try to save the job of the club's adviser. At the meeting, Milas said, Adam Lanza's brother Ryan said a few words in support of the adviser, who he said had taken his brother under his wing.

"My brother has always been a nerd," Ryan Lanza said then, according to Milas. "He still wears a pocket protector."

Joshua Milas, who graduated from Newtown High School in 2009, said Adam Lanza was generally a happy person but that he hadn't seen him in a few years.

"We would hang out, and he was a good kid. He was smart," Joshua Milas said. "He was probably one of the smartest kids I know. He was probably a genius."

Lanza and his mother, Nancy, lived in a well-to-do part of Newtown, a prosperous community of 27,000 people about 60 miles northeast of New York City.

A grandmother of the suspect — who is also the mother of Nancy Lanza — was too distraught to speak when reached by phone at her home in Brooksville, Fla.

"I just don't know, and I can't make a comment right now," Dorothy Hanson, 78, said in a shaky voice as she started to cry. She said she hadn't heard anything official about her daughter and grandsons. She declined to comment further and hung up.

A law enforcement official speaking on condition of anonymity said investigators believe Lanza attended the school several years ago but appeared to have no recent connection to the place.

At least one parent said Lanza's mother was a substitute teacher there. But her name did not appear on a staff list. And the law enforcement official said investigators were unable to establish any connection so far between her and the school.

Adam Lanza's older brother, now 24 and living in Hoboken, N.J., was being questioned, a law enforcement official said. He told authorities that his brother was believed to suffer from a personality disorder, the official said, speaking on condition of anonymity because he was not authorized to speak on the record about the unfolding investigation.

The official did not elaborate, and it was unclear exactly what type of disorder he might have had.

Ryan Lanza had been extremely cooperative and was not under arrest or in custody, but investigators were still searching his computers and phone records. Ryan Lanza told law enforcement he had not been in touch with his brother since about 2010.

Brett Wilshe, a friend of Ryan Lanza's, said he sent him a Facebook message Friday asking what was going on and if he was OK. According to Wilshe, Lanza's reply was something along the lines of: "It was my brother. I think my mother is dead. Oh my God."

Lanza's parents filed for divorce in 2008, according to court records. His father, Peter Lanza, lives in Stamford, Conn., according to public records, and he reportedly works as a tax director for General Electric.

A neighbor in Newtown, Rhonda Cullens, said she knew Nancy Lanza from monthly get-togethers the neighborhood women had a few years back for games of bunco, a dice game.

"She was a very nice lady," Cullens said. "She was just like all the rest of us in the neighborhood, just a regular person."

Cullens recalled that Lanza liked to garden and to make her house look nice for the holidays. Lanza joked, though, that no one noticed because the house was out of view, up a hill, she said.

Sandeep Kapur, who lives two doors down from the Lanza family in Newtown, said he did not know them and was unaware of any disturbances at the Lanza house in the three years that he and his family have been in the neighborhood.

He described the area as a subdivision of well-tended, 15-year-old homes on lots of an acre or more, where many people work at companies like General Electric, Pepsi and IBM. Some are doctors, and his next-door neighbor is a bank CEO, said Kapur, a project manager at an information technology firm.

"The neighborhood's great. We have young kids, and they have lots of friends," he said. "If you drive past this neighborhood, it gives you a really warm feeling."