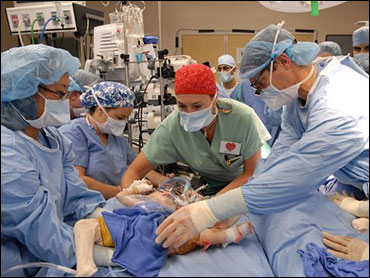 A medical team worked through the night to rebuild the bodies of conjoined twins who were successfully separated after a daylong operation.

"The girls are doing great," she said.

Ten-month-old Regina and Renata Salinas Fierros were born facing each other, joined from the lower chest to the pelvis. They were fused in several places, including the liver and genitals, they shared a large intestine, and Regina was born with one kidney.

During the operation, doctors made an incision at the breastbone and then divided the internal organs.

Late Wednesday, the young twins spent their first moments apart, when one was wheeled to another room so plastic surgeons could begin the reconstruction work.

Several doctors on the 80-person medical team also took part in the 2003 separation of conjoined twins from a set of triplets at the hospital. Wednesday's surgery was considered more complex because it involved more organs.

Despite the risks, doctors said they expected a successful operation.

"Everything has been going impeccably, as one could possibly imagine," surgical director Dr. Henri Ford said several hours into the surgery.

Conjoined twins occur when a single fertilized egg fails to divide completely. It's estimated that a few hundred pairs of conjoined twins are born globally each year. In the U.S., they occur 1 in every 200,000 live births.

The way that Regina and Renata were fused makes them a rare type of conjoined twins, occurring in about 10 percent of cases.

According to the Childrens Hospital Web site, this was an ideal age at which to separate the twins.

"Their tissues and bones at this age tend to be both firm and pliable enough — and also of a reasonable size — to manipulate them easily," said pediatric surgeon James E. Stein, who headed the surgery team.

Stein said there was another compelling reason for scheduling the separation now: For several months, Regina has not been gaining weight well, despite having a hearty appetite.

The twins were born in Los Angeles on Aug. 2, 2005, to Mexican parents who were visiting relatives in the United States. The girls' mother, 23-year-old Sonia, said she didn't realize she was carrying conjoined twins until she was hospitalized with an infection.

The couple extended their tourist visa so that the twins could receive medical care.

The girls were transferred to Childrens Hospital a day after their birth where they underwent tests in preparation for the separation surgery. Doctors implanted inflatable balloons under their skin so that it could expand to cover the surgical wounds after the operation.

Childrens Hospital declined to reveal the operation's cost, which will be covered by a state health program. The hospital previously performed five conjoined twin operations since 1966 including three cases in which both twins survived.