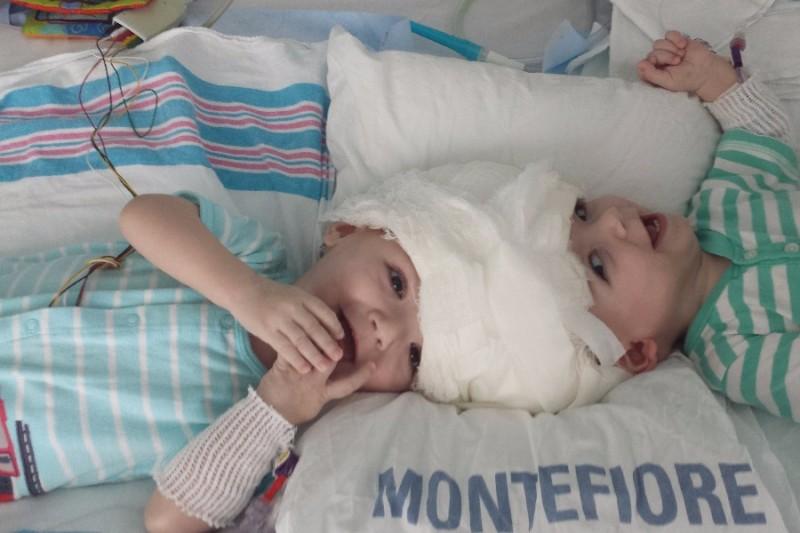 Twin baby boys who were conjoined by the head have been successfully separated after a rare surgery at a New York City hospital.

Nicole McDonald, mother of the two boys, shared the news on Facebook this morning.

“Dr Goodrich and his team just left. He walked in the room and plopped in the arm chair by the door,” she wrote in the post. “After 16 straight hours of surgery, he still had his sense of humor. ‘Well, we did it,’ he said.”

However, she notes that her family is still far from being out of the woods.

“It’s a bit surreal to sit here and type this...I should feel so happy...TWO SEPARATE BABIES!!!...and yet I ache with the uncertainty of the future,” she wrote.

Doctors began the procedure on the 13-month-old twins, Jadon and Anias, on Thursday. As of Friday morning, McDonald shared that Jadon was brought back to his hospital room, but Anias was still in surgery.

“When they told me they were wheeling Jadon up first, it took me a second to comprehend,” she wrote. “I actually asked why they rearranged the room because I hadn’t really internalized the idea that there would be 2 beds in here. Welcome back my sweet Jadon. Happy rebirth day. Anias is still in surgery believe it or not...maybe 2 more hours.”

Dr. James Goodrich of Children’s Hospital at Montefiore Medical Center in the Bronx led the procedure, CNN reports. Goodrich is considered the leading expert on what’s known as craniopagus surgery – an extremely rare procedure. This was only the 59th of its kind in the world since 1952.

McDonald and her husband Christian had a difficult decision to make, as the surgery comes with a number of major risks, including the possibility of death or long-term brain damage for one or both of their babies.

But life before the surgery has been extremely difficult, and the couple decided to take the chance in hopes their children could live separate, independent, and happy lives.

“Since the day they were born, these boys have had every test under the sun. They’ve had blood draws, blood transfusions, IVs, echocardiograms, kidney scans, ultrasounds of their heads, a CT scan, an MRI, multiple xrays… The list goes on and on. The MRI results show that the boys share a small section of brain tissue (about 1.5cm), the dura around the brain, and the middle section of their superior sagittal sinus (the large vein that runs along the top of the brain). They’ve been poked and prodded more than I could have ever imagined, and the worst part is that I can’t even hold them when they cry,” McDonald writes on the family’s GoFundMe page.

The family has received an outpouring of messages, donations, and well-wishes through their fundraising and Facebook pages.

“When this all began, back in that dark ultrasound room, I knew we were in for a battle, but I also knew that with God anything is possible,” McDonald writes. “Our faith continues to grow as we watch God work out blessing after blessing in our life. We are eternally grateful for all of you who have donated, sent messages, sent cards, and prayers. Without you, we’d be sunk. Thank you for renewing our faith in the goodness of man.”