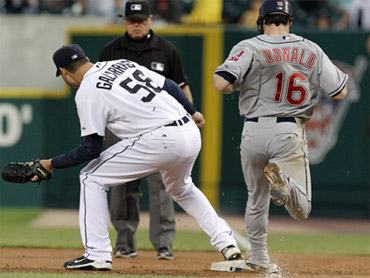 Rep. John D. Dingell, Democrat of Michigan, today announced that he plans to introduce a resolution calling on Major League Baseball to reverse its decision not to award Detroit Tigers pitcher Armando Galarraga a perfect game.

Galarraga was robbed of a perfect game by a blown call by umpire Jim Joyce with two outs in the ninth inning.

"Jim Joyce missed the call, but because he admitted it, we have a leg to stand on in our case to Major League Baseball," Dingell said in a statement. "Baseball's executives have corrected a mistake on the field in a regular season game before - the pine tar game. This is the right thing to do and if getting this resolution passed makes it easier, I'm glad to help."

"Last night's performance deserves its place in the record books," she said. "It is clear that Commissioner Selig should make an exception in this case and invoke the 'best interests of the game clause' to reflect Armando Galarraga's perfect game for the Detroit Tigers."

A pitcher earns a perfect game if he retires every batter who comes to the plate through nine innings. Galarraga was one out away from the rare exceedingly achievement (though it has happened twice already this season) when Joyce called Cleveland's Jason Donald safe at first base on a ground ball. Replayed clearly showed the runner was out.

"In my eyes, Galarraga is already part of a special and exclusive group - for this has only happened 21 times before in the long history of Major League Baseball," Dingell said today. "In fact, you could argue he's in a class by himself - the only pitcher to face 28 hitters in a perfect game."

Major League Baseball league indicated today it would not reserve the call, according to Associated Press and CBS News sources. Selig did say that the league will review video replay procedures.

White House Press Secretary Robert Gibbs also urged Major League Baseball to award the perfect game today. With tongue in cheek, Gibbs said he was speaking with the "full weight of the federal government" in making the appeal.

On Twitter, meanwhile, Michigan Gov. Jennifer Granholm declared a perfect game for Galarraga regardless of baseball's decision. She also issued a proclamation stating that "I, Jennifer M. Granholm, governor of the state of Michigan, do hereby declare Armando Galarraga to have pitched a perfect game, and I join Tigers fans all across the globe in saluting his unassailable accomplishment -- the first perfect game in Tigers history."