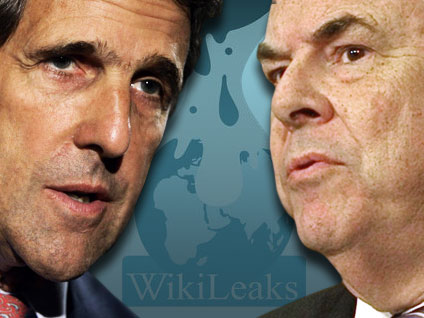 Congressmen on both sides of the aisle are condemning the massive leak of secret U.S. documents via the website Wikileaks as a reckless act that endangers American lives.

While WikiLeaks founder Julian Assange said he released the documents in the name of transparency, Kerry said that unlike the release of the Pentagon Papers, "this is not an academic exercise about freedom of information... Instead, these sensitive cables contain candid assessments and analysis of ongoing matters and they should remain confidential to protect the ability of the government to conduct lawful business with the private candor that's vital to effective diplomacy."

Sen. Joe Lieberman (I-Conn.), chairman of the Senate Homeland Security and Governmental Affairs Committee, called the leak "nothing less than an attack on the national security of the United States."

"By disseminating these materials, Wikileaks is putting at risk the lives and the freedom of countless Americans and non-Americans around the world," he said in a statement. "It is an outrageous, reckless, and despicable action that will undermine the ability of our government and our partners to keep our people safe and to work together to defend our vital interests. Let there be no doubt: the individuals responsible are going to have blood on their hands."

Lieberman said American citizens guide the "balancing act" between transparency and national security through the election of their congressional representatives.

"What Wikileaks is doing is to short-circuit this entire democratic process -- claiming for itself the exclusive, unilateral, and unchecked power to decide what should and shouldn't be made public," he said. "This is therefore not only an attack on our national security, but an offense against our democracy and the principle of transparency."

On CBS' "The Early Show" this morning, Rep. Peter Hoesktra (R-Mich.), ranking Republican on the House Intelligence Committee, called the leak a "massive" intelligence failure and said it could contain "a whole number of time bombs."

Rep. Peter King (R-N.Y.), the incoming chairman of the House Homeland Security Committee, went so far as to say WikiLeaks should be designated as a terrorist organization.

Yesterday on Fox News Sunday, Sen. Lindsey Graham (R-S.C.) said, "I agree with the Pentagon's assessment that the people at WikiLeaks could have blood on their hands."

Graham is a member of the Armed Services and Homeland Security committees. "Leaking the material is deplorable," he continued. "The world is getting dangerous by the day and the people who do this are really low on the food chain as far as I'm concerned. If you can prosecute them, let's try."

Also on the program, Sen. Clair McCaskill (D-Mo.), a member of the Armed Services Committe, said she agreed with Graham.

"The people who are leaking these documents need a gut check about their patriotism, and I think they're enjoying the attention they're getting but, frankly, it's coming at a very high price in terms of protecting our men and women in uniform," she said. "I hope that we can figure out where this is coming from and go after them with the force of law."

Update: Sen. Kit Bond (R-Mo.), the top Republican on the Senate Intelligence Committee, said in a statement, "It is critical that the perpetrator who betrayed his country be brought to justice for this deliberate treason that jeopardizes our national security."

"These leaks of stolen secret documents endanger our troops, critical terror-fighting operations, our relationships with foreign allies, and sources around the globe who cooperate with America at great risk to their own lives," he added.

While most politicians aimed their fire at Wikileaks, former Alaska Gov. Sarah Palin criticized the Obama administration for its handling of Wikileaks.

More on the WikiLeaks Diplomatic Cables: