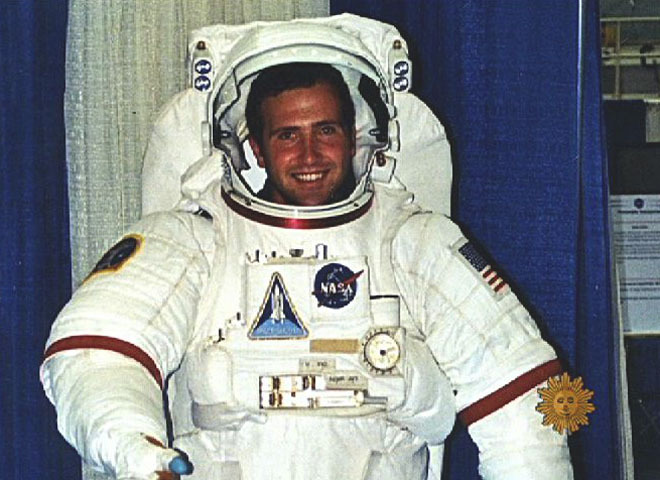 Many a space travel buff is OVER THE MOON now that the shuttle Atlantis is up in orbit, on its final mission. Strangely enough, the moon figures prominently in the real-life crime story our Mo Rocca will be telling:

"What is it like to hold a moon rock in your hand?" Rocca asked.

"It's inspirational. It's motivating, it's - it's awe inspiring," he said.

When is it OK not to treat cancer?

But Roberts' contact with the moon landed him in prison, even though he never made it into space.

His journey to a jail cell began in 2001, when he was accepted into NASA's elite "Co-op" program for aspiring astronauts.

Assigned to the Johnson Space Center in Houston, the 24-year-old Roberts had arrived.

"Had you ever felt that socially comfortable?" Rocca asked.

"No," he laughed. "Definitely not. I was very, very shy growing up, very quiet."

His upbringing hadn't been easy. Disowned by his devoutly Mormon family for having premarital sex with his girlfriend, he was a student at the University of Utah searching for direction ... when he decided to shoot for the moon.

Roberts said when he first got into the Co-op program, he felt nervous at first: "Here's the thing is, I had worked so hard to get there on the hope that I was going to get there, and then when I got accepted, it's now, 'Oh, I gotta keep this up.'

"So it was kind of stressful to figure out, 'How am I gonna do this? How am I gonna outperform, how am I gonna learn as much as possible and take advantage of all this without the kind of money that everyone else has?'"

Married and financially struggling, Roberts made a name for himself at NASA as a risk taker and rule-breaker ... pulling off stunts, like sneaking into the Space Shuttle Simulator.

"So you didn't feel that you were crossing a line there?' Rocca asked.

"No, I felt like I was lucky timing-wise," he said.

But it would take a lot more than luck for him to pull off the biggest heist in the history of NASA.

"Thad Roberts is the most complicated person I've ever written about," said author Ben Mezrich. "He's an incredibly complex character. And I've written about Mark Zuckerberg!"

Mezrich has penned books about the MIT whiz kids who almost brought down the house in Vegas, and about Facebook founder Mark Zuckerberg. Thad Roberts was an even more irresistible subject.

"I've always been writing about these genius kids who live in that gray area between right and wrong," he said. "And here's this kid who basically does 100-yard sprint through that gray area right into the black area, and I don't know why. And I think that kind of blew me away."

That race to the dark side started when Roberts saw some moon rocks in the laboratory safe of NASA scientist Everett Gibson ... moon rocks he would eventually steal.

NASA has 842 pounds of moon rocks, Apollo's total lunar haul. A small percent, including the samples that were in Dr. Gibson's safe, have been exposed to the Earth's atmosphere. Still, they'd be invaluable to any collector.

"So when he gets to NASA, and he sees all these Moon rocks in a safe that aren't being used, they're the most valuable thing on Earth and NASA's just putting them in a corner," said Mezrich. "He feels that the right thing to do is to take these out of NASA, to take these Moon rocks, and use them."

So with the assistance of two younger female interns, Roberts, on a rainy Saturday night, snuck into Everett Gibson's lab. When he couldn't crack the 600-pound safe, he simply loaded it onto a dolly and wheeled it out.

Inside were samples from every lunar landing and a Martian meteorite - a total of just 101 grams, but valued by federal officials at $21 million.

Roberts sighed. "I mean, the simple answer's to say that I did it for love. I did it because I wanted to be loved. I wanted someone to know that I'd literally cared about them that much. And to have the symbol there to remind them of it."

One of his accomplices that night was 22-year old Tiffany Fowler. Roberts - still married to a woman back in Utah - fell hard for Fowler and wanted to, yes, give her the moon.

"But this is someone you'd only known for three weeks," Rocca said.

"Yeah, but I don't think that kind of connection that people really desire requires much time," Roberts said.

"Okay. But three weeks to do something this dramatic?" Rocca mused.

Roberts says he and Fowler planned on making a life together.

"In my own head stealing something wasn't the way I looked at it," he said. "We weren't going to take this money we were getting from it to go buy a yacht or lots of cars or a big house. We were gonna live just the small kind of lifestyle we were, but fund science that might change the world, you know?"

Truth is, Roberts had hatched his plan months before he'd even met Fowler. In fact, a potential buyer for the moon rocks had already been identified - Axel Emmermann, a Belgian mineral collector.

Roberts offered over email to procure and sell him the moon rocks.

Emmerman was suspicious and contacted the FBI. We spoke with him in Antwerp via Skype.

"I think a crime is a crime, no matter how you put it," Emmerman said. "If you're trying to defraud people, you're a criminal."

"We found that the emails were coming, initially, from the University of Utah," said Nick Nance, one of the FBI's investigators. "And then they started coming from Johnson Space Center, which lent credibility to the fact that these could be actual lunar samples that are going to be presented for sale."

On July 20, 2002, the 33rd anniversary of the first moon walk, Thad and Tiffany - after driving all night from Houston - arrived in Orlando, where they expected to sell their loot. And just an hour before the sale, alone in their hotel room, they celebrated their crime.

"I take some of the moon rocks, and I put 'em underneath the blanket in the bed," recalled Roberts.

"You have sex on the moon rocks?" Rocca asked.

Thad Roberts ... desperate? delusional? Or just plain dumb? All kinds of questions come to mind, some more basic than others.

"By the way, is it uncomfortable to have sex on top of moon rocks?" Rocca asked.

"Yeah, it's more uncomfortable than not," replied Roberts. "But it wasn't about the comfort at that point. It was about the expression."

"And no one had ever had sex on the moon before."

"I think we can safely say that," Roberts said.

But the FBI doesn't buy that Roberts did it all for love. "My impressions of Thad are that, you know, he was a very bright, motivated student, one of his goals was to be an astronaut," said Nance. "And I think he had his foot in the door with NASA, was well on his way to reaching that goal. And then this one greedy event, you know, he threw his life away in one fell swoop."

He never again saw the woman he says he stole the moon rocks for. He says he doesn't know how he ever could have pulled the heist off ...

"I'm still trying to understand why you would do something so reckless," Rocca asked.

"Me, too, when you figure it out let me know," he laughed. "Me too, yeah. Because there's just no reason to do it, you know? No reason to go through with it. Sure, parts of it are exciting, parts of it are a good story. But yeah, I mean, your whole life, the chance of being an astronaut?"

But Thad Roberts is not looking back.

"I know your imagination may be part of what got you into trouble in the first place, but in your wildest dreams, what do you see for yourself in the future?" Rocca asked.

"Wildest dreams? Anything's possible," he said. "I think I'm gonna still make a run for space. The private industry is still maybe going on. This might be the big thing of our lifetime and if it is, I'm gonna try to find a way to go.

"Maybe I can go pick up a moon rock, legally this time!" he added. "One that I can keep, yep! Put on my mantle and not have to keep it a secret."