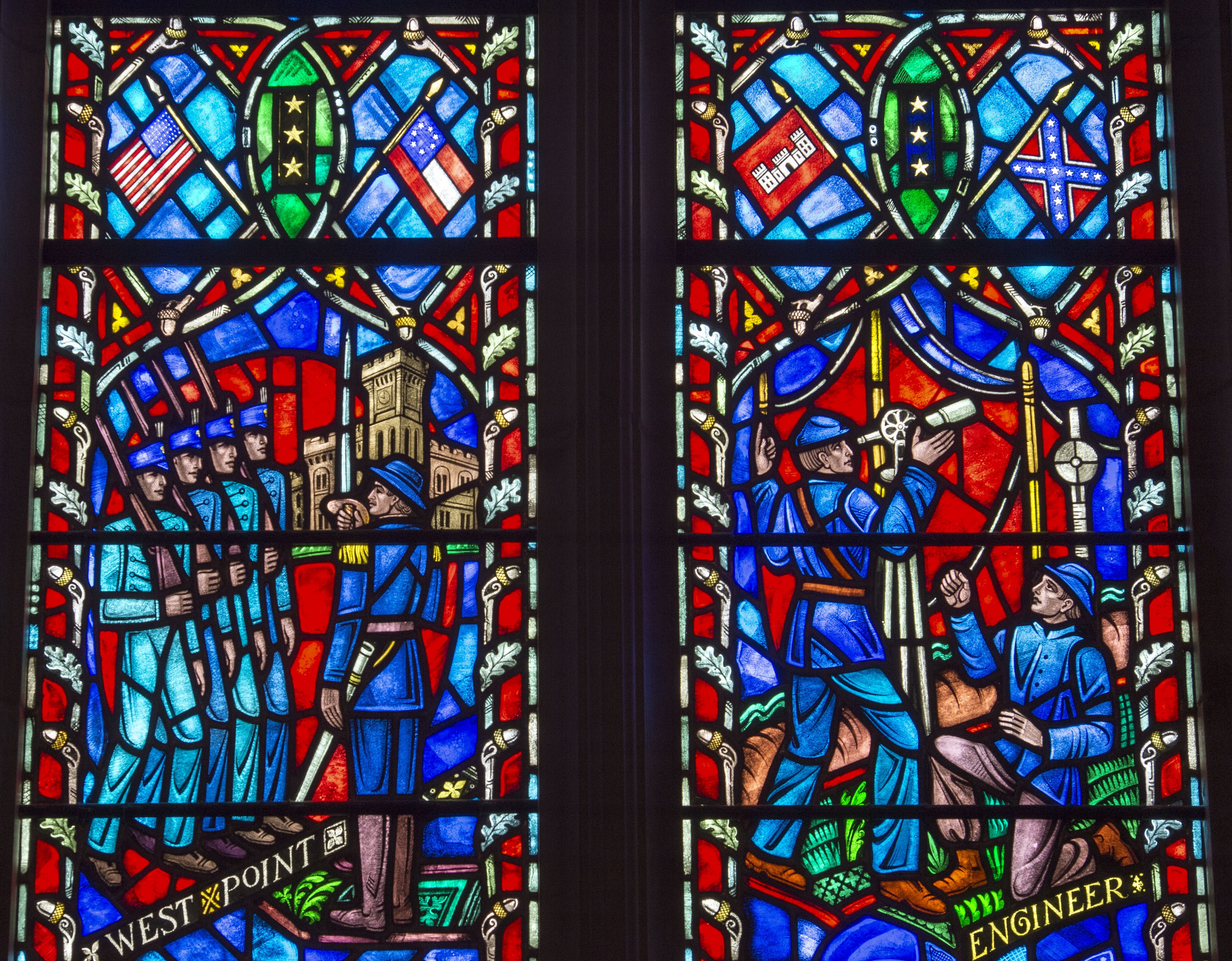 For more than sixty years, former Confederate Generals Robert E. Lee and Stonewall Jackson have been immortalized on the National Cathedral's display of stained glass windows.

But at today's Sunday Service, the Cathedral's Dean, the Very Reverend Gary Hall, called for them to be removed.

"There simply is no excuse for the nation's most visible church to display a symbol of racism, slavery and oppression," he said during a sermon that ended with a standing ovation. "In the wake of the shootings week before last, we have all become aware of how deeply offensive this image is, especially to African Americans."

The panels, which were installed in 1953 at the request of the United Daughters of the Confederacy, include two Confederate flags and depict Lee and Jackson as what Hall described as "exemplary Christian people."

"Like it or not, the Confederate battle flag has become the symbol of white supremacy in America," Hall said from the pulpit.

Shortly after his sermon, Hall was standing in front of the windows as visitors were taking pictures. He said he only found out about the panels after he got letters this week asking what he was going to do about them. He felt he had to take action.

"I didn't know they were here," he said in an interview. "And shame on me for that."

The Cathedral, also known as the National House of Prayer, has held state funerals for three American presidents as well as prayer services for several inaugurations, most recently President Barack Obama's in 2009 and 2013.

Slain civil rights icon the Reverend Martin Luther King delivered a sermon there just days before he was killed in 1968.

Hall says the windows in a place of such national importance and symbolism send the "wrong message."

"The problem with these windows is two-fold. One is the image of the flag itself and that's just offensive to many people," Hall said. "The other issue is the windows put spin on the story. They present Stonewall Jackson and Robert E. Lee as exemplary Christian gentlemen, and I'm sure in some terms they were. It makes no mention of the fact that they fought for the side that ended up being for the extension and preservation of slavery."

Hall is calling for the two stained glass panels to be replaced with windows that tell stories about race relations after the Civil War. He wants the current windows preserved as part of a historical display, but concedes he's not sure whether the church's governing body will vote to approve his request. Throughout Sunday's service he weaved in readings that dealt with the theme of risk, acknowledging that he's taking a risk in calling for the windows to be removed, but telling the congregation it's the right thing to do.

The Cathedral has joined institutions across the country struggling with how to treat confederate monuments installed as symbols of reconciliation after the Civil War. From New Orleans to Lexington prominent statues of statues of Southern generals have been defaced with the words "black lives matter." And in New York, civil rights groups are petitioning to remove Robert E. Lee's name from a street on Fort Hamilton in Brooklyn.

While some visitors to the Cathedral on Sunday felt the windows should be replaced, others felt they represent reconciliation and an important part of the country's past.

"It's erasing a piece of history," said Tim Lovelace who was visiting from Tennessee. "We can't just say okay, let's take this away and it never happened."

For Hall, the image of Jackson reading a Bible under the confederate flag, and Lee being inscribed as a "Servant of God, Leader of Men" - with no mention of slavery -- represents a one-sided version of the Civil War.

"This inscription itself is white-washing history, and this window white washes history," he said pointing to the image of Jackson under a glistening flag. "I don't want to validate the things they did that we now today understand were wrong."