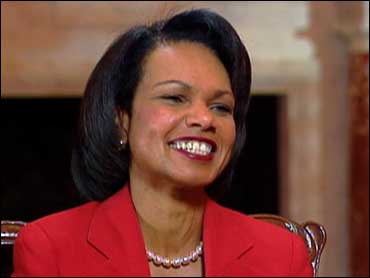 Secretary of State Condoleezza Rice is a key member of the administration that leaves office 23 days from now. She's been America's top diplomat at a time of enormous challenges in foreign policy. This past week she shared some of her thoughts about these historic years with Rita Braver for our Sunday Morning Cover Story.

She's been called the administration's "warrior princess," the true believer who's visited scores of countries, traveling a million miles to implement, explain, and defend, president George W. Bush's foreign policy. And with less than a month to go as secretary of state, Condoleezza Rice still believes in that policy - unmoved and unfazed by low public approval ratings.

And Rice still insists - adamantly, ardently - that the central decision that defines this administration was the right one.

"In his latest book Bob Woodward quotes you saying, 'we should've liberated Iraq, I'd do it a thousand times again.' Would you really?" Braver asked.

"Absolutely. Because I know that the Middle East with Saddam Hussein in its center was never gonna be a Middle East that was going to change in a way that will sustain American interests, values and security."

Rice has been a key player in the Bush Administration for eight years. She was national security advisor in the first term and has proven herself a survivor - even after disagreements with Vice President dick Cheney on a number of issues. She clashed with Secretary of Defense Don Rumsfeld too over management of the Iraq War. He's now gone.

"Well, look I've not won every very internal debate," Rice says, "but one thing that you have to understand is they are debates. They're not fights to the death between people. They are, they're debates."

"You and Secretary Rumsfeld never had shouting matches or anything like that?" Braver asked.

"Oh, I won't say that," Rice says. "But we were all nice friends afterwards, because, people who get to these positions obviously are very tough minded and can advocate very strongly for what they believe."

Of course it always helped rice to have a certain fan-in chief - President Bush.

"You and the president have both described your relationship as almost family - brother and sister and cousin - like that… What do you think that the public doesn't know about him - what don't we understand?" Braver asked.

"I think how much he gets into the detail," Rice said. "I have seen many an aide and myself I've been in that position or a cabinet secretary, go in with a very fine presentation and the president just takes it apart. People would be amazed."

"But when people say, 'he's one of the worst presidents in recent memory, if nothing else…" Braver said.

"I just, I just think it's ridiculous," Rice said.

"Don't you have to think that this last presidential election was kind of a referendum on this president's policies?" Braver asked.

"And you think he would've been re-elected with those popularity polls?" Braver asked.

"I'm not going to talk about popularity polls," Rice said. "The present was re-elected in 2004. That's all he got to do."

And as for his successor…

"There is a widely held belief in Washington, anyway, that you voted for Barack Obama," Braver said.

"And as secretary of state, I'm going to keep my partisan or non-partisan views to myself on that," Rice said. "But I think all Americans were taken with the fact that we were able, after the long history that we've been through, that initial birth defect of slavery that we elected an African American."

Rice, who grew up in Alabama and has bitter memories of segregation, reminded Braver that, ironically, we were talking in the State Department's Thomas Jefferson room - named after the nation's first Secretary of State - a slave holder.

"And I sometimes wonder what he would have thought…' Rice said.

"Thought of you as secretary of state," Braver said.

"There are a lot of pictures of white guys here…all white guys," Braver noted.

"Yes, but it's broken down, it's been a long time now. There was Madeline Albright and Colin Powell and me and now it'll be Hillary Clinton," Rice said. "It will have been along time since there was a white male Secretary of State so maybe Jefferson would have kind of liked that deep down."

As Secretary of State, Rice has been the closest thing the Bush Administration has to a rock star. It's a role she seems a bit ambivalent about. A few years back, she set fashion columnists atwitter when she wore an outfit while visiting troops in Wiesbaden.

"When you go out there and you hear troops cheering…and…whistling…you gotta get a kick out of that?" Braver asked.

"Yeah, but I wore the boots because it was cold," Rice said. "I tried so hard to explain to people that that outfit…was ..it was really a surprise to me that there was any commentary about it."

Rice's parents, both educators, raised her to be perfectly proper - making sure she was schooled not just in academics but also in manners and deportment. Her discipline is legendary: she starts each day with exercise.

"Well, maybe 5:30 when I'm abroad because the truth of the matter is, most people won't start meetings abroad quite as early as we start them here in Washington," Rice said.

She does insist that her work ethic has its limits.

"You ever just like... sleep in and not get of bed and not make the bed and do all that kind of stuff?' Braver asked.

"No! That's where I draw the line!" Rice laughed.

As for her single status…

One thing she has always made time for is music. She once studied to be a concert pianist and earlier this month played for Queen Elizabeth at Buckingham Palace.

Was she nervous playing for the Queen?

"Well, not so much," Rice said. "I'm pretty lucky in that, in playing the piano, unless I'm ill prepared, I tend not to get too nervous."

Anyone who's ever studied Rice knows she is rarely ill-prepared or nervous; still, her handling of foreign policy - from the Middle East to Russia and North Korea - has drawn plenty of criticism.

"Do you get angry, do you get sad or do you just not pay attention?" Braver asked.

"I really don't care, Rita. Look, if you're in this business, and you're not being criticized, you're not doing something right," Rice said, "Because somebody is not gong to like, there's always someone who won't like people who make tough choices."

Of course, Secretary Rice knows that in just a few weeks her tough choices will be personal rather than policy.

Is she going to miss this?

"You only get to have these rooms for a short period of time, you don't own them," Rice said. "So no, I will certainly miss a lot about being Secretary of State, but, there are a few things I'd like to move on to do too."

Rice plans to return to the Hoover Institution at Stanford University and to write a book about her parents and one about foreign policy - no doubt trying to reinforce her version of what the Bush Administration stands for.

"I think we have managed to keep the country safe," Rice said. "I think we've stood for freedom and liberty as something that every man, woman and child should enjoy. And I think we've built a lot of very good relationships around the world that are serving us very well in some of the most difficult challenges of all time."

On The Trail: Great Sand Dunes National Park
Thanks for reading CBS NEWS.
Create your free account or log in
for more features.
View CBS News In
CBS News App Open
Chrome Safari Continue
Be the first to know
Get browser notifications for breaking news, live events, and exclusive reporting.