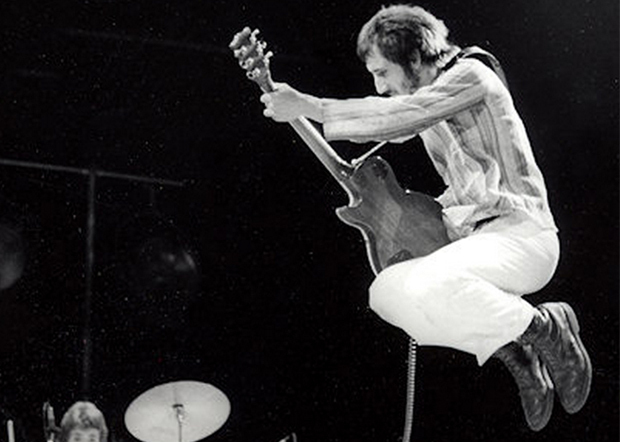 During a 1973 performance of "Won't Get Fooled Again," Roger Daltrey of The Who is seen swinging the microphone wildly onstage at the Cow Palace in San Francisco. Eccentric drummer Keith Moon goes unnoticed until Pete Townshend says to the audience, "he's out cold." Moon was passed out on his drum kit.

Townshend then turns to the crowd and asks if anyone knows how to play the drums. Although members of Santana, Journey and Crosby, Stills, Nash and Young were reportedly in the crowd, a 19-year-old high school senior ended up getting on stage to play the rest of the show. A grainy, black and white video of the incident was captured by the late concert promoter Bill Graham.

Such spontaneous moments are what drive Bill Sagan, the CEO of Norton LLC -- the parent company of websites like Daytrotter.com, ConcertVault.com and WolfgangsVault.com. In 2002, Sagan also bought the rights to Graham's collection -- a massive archive of music memorabilia, concert footage and recordings that include legendary venues CBGB, the Fillmore and Tanglewood.

Sagan gave CBS News a tour of Norton's New York office, where a small staff takes deteriorating music and video tapes and digitizes them into digital files for Concert Vault, the home to the converted archives, and records live performances for Daytrotter, a website that streams live performances by up-and-coming bands.

"We wanted to do something that was different. That no one else was doing," Sagan says. "And this type of music, live performance music, was an area that no one seemed to be focusing that much on. And yet there's these phenomenal archive out there that was fundamentally turning to mold."

Acquiring Graham's archives didn't come without challenges. There were several tapes that were too far gone to convert, Sagan says, and some which were so dilapidated that technicians only had one shot of a successful transfer.

"We settled on live performance music and we settle on the people that actually did the recording of that music. And it all started with Bill Graham -- the largest concert promoter of his era, the man who founded dance hall and concert music."

Sagan's business model seems well-matched with Daytrotter, which Norton acquired in 2008. The website features live sessions from indie rock bands like Mumford & Sons, The Lumineers and Vampire Weekend. But there are also new performances by music legends including Kris Kristofferson and Carly Simon.

Daytrotter was originally a free streaming site and now charges a membership fee of $24 per year. Amid the battle between copyright holders and peer-to-peer file sharing, Daytrotter has managed to maintain a small, but loyal following that is willing to pay for the website's live music sessions.

"I think it's a steal," Austin, Texas, resident Chris Fullerton, 38, told CBS News over the phone. "Not only is it cheap, but you get stuff. You get exclusive vinyls with amazing art work."

Fullerton is immersed in the Austin music scene, with easy access to annual music, film and interactive festival South by Southwest, where Daytrotter has held sessions. He describes the scene surrounding Daytrotter's fans as a culture of people who love music.

"Sean is trying to line up Charley Pride and Glen Campbell. There's a sense of history," Fullerton says. He's speaking of Daytrotter's founder Sean Moeller, who is also the site's main curator. Pride and Campbell are classic country musicians who began their careers in the 1950s. Daytrotter is best known for featuring up-and-coming artists, but is also able to get fresh, live performances out of legacy artists.

Perhaps it's that integration of old and new that makes Sagan's websites unique. Daytrotter and Concert Vault are selling a live music experience, and everything that comes with it. Whether it's Dave Brubeck at the Newport Jazz Festival in 1955 or Mumford & Sons in Daytrotter's studio in Rock Island, Ill., Sagan's companies are selling an experience.

Norton is both a music streaming company and a copyright holder, making companies like Spotify and Pandora both competitors and potential partners. And with the music industry in transition into a digital world, it's almost symbolic of the complicated relationships that have formed between record labels, artists and consumers.

"I think it's one of the most fascinating times in the law," David Bakula, senior vice president of client development and insights at Nielsen, told CBS News over the phone. "There's no going back to where we were before."

At the heart of the uncertainty is the battle between copyright holders and people who illegally download copyrighted material. Bakula points out that people who download music may contribute to the artists in different ways, like buying merchandise or attending concerts.

A recent study released by Columbia University called "Copy Culture in the U.S. and Germany," suggest that peer-to-peer file sharers tend to by about 30 percent more digital music than their non-file-sharing counterparts.

Data suggests that digital downloads continue to grow. According to Nielsen SoundScan, 1.3 billion digital tracks were sold last year versus 316 million traditional albums. But Bakula says that digital albums are selling faster than individual tracks, which is a good sign.

The challenge, Bakula says, is figuring out how to best serve people who want to download music while making sure artists get fair compensation.

Music from Daytrotter and Concert Vault has been pirated and posted on YouTube or torrent sites. Sagan says the company tries to be vigilant about protecting its copyrighted materials, but admits that they can't catch every instance of piracy.

Although Daytrotter and Concert Vault don't enjoy the same attention as Pandora or Spotify, the websites have created a unique niche for itself in the music industry. Sagan says that companies like Spotify and Rhapsody have a database of millions of songs, but they don't have narration, commentary or art.

"We think everything needs context," Sagan says. "We think music needs curation because there's so much of it out there. And if you don't have someone whom you trust curating it, filter it, you don't even know where to start."

Sagan delights in the spontaneous moments that result in live performance. He describes footage from Graham's collection that is posted on Concert Vault of Aretha Franklin performing at the Fillmore West in 1968. After finishing a song, she tells the crowd that she wants to introduce someone from the audience. And it turns out to be Ray Charles.

"To catch that moment when she announces that and when Ray Charles, of all people, walks up on the stage with someone on his right arm or left arm is a phenomenal moment."