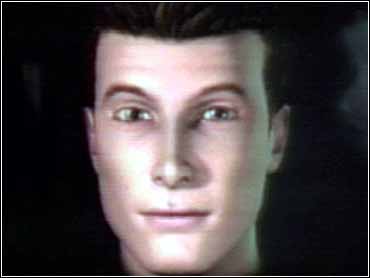 Computer-generated characters are common in movies and video games and on the Internet. But imagine walking into a store and seeing a virtual model hovering in front of you, even welcoming you and selling you the latest makeup or clothing styles.

Cameron has been turning heads at Hugo Boss in New York. "Hi there, my name is Cameron. Welcome to our new showrooms," says the virtual image.

"We can beam characters into your living room," says Lloyd Nathan, CEO of Virtual Characters. "We can have a character greet you when you come through the door."

"We have a series of optics that we've designed that can take a computer-generated image and project it onto a point in space where your eye is trained to focus," Nathan. "What we found is that consumers see this image, and they immediately want to walk up and put a hand through it and see what this is."

Retailers and advertisers, always on the prowl for the new, new thing, are flocking to see virtual characters on display. "We have major cosmetic firms, major fashion firms coming in and saying we want to present our cosmetics, for example, to a consumer in an original attention-grabbing way," Nathan says.

Columbia Business School marketing professor Bernd Schmitt says novelty enables companies to break through the clutter of today's mass messages: "Customers are increasingly interested in having experiences in the store in addition to just buying the product, and this new approach fits right into that experiential strategy."

But will an eye-catching virtual model compel a shopper to buy?
Says Schmitt, "I'm not sure that the customer will really fully identify with that person because it is not a real person; it is a virtual character. But at the same time it will link that character to the brand and thereby build the brand image."

Imagination is the only limit at Virtual Characters. The company plans to tap the location-based entertainment market, and information kiosks are another target. "I could do a computer-generated Russ Mitchell that I could have hovering in free space," Nathan quips. "I could then control what you say effectively."