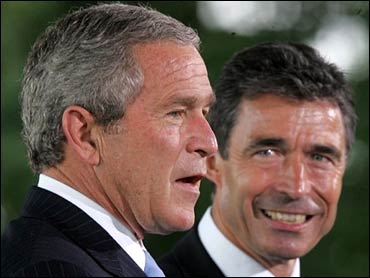 President Bush defended his position on global warming as he and other world leaders made their way toward the Group of Eight summit site, where police - after clashes with protesters - cancelled a rally which was expected to attract 5,000 demonstrators.

As negotiations continued between G8 aides already at the summit site in Gleneagles, Scotland, compromise appeared to be within reach on the two centerpiece issues at this year's meeting of the world's most industrialized nations: relieving crushing poverty in Africa and developing a plan to combat global warming.

Speaking Wednesday in Copenhagen, where he stopped over on his way to the G8, President Bush said he is proud of his administration's tripling of U.S. aid to Africa, and his decision to double aid again by 2010. But his pledge still falls short of the commitment sought by Blair, the summit host.

On climate change, Mr. Bush said warming temperatures are partly caused by manmade emissions. But he renewed his objection to an international treaty that mandates certain reductions. Instead, he said he is going to the Scotland summit to talk about "the post-Kyoto era."

Mr. Bush said that "a better way forward" is to share technology around the globe that would control greenhouse gases "as best as possible."

The leaders of the Group of Eight nations arrive in Gleneagles, Scotland, Wednesday, where the summit will begin with a dinner hosted by Queen Elizabeth.

Protesters, though, are already in place, peacefully pushing for decisive action on Africa and the environment - or violently demonstrating their complete opposition to G-8 and the world order they associate with it.

Early Wednesday, anarchists and anti-globalization protesters clashed with police, smashed car windows, threw rocks and attempted to blockade one of the main approach roads to the exclusive Gleneagles resort hosting the summit. Anti-globalization campaigners have vowed to disrupt the summit.

Summit preparations continued, with leaders' aides meeting behind closed doors to try to reach agreement on the two issues British Prime Minister Tony Blair has made the main focus of this year's summit.

President Bush cleared the way for one compromise last week when he finally agreed, after heavy lobbying from Blair, to pledge to double U.S. support for Africa to more than $8.6 billion by 2010.

One of the biggest lobbyists for Third World debt reduction has been Bono. The Irish rock star will be on hand in Scotland to follow through on that message - meeting with leaders including Canadian Prime Minister Paul Martin.

Compromise has proven difficult on Blair's other key issue - developing a plan to curb emissions of greenhouse gases - with U.S. officials lobbying behind the scenes against setting any specific goals or timetables for emission reductions as called for in the 1997 Kyoto Protocol.

Sir Michael Jay, Blair's representative in the discussions, called the negotiations "pretty intense" but he predicted the G-8 would reach an accord that recognized the problem and the need to combat it.

The United States is the only G-8 country that has not ratified the Kyoto Protocol, which was negotiated by the Clinton administration in Kyoto, Japan, but rejected by Bush shortly after he took office in 2001. The United States has been at odds with most of the other nations regarding global warming, raising questions about the scientific findings on climate change.

"We can all agree we've got ... interrelated problems, and we need to be doing things about them," Hadley told reporters Tuesday aboard Air Force One. "And the interesting thing is, there is a program in action which we think will come out of this G-8 summit, in which we can all agree as to what we're going to do about it."

In addition to boosting aid for Africa, the G-8 leaders were expected to endorse a deal their finance ministers reached in June to wipe out $40 billion in debt that 18 poor countries - 14 of them in Africa - owe international lending agencies including the World Bank. Blair also is pushing the rich nations to reach agreement on cutting farm subsidies that rich nations give their farmers, which depress imports of farm products from poor nations.

In addition to the two key issues Blair selected, the discussions are expected to cover the world's political hot spots, from Iraq to the Middle East peace process and the nuclear ambitions of Iran and North Korea.

The issue of energy is also expected to occupy discussion time as leaders grapple with ways to halt a surge that has pushed global oil prices to unprecedented heights, briefly topping $60 per barrel, and threatening to slow the global economy.

Blair is expected to try to salvage the climate change issue by shifting debate away from disagreements with the United States and toward gaining support for emission controls in China, whose surging economy has made it the world's second biggest producer of greenhouse gases after the United States.