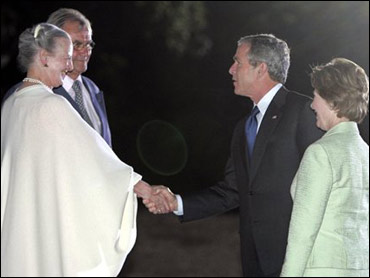 President Bush thanked Denmark in person for sending troops to Iraq, stopping in Copenhagen Tuesday on his way to Scotland for a summit of world leaders.

The leaders of rich nations will be talking about Africa aid and the world's climate beginning Wednesday in Scotland.

Still focused on events at home, Mr. Bush spent a few hours on the flight from Washington looking over material on potential replacements for Supreme Court Justice Sandra Day O'Connor, who announced her resignation Friday.

The briefing papers included background information on the careers and personal lives of more than a half-dozen prospective justices and key rulings they have made, White House press secretary Scott McClellan said.

He said Mr. Bush would "home in on a handful" of prospective nominees over the next few weeks. He discounted speculation that another seat might open, perhaps with the retirement of Chief Justice William Rehnquist, who has been treated for thyroid cancer.

The president and the other leaders will hold three days of talks at the Group of Eight summit in Gleneagles, Scotland, where British Prime Minister Tony Blair, who set the agenda as this year's host, wants to achieve breakthroughs not only on Africa aid but also on climate change.

Mr. Bush, wife Laura and daughter Jenna accompanied the president to Europe. The first lady and Jenna are traveling to Africa after the Scotland summit to join the Bushes' other daughter, Barbara, for about a week. Barbara has been involved in an AIDS project.

The summit follows last weekend's Live 8 concerts that featured top musicians at free rock concerts in 10 cities around the world to raise awareness about Africa's plight and bring pressure on G-8 leaders to act.

The leaders are expected to agree on billions of dollars in new support for Africa, the world's poorest continent.

Beyond Africa, Blair has made climate change a central issue of Britain's G-8 presidency, describing it as "probably the most serious threat we face." He wants an agreement among G-8 leaders on the scientific threat posed by global warming and the urgent need for action.

The United States is the only G-8 country that has not ratified the Kyoto Protocol on climate change. Mr. Bush declared last week on Danish television that meeting the Kyoto emission reduction targets would have "wrecked" the U.S. economy.

Environmentalists would like to see a strong statement on the issue coming out of the G-8 meeting, even without Mr. Bush's concurrence.

French President Jacques Chirac on Sunday called for a statement to include specific mention of Kyoto, which took effect in February and obliges participating industrialized nations to reduce their combined greenhouse gas emissions.

Mr. Bush, in an interview with Britain's ITV television Monday, renewed his insistence that Washington would not sign Kyoto or any similar deals limiting gas emissions. Still, he described climate change as "a significant, long-term issue that we've got to deal with" and acknowledged that human activity is "to some extent" to blame.

"My hope is — and I think the hope of Tony Blair is — to move beyond the Kyoto debate and to collaborate on new technologies that will enable the United States and other countries to diversify away from fossil fuels so that the air will be cleaner and that we have the economic and national security that comes from less dependence on foreign sources of oil," Mr. Bush said.

On Tuesday, Mr. Bush became only the second sitting U.S. president to visit Denmark, where he was expressing appreciation for the several hundred troops the Scandinavian nation has sent to Iraq and Afghanistan. Trans-Atlantic relations and advancing freedom around the world also will be on his agenda during talks Wednesday with Denmark's prime minister, Anders Fogh Rasmussen.

Many in Europe are angry with Mr. Bush about the war in Iraq. Public opinion about the war has been slipping recently in the United States, and there have been anti-war demonstrations in Europe.

Police braced for demonstrations away from the summit. On Monday in Edinburgh, groups of up to 200 demonstrators, some dressed as clowns, roamed the streets, banging drums, blowing whistles and taunting officers. Police said they had made nearly 30 arrests.

The demonstrators want rich nations to provide even more aid help to Africa than they've already pledged and be held accountable for whatever they promise.