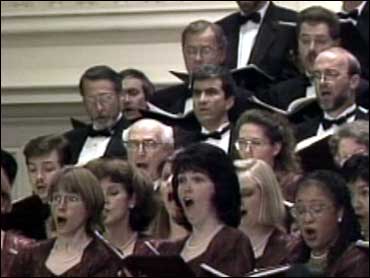 Sunday Morning correspondent Bill Geist discovers that there is something about singing your complaints with a group of other disgruntled people.


It's that time again - the holiday choral season, around the world.

How beautiful the voices of this choir in Helsinki, and of what pray tell do they sing?

Their subject matter isn't as cheery as their music sounds:

"I can't escape the headlines of the tabloids..."
"The weather's always foul."
"I don't get [bleeped] enough."
"Jobs go to China."
"Tramline three smells of pee, it's not fair."

Losing jobs to China? Trams that smell like a bathroom? Not exactly "Joy to the World," now, is it? What holiday is this? Whining Day?

This, you see, is a complaints choir, one of a growing number of these bizarre choral groups that are turning complaining into an art form. They're bellyaching in four-part harmony from Jerusalem to St. Petersburg.

"Bus no. 9 goes every 5 minutes to Vasilievsky, but it never comes back," the St. Petersburg choir sings. "Why did you, Peter, miraculous builder, build our city in such pestilent climate amidst mosquitoes?"

"The melody itself is very cheerful so that there's this huge contrast between word and melody," Tellervo said. "In Finnish we have this word 'valituskuoro,' which literally means complaints choir, and it's basically an expression you use to describe a situation where a lot of people are nagging and everybody has been complaining. So we thought how could it be to take this word literally and actually make a complaints choir?"

Their first choir was in Birmingham, England.

"They said people in Birmingham complain so much and Birmingham even is called like a-- hole of England," Tellervo said.

"It's the most ugly city I have seen," Oliver said. "And so it was really the perfect place to start."

Tellervo and Oliver just organized a choir in Chicago with Frank Mauceri who runs a small record label in town. The first step was putting out a call for complaints.

"These are some of my favorites," Frank said. "'No one knows how to use apostrophes anymore.' I received just one complaint that the weather is too cold in Chicago, but I received one complaint saying that their toast was too cold."

Next he sought out singer-complainers.

"We found a number of participants that were incredibly enthusiastic about complaining," he said. "We have some good complainers here and I'd put them up against complainers in any city."

They do play a mean game of complaining. They let me toss in a complaint since I used to live in Chicago: "I was born and remain a Cubs fan."

They wrote down their pet peeves, from the trivial to the cosmic, and read them on stage:

"People with ugly feet shouldn't wear sandals."
"Chicago has no mountains."
"I'm too smart for the men I date."
"Everyone is a bunch of morons."
"No one ever throws me the ball."
"I live in the city and can't see the stars."

"There are some things that really repeat from country to country, like public transport and unfriendly people and lack of love," she said.

And cell phones seem to reoccur.

"The battery on my mobile is always going flat, and all ring tones are just as irritating," the Helsinki Choir sings.

Of course, the weather is a common theme.

"Our ancestors could have picked a sunnier place to be," Helsinki sings.

In Juneau, they sing that "It rains and it rains."

Other complaints are peculiar to their part of the world.

"In the public sauna they never ask if it's OK to throw water on the stove," is not something that would likely be heard in the United States. Neither would: "We always lose to Sweden in hockey."

In Chicago, composer Jeremy Jacobsen had to make music from this litany of complaints. First, he has his choir speak the lyrics:

"Why are all the single men insane?"
"My damn boss outsourced my job but he gets to keep his."
"Teachers get nothing, entertainers millions."
"Everybody is a moron."
"And I am still thinking about sex."
"The more efficient I am, the more work they pile on me."

Jeremy works through the problem areas and then they sing. It takes a lot of practice for a complaints choir to strike just the right sour note. Tellervo was encouraged.

The choristers were finding it cathartic.

"I like the feeling that everybody's singing the same complaint as you," a singer named Amy said. "You feel validated."

You know how when you complain, no one really wants to hear it? Well, here in Chicago they were buying tickets for the privilege, filling the auditorium at the Museum of Contemporary Art.

No one was quite sure how they'd react to this unique performance, but, to say the least, there were no complaints at any of their stops around the city.

"It seems this complaining is really creating certain kind of feeling uniting when they see people on the other side of the world complaining about exactly the same things," Tellervo said.

Just think of all this as a kind of "We Are the World" for the disgruntled.

"It shouldn't be allowed! It's a crying shame! Who's in charge here? Who's to blame?"