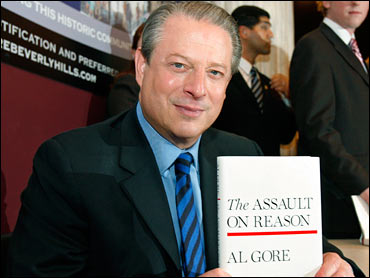 This column was written by Stephen Spruiell .


Al Gore took to the stage at the 92nd St. Y in New York Thursday night to talk about his new book, "The Assault on Reason." It was classic Gore: A moralistic sermon so forcefully articulated in his pronounced drawl that at times, particularly during the long harangues on global warming, one could be forgiven for mistaking him for a tent-show revival preacher. These days, however, Gore reminds one less of an Inconvenient Truth-telling Billy Graham than a Democratic doppelgänger of former Speaker of the House Newt Gingrich.

Think about it. Both men are flirting with the idea of running for president. Both have used their time away from politics to establish lucrative sidelines as authors and advocates for their core political causes. And both have acquired the habit of frequently criticizing the way the media cover politics in general and presidential campaigns in particular.

In "The Assault on Reason," Gore blames the "grievous mistake" of the Iraq invasion in part on the fact that Americans spend too much time vegging out, passively allowing themselves to be manipulated by modern-day "media Machiavellis" (read: FOX News). Gore writes: "While American television watchers were collectively devoting 100 million hours of their lives each week to these and other similar stories, our nation was in the process of more quietly making what future historians will certainly describe as a series of catastrophically mistaken decisions on issues of war and peace, the global climate and human survival, freedom and barbarity, justice and fairness."

Thursday night's event moderator, PBS host Charlie Rose, asked Gore for his thoughts on the 2008 presidential election. Gore responded with a familiar complaint: "Charlie, what the American people are hearing and seeing is, too often, how they comb their hair, what they're wearing, what the horse race is, what the latest uptick or downtick in the polls are."

At another point, Gore ragged on the shallowness of cable-TV news obsessions: "There is more time spent in the public forum, now, on Anna Nicole Smith, Joey Buttafuoco, whether Britney shaved her head, whether Russell Crowe threw a telephone at a hotel concierge" — predictable laughter — "than there is on whether or not the human species is going to safeguard the habitat of the Earth for future generations" — equally predictable applause.

Gingrich sounded only slightly less preachy when he and former New York governor Mario Cuomo held a "Lincoln-inspired" debate at the Cooper Union in March — an effort, they said, to highlight the degraded state of American public discourse. Of a story about a minor feud between Democratic candidates Hillary Clinton and Barack Obama to which the press was devoting a lot of attention at the time, Gingrich said, "The news media loved [it], because it was simple, it avoided ideas, it was negative and it was gossip. What more could you ask for?"

It should come as no surprise that these two cerebral policy wonks should be frustrated by a process that puts an intense focus on personality traits and historical baggage. Either man could easily beat his party's current nominees in a substantive debate. But neither can successfully run for president in the current media environment, even though both men badly want to.

Gore has far too many weaknesses to survive another run at the White House. For one thing, the Democrats have made great strides by running against alleged (and real) Republican-party lawbreaking scandals. The last thing they need is a public rehashing of the Buddhist temple fundraiser and "no controlling legal authority."

On CNN's "Reliable Sources" last Sunday, Howard Kurtz asked David Frum about the media's intense interest in a Gore candidacy. Frum replied, "Well, there is a kind of Lucy-with-the-football aspect to this, which is, 'Give us an opportunity to turn savagely against you.'"

Thursday night, Rose gave the audience a sneak peak of the kind of thing Frum was talking about. When Gore launched into a lecture about the many ways the Iraq war should and could have been avoided, Rose interrupted: "With respect, if you'd run a better campaign in 2000, we wouldn't be in this war." Ouch.

Gingrich's flaws are just as obvious. Start with the fact that he recently admitted to having an affair at the height of Clinton's impeachment. Add to that the latest polls, which show his negatives higher than any other Republican candidate's. Is it any wonder that Gingrich and Gore have been touring the country complaining about the personal, poll-driven nature of modern campaign coverage?

The way that conservatives and liberals want these men to enter the 2008 race speaks to a deep dissatisfaction on both sides with the current crop of candidates. Both men have become base favorites, because for the past seven years they have mapped out their positions free from the constraints of elected office. Gingrich is untainted by the Republican Party's recent scandals and reminds many conservatives of a time before the party lost its way. Gore hasn't had to cast a vote on any of the difficult Iraq-war legislation that has gotten his party's potential frontrunner, Hillary Clinton, in such a jam.

Gingrich says he won't even think about running until October (at which point, he told a Dallas radio station recently, he'll probably end up running). Gore, for his part, maintains that he doesn't think he's going to run but hasn't ruled it out. If either man does decide to run, one thing is clear: They're not laying the groundwork for a campaign against any of the other candidates. If they jump into the race, they'll be running against the system.
By Stephen Spruiell
Reprinted with permission from National Review Online