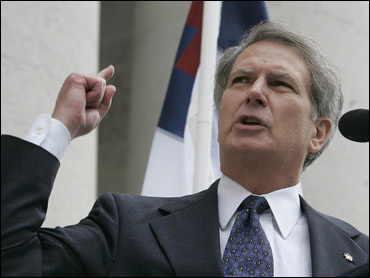 Whatever your politics, its hard not to hold some admiration for Walter Jones, the veteran North Carolina Republican congressman who survived yet another primary challenge Tuesday night. Once a stalwart movement conservative, his transformations over the years have provided a constant source of irritation to his party's leadership. A man of conviction in Washington, he is by definition a nuisance.

Jones' various heresies, most notably his passionate objections to the Iraq War, have made him a permanent backbencher despite his more than 20 years in the House. He's lost out on prized committee assignments. And somehow every cycle, a well-funded Republican challenger is drafted to unseat him. Yet Jones has consistently refused to fall in line, most recently voting against the Obamacare repeal and the GOP's tax overhaul.

This is not to say that Jones is a moderate, at least in the typically used sense of the word. "Reactionary moderate" might be a better term, given his social conservative bona fides, Old Right populist tilt, and stubborn unwillingness to switch parties. Democrats tried to bring him on board during the nadir of the Bush years, but despite the obvious loathing he inspired among the GOP's leadership, his opposition to legal abortion kept him from jumping ship.

Given his traditionalism and stance on Iraq, it might be understandable to think of Jones as a kind of Buchananite crank, but that doesn't do him justice. It might be better to see him as a kind of stand in for the average Republican voter in the post-crash era, which is to say someone who doesn't much like the GOP and wishes it would better accommodate the concerns of working people. By extension, it could be argued that Jones' iconoclastic take on conservatism offers one of the more plausible, or at least more benign, visions for a post-Trump right.

It's not uncommon for prominent Republicans to convert to Catholicism, but unlike many others, Jones did so without some precipitating scandal that made it politically advantageous to get right with the Lord. And looking at his career, it's hard to avoid the sense that he's animated in part by the Church's social teachings and a healthy Catholic guilt.

Before his peacenik turn, Jones had been a public backer of the Iraq invasion, and famously tried to rename french fries "freedom fries" in congressional cafeterias. He harbored some private doubts about the war but trusted his party to do the right thing. When that conflict turned into the fiasco many on the left had predicted, he admitted he'd been wrong and abruptly turned into one of its most trenchant critics.

Fifteen years after the invasion of Iraq, there is no shortage of politicians who offer timid mea culpas for supporting it. But Jones instead decided that real acts of contrition were necessary, and still writes heartfelt letters to the families of every service member killed in action in that war and the ongoing conflicts that stem from it. He also became one of the GOP's most fervent voices for peace, calling for an end to the Afghanistan War and opposing military adventurism in Syria and Libya.

This is not the sort of penance we expect from politicians, and his party rewarded it with a sentence of internal exile. He was kicked off his plum spot on the Financial Services Committee after the 2012 election, yet continued to challenge the GOP leadership, voting against John Boehner's bids for House Speaker in 2013 and 2015. He also had a role in torpedoing Kevin McCarthy's bid for the speakership when Boehner stepped down.

Certain to be reelected in November, Jones says that this will be his last term in office. And that is a shame. Coming from an Outer Banks district that includes Camp Lejeune and went overwhelmingly for Donald Trump, he votes with the president roughly 50 percent of the time. His politics can be hard to quantify using traditional metrics like outside group ratings, which in his case are all over the place. But from his voting record and public statements we can detect underlying themes: a kindly puritanism, a deep reluctance to use military force, a libertarian antipathy to new laws and spending, a populist suspicion of concentrated financial power.

It's all a bit reminiscent of the inchoate big-government conservatism that Trump ran on during the Republican primaries, but without the president's cynicism, offhand cruelty, and sideways embrace of white identity politics. And as such it could serve as a very general roadmap of what a worthwhile center-right party might look like once Trump leaves office.

To echo a point sometimes made by conservative commentator Ben Domenech, it would be best if the GOP were destroyed and replaced with something better. And given Jones' relationship with the party's leadership, it's easy to suspect he agrees. Of course, constructing what comes after the effective dissolution of the current GOP will be the hard part, and anyone as ideologically scattershot as Jones can at best only provide a lightly traced vision of what that would look like.

And maybe that is too much to ask for, or unworkable in practice. There is little reason to believe that the post-Trump right will be any better than the one we have now. If anything, given how our politics has unfolded in recent years, the safer bet is that it will be somehow worse. But if sometime in the future Jones is seen as something of a profile in courage, as an example right-leaning lawmakers would try to live up to, our country will likely be better off for it.

Congressman from Nebraska indicted for lying to federal investigators
Will Rahn