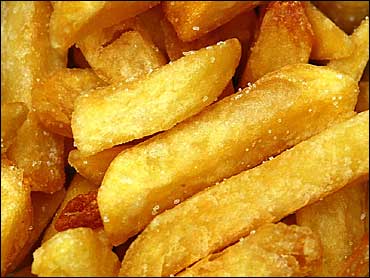 House cafeterias will be serving fries with a side order of patriotism Tuesday with a decision by GOP lawmakers to replace the "French" cuisine with "freedom fries."

"This action today is a small but symbolic effort to show the strong displeasure of many on Capitol Hill with the actions of our so-called ally, France," said Rep. Bob Ney, R-Ohio, chairman of the House Administration Committee.

The House action follows moves by several restaurants around the country to remove "French" fries from their menus to protest French opposition to U.S. military action in Iraq.

Also leading the anti-French campaign was Rep. Walter Jones, R-N.C., who noted in a letter to colleagues that Cubbie's restaurant in Beaufort, N.C., in his district, was now serving "freedom fries."

"Watching France's self-serving politics of passive aggression in this effort has discouraged me more than I can say," Jones said.

Members of Congress have been sharply critical of France for threatening to veto a new U.N. resolution holding Iraq in violation of disarmament agreements and paving the way for a military strike against the Saddam Hussein government.

Another Republican, Jim Saxton of New Jersey, has introduced several bills to ban Pentagon participation in this year's Paris Air Show and to make sure that France does not participate in any reconstruction projects in Iraq.

Robby Mook says Clinton agreed to give Trump-Russia material to reporter
Thanks for reading CBS NEWS.
Create your free account or log in
for more features.
View CBS News In
CBS News App Open
Chrome Safari Continue
Be the first to know
Get browser notifications for breaking news, live events, and exclusive reporting.