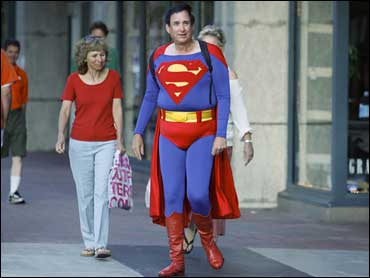 Where else can you find Batman, Iron Man, Spiderman, Superman, Wonder Woman and Hollywood celebrities at the same place and same time for a common cause?

It's a convention as colorful as the comic books it celebrates, attracting over a hundred thousand fanatical fans.

"Comic Con," an international comic book convention held in D.C., has grown into a four-day event with a multitude of screenings, stars and exhibits and a place where fantasies become a reality, reports Early Show national correspondent Hattie Kauffman.

There is so much to take in that it very well might take a superhero, or someone dressed like one to see it all.

"It's so wonderful, it's every form of entertainment you can possibly imagine, condensed into one amazing show," two "Comic Con" attendees told Kauffman.

The four-day comic book excursion is open to the public, but it has grown so big that scalpers are selling tickets for over 200 dollars a piece, which may involve standing in line for hours to get in.

Celebrity attendees don't have to worry about that though.

Although the new "X-Men" movie won't be released until next year, that didn't stop Hugh "Wolverine" Jackman from making an appearance.

"He's not a nice guy," Jackman said about his character, Wolverine. "He's got anger issues. He's pretty tortured. He's got a war going on inside of him. He's an animal, is he a man, what is he? It's great anger management training for me, it's great therapy."

Actors Keanu Reeves and Jennifer Connelly teased fans with a sneak peak of their remake of "The Day The Earth Stood Still."

"I think with technology now, our version of it has a lot more spectacle, a lot more visual effects," Connelly said.

"This is DC Universe Live, a massive multiplayer for PlayStation 3," said Ricardo Torres, editor-in-chief of gamespot.com. "It's the D.C. Universe and it's all for you to play in."

A movie clip based on the video game "Max Payne," was screened. Mark Wahlberg will take on the role, which is extremely popular in the gaming world.

"To be able to go out there and kick some ass again and bust heads, it was very satisfying to me," said Wahlberg. "And fans like myself and guys just love it."

"Everybody wants to be a hero," Reeves said.