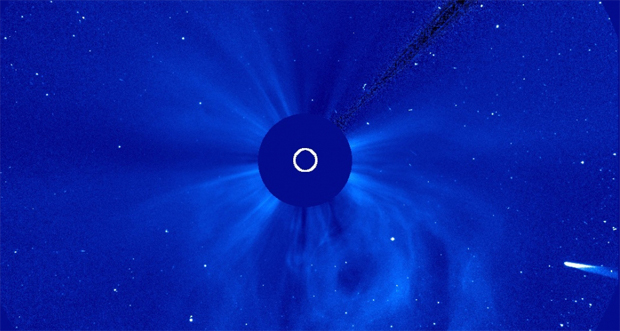 Astronomers around the world are closely monitoring Comet ISON's plunge through the inner solar system and awaiting data from a fleet of space telescopes to find out whether the enigmatic chunk of ice will survive a blistering kamikaze-like Thanksgiving Day flyby of the sun.

In the final stages of a multi-million-year fall from the frozen outer reaches of the solar system, ISON, streaking through space at more than 200 miles per second, will slingshot around the sun just after 1:30 p.m. EST Thursday, passing within a million miles of the star and enduring a hellish combination of gravitational stress and extreme temperatures.

If it survives its pressure-cooking encounter, ISON could put on a spectacular show in Earth's pre-dawn skies the first week or two of December as it races back toward the depths of space, possibly sporting a long tail of ice and dusty debris boiled off the surface and carried away on the solar wind.

At that point, in early December, it may be visible in the eastern sky just before sunrise, and again in the evening right after sunset, just above the western horizon where the sun went down.

Even if the comet breaks up under the stress of the flyby, astronomers say the surviving fragments still could put on an excellent show, rivaling or exceeding the spectacle of Comet Lovejoy, which graced southern hemisphere skies last year.

But it's also possible ISON will simply break up and boil away, becoming a hard-to-see dud reminiscent of Comet Kohoutek in 1973.

"There are three possibilities when this comet rounds the sun on Thanksgiving Day," Don Yeomans, a senior research scientist at the Jet Propulsion Laboratory in Pasadena, Calif., said in a NASA interview. "It could be tough enough to survive the passage of the sun and be a fairly bright naked-eye object in the early morning sky in the first week of December.

"Or, the sun could actually pull it apart. The tidal forces could actually pull this comet apart, and so it becomes several chunks rounding the sun and putting on a great show, again, in early December. Or, if the comet is very weak, it could break up into a cloud of dust and be a complete bust in December."

Astronomers can't wait to find out what happens. And thanks to a fleet of space telescopes, they'll have a ringside seat. That's because ISON's discovery by two Russian astronomers in September 2012 gave astronomers plenty of time to plan and coordinate a multi-faceted observing campaign.

Along with ground-based observatories, the Hubble Space Telescope followed the comet until it moved too close to the sun. NASA's Mars Reconnaissance Orbiter photographed the comet as it passed the red planet, as did the Messenger spacecraft orbiting Mercury.

Now, a battery of space and solar telescopes are tracking the comet, beaming back a steady stream of visible-light and ultraviolet images, infrared pictures and even X-ray data as the comet's tail interacts with the solar wind.

Carey Lisse, a senior research scientist at Johns Hopkins Applied Physics Laborator in Laurel, Md., told reporters Wednesday he believes there is a 60 percent to 70 percent chance ISON will break up during its encounter with the sun.

"Picture a comet made at the very beginning of our solar system, a loosely bound collection of ice and dust," Lisse said. "I like to think of it as a loose snowball. ... And so this comet isn't very strong. I think the density is maybe a half or a third that of water and it's rather weak, it's about as strong as maybe a very dense, well-packed snow bank.

The comet, which measures three-quarters of a mile or so across, has exhibited sudden outbursts of light and "there have been claims of fragmentation," Lisse said. "We know they've definitely seen outbursts, we're not sure if it's broken up or not. The comet hasn't been getting as bright as we expected over the last few days, but it's suddenly just jumped up again.

"This comet is giving us quite a ride," he said. "It's going to be hard to predict exactly what's going on."

Like all comets, ISON is a left over from the solar system's birth, a frozen concoction of the original cloud of dusty debris that coalesced to form the sun and its retinue of planets 4.5 billion years ago.

A spherical cloud of such icy debris extends from the outermost planets halfway to the nearest star. Several million years ago, a passing star or perhaps an unusual planetary alignment produced a gravitational disturbance that changed ISON's course ever so slightly and sent it careening inward, taking uncounted eons to reach the inner solar system.

Unlike some comets, which make repeated trips to the heat of the inner solar system following long, elliptical orbits, ISON is making its first visit and thus represents a pristine sample of the solar system's building blocks. Given the geometry of its trajectory, the sun may fling the comet completely out of the solar system.

Assuming, of course, it survives the encounter.

"Comet ISON is a relic, it's a dinosaur bone of solar system information," Lisse said. "This comet has been in deep freeze in the Oort Cloud, halfway to the next star, for the last four-and-a-half billion years. It's just been coming in over the last few million years ... and we're here today with our spacecraft and our telescopes, watching it come in.

"It's going to go within a million miles of the sun's surface and go from the deep freeze, where it's been for four-and-a-half billion years, to the furnace of the sun. And we're going to watch it bake and boil, not just its ices like comets usually do, but actually even its dust, and we're going to see all that evaporate."

By studying the comet and the debris boiled off its surface, scientists will get a first-hand look at the constituents of the original solar nebula, learn more about the structure and density of comets and perhaps gain insights into how cometary material came together in the distant past to build the sun and its family of planets.

ISON is the first known comet from the distant Oort Cloud to follow a trajectory carrying it so close to the sun. So-called "sun grazers" are not uncommon, but most are believed to have originated with a larger comet that broke apart in the distant past.

ISON is in a class by itself and to astronomers, a gold mine of priceless data.

"It's important that people appreciate that we have never seen a comet like this, we've never seen a comet that is both dynamically new from Oort cloud and in a sun-grazing orbit," said Karl Battams, an astrophysicist at the Naval Research Laboratory in Washington. "So we don't really have any past experience we can use to judge or predict what's going to happen to this one.

"It's being a very peculiar comet in its behavior, but it's also being a fascinating object. And regardless of whether it burns up in the sun or fizzles out completely before it even gets there -- or turns into a brilliant night sky object -- it's already been a huge victory for science."

Whether the public agrees or not remains to be seen. Because of its trajectory and brightness early on, ISON was hyped in some quarters as the "comet of the century" long before anyone had any idea what it would actually do as it neared the sun.

And those high expectations worry astronomers.

"There was a comet in 1973 called Kohoutek, which was a wonderful comet for science but a disaster for the public and the press," Lisse said. "It was over hyped, if you will, as the comet of the century. It was seen very far out -- the story is going to sound very familiar -- it was extremely bright, it looked like it was getting rapidly brighter. And then it stopped getting bright.

"It went around the sun and then came by close to the Earth and it was a burned out cinder, very faint, nobody could see it from the ground."

He said dashed expectations in the wake of Kohoutek soured the public on comets and promises of spectacular sky shows. This time around, he said astronomers tried to "make sure we never had expectations at that level."

While he thinks it's likely ISON will break up, he still has hopes for a decent post-encounter light show.

"Lovejoy was destroyed, it fell apart within two or three days of passing through the sun's outer atmosphere, or corona," Lisse said. "But it was a fantastic object in the night skies (of the southern hemisphere). So that's one scenario.

"The other scenario is if ISON becomes a burned-out cinder, loses most of its really easily boiled off stuff in the sun but survives and then there isn't much material left to come off the comet, that's the Kohoutek scenario. Then it'll be faint and not very exciting from the ground."

But that's not what he expects.

"I think more likely is the Lovejoy scenario," he said. "We may lose the comet totally, you'll have a lot of very sad scientists who can't watch it after it goes by the sun, but you'll have a beautiful paintbrush swath on the sky."