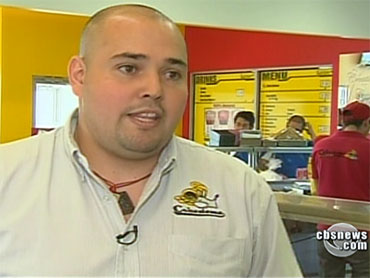 Anthony Anderson, the rotund comedic co-star of "Kangaroo Jack" and the original "Barbershop," has been arrested and charged with aggravated rape while shooting a movie.

The 33-year-old actor was accused by an unidentified woman of luring her into a trailer on the set of his latest movie, "Hustle & Flow," and sexually assaulting her with the film's assistant director, Wayne Witherspoon.

Both men were charged on Wednesday after being taken into custody by the Shelby County Sheriff's Department.

The incident occurred Tuesday afternoon at the Shelby County Correctional Center, a penal farm on the outskirts of Memphis, where filming was under way for the movie.

"And she ran out nude," Shular said.

Both suspects were released Wednesday evening after posting $20,000 bond each.

"Anthony is a happily married family man who has never been accused of — no less involved in — anything remotely like this, and we are confident that when all the facts come out, he will be completely exonerated," Mayer said.

Mayer said it's unclear whether Anderson will return to work on the movie, but said he will likely remain in the Memphis area for the time being.

A representative for Witherspoon, 42, could not immediately be located.

Anderson, who's married with two children, was raised in Compton, Calif., and has appeared in an array of comedies, including playing one of Jim Carrey's illegitimate genius sons in 2000's "Me, Myself & Irene."

The roly-poly actor specializes in physical comedy — often at his own expense. He has been brutalized by Jet Li in "Romeo Must Die," pummeled by Steven Seagal in "Exit Wounds," crushed by a cash machine in "Barbershop" and menaced by a rogue marsupial in "Kangaroo Jack." He also starred in the WB's short-lived sitcom "All About the Andersons" last year, which was a fictionalized version of his real life.