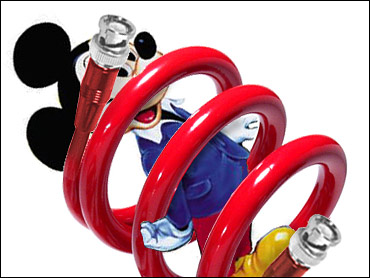 The cable giant Comcast Corp. is dropping its takeover bid for The Walt Disney Co., saying Disney management has made it clear it has no interest in putting the two companies together.

The decision was announced Wednesday by Brian L. Roberts, president and chief executive of Comcast, who said Disney management's lack of interest led him to conclude it was time to abandon the merger.

Philadelphia-based Comcast stunned the industry Feb. 11 when it offered stock valued at $54 billion at the time for the media and entertainment powerhouse.

But Disney rejected the proposed deal.

"We have always been disciplined in our approach to acquisitions," Roberts said in a statement. "Being disciplined means knowing when it is time to walk away. That time is now."

The Comcast offer was made as Disney and its longtime leader Michael Eisner were facing pressure from shareholders including one-time board member Roy Disney who were unhappy with the company's financial performance and its stock price.

Shareholders made their dissatisfaction clear at the annual meeting in March when 45.3 percent of all votes cast withheld support from Eisner for re-election to the board.

After the meeting, Disney's board split the roles of chairman and CEO, naming board member George Mitchell as chairman and leaving Eisner as CEO.

Eisner and the board nonetheless have repeatedly insisted Disney is headed in the right direction, and did not need to team up with a distribution company like Comcast.

Comcast is the nation's largest cable company with 21 million subscribers, and has a stake in several cable networks, while Disney owns the ABC and ESPN television networks, in addition to movie studios and theme parks.

The news that Comcast has dropped its Disney bid comes as no surprise after a series of published reports in the past several days, reports CBS MarketWatch's Jon Friedman.

Comcast tried to take over Disney in the first place because it wants very much to diversify its revenue and earning streams. Comcast seeks to expand significantly its content segments because such providers as Disney — and Time Warner and Viacom — have profited handsomely through their movie divisions and by showing their entertainment wares on cable and network outlets in the U.S. and around the world.