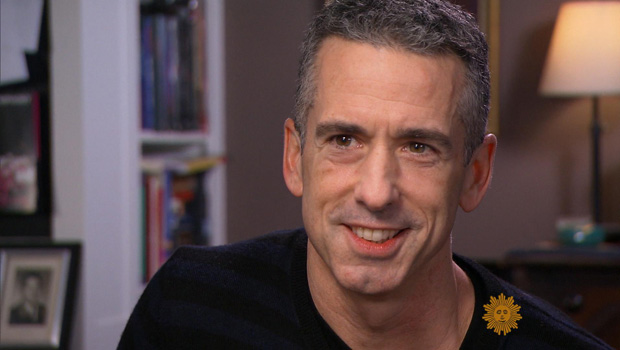 "Dear Dan" is how one might address a question to one of America's cutting-edge advice columnists. In his own way, he sees himself as the successor to one of the most famous dispensers of guidance of all. Erin Moriarty of "48 Hours" makes the connection:

For nearly fifty years, Ann Landers was the grande dame of advice columnists.

But times change. Today, the lost and the lovelorn are turning for advice to this straight-talking gay man.

His name is Dan Savage, and at his office in Seattle he gets inspiration from Ann Landers' desk. He bought it at auction just months after her death in 2002.

"This is my prized possession," he said.

Moriarty asked, "Do you think when you are responding to some of these questions, Ann Landers is probably turning over in her grave?"

There are podcasts, and live shows:

"Next question: 'I am a 25 year old female. I started feeling attracted to girls in college. One year ago I felt attracted to men again and lost interest in women. What is going on?' I think the operative word there was 'college'!"

... As well as the weekly newspaper column he's been writing for almost 25 years, Savage Love. It's syndicated in more than 40 papers.

And in 2010 he helped launch the It Gets Better Project to help prevent suicides among gay youth.

Thousands seek his advice, and one of his busiest days is not Valentine's, but TODAY!

"It was the letters on February 15th that drove me crazy," he said, "because people would write me and say, 'You know, we went out to dinner. We did this, we did that. We came home and he fell right asleep,' or 'We fell right asleep and we didn't make love, therefore obviously there's a real problem in our relationship.'"

Which led him to one piece of advice: "Don't go out to dinner and then go home to have sex. Have sex, then go out to dinner. And you're much less likely to be writing me a tear-stained email (not that that's possible) on February 15th."

Savage grew up in Chicago, the third of four children in a strict Catholic family, and was inspired by his own mother.

"I was the gay-mama's-boy-at-home kid," he said. "And I would be there within earshot while the ladies were all pouring out their marital problems and my mother was giving them advice."

Savage isn't afraid to court controversy. He's enraged many conservatives with his public disdain of the Bible's treatment of homosexuality. And he inflames others with his views on cheating.

"No; I think there are times and circumstances under which adultery is okay," Savage said. "And cheating may be the more loving to do."

When one-half of a couple loses interest in sex, Savage insists cheating is preferable to divorce, especially for couples with children: "The standard advice to the partner who would still like to be having sex is, 'Oh, you have to divorce that person. You have to traumatize your children. That's the right thing to do.'

"I look at that situation and think, between divorce and cheating, when you're not really cheating your partner out of anything that your partner wants or values -- the partner doesn't want sex with you -- I think cheating is the least worst option."

"Yes, disastrously so," said Savage. "It is the ideal."

Why do you say disastrously so'? Isn't that what we should all want to go for?

"That's what we are all told we should want, and we all fall short -- not all of us. My problem with monogamy is, we're told that if we're in love, we won't want to sleep with anybody else. The truth is, if we're in love and we make a monogamous commitment, that means we will refrain from sleeping with other people. We still want to sleep with other people."

He describes his own long partnership and 10-year marriage to Terry Miller as "monogamish."

"There needed to be a word in-between monogamous and non-monogamous," Savage said. "And so 'monogamish' I thought kind of nailed it. It was closer to our reality, our lived experience. We were much more monogamous than not; we were mostly monogamous. We were monogamish."


Moriarty asked, "Does your son read your column?"

To which Miller added, "I mean, would you read your dad's sex advice column?"

Maybe times haven't really changed that much at all. Like Ann Landers, Dan Savage just wants to mend broken hearts.

"You sound like you really enjoy this, Dan," said Moriarty.