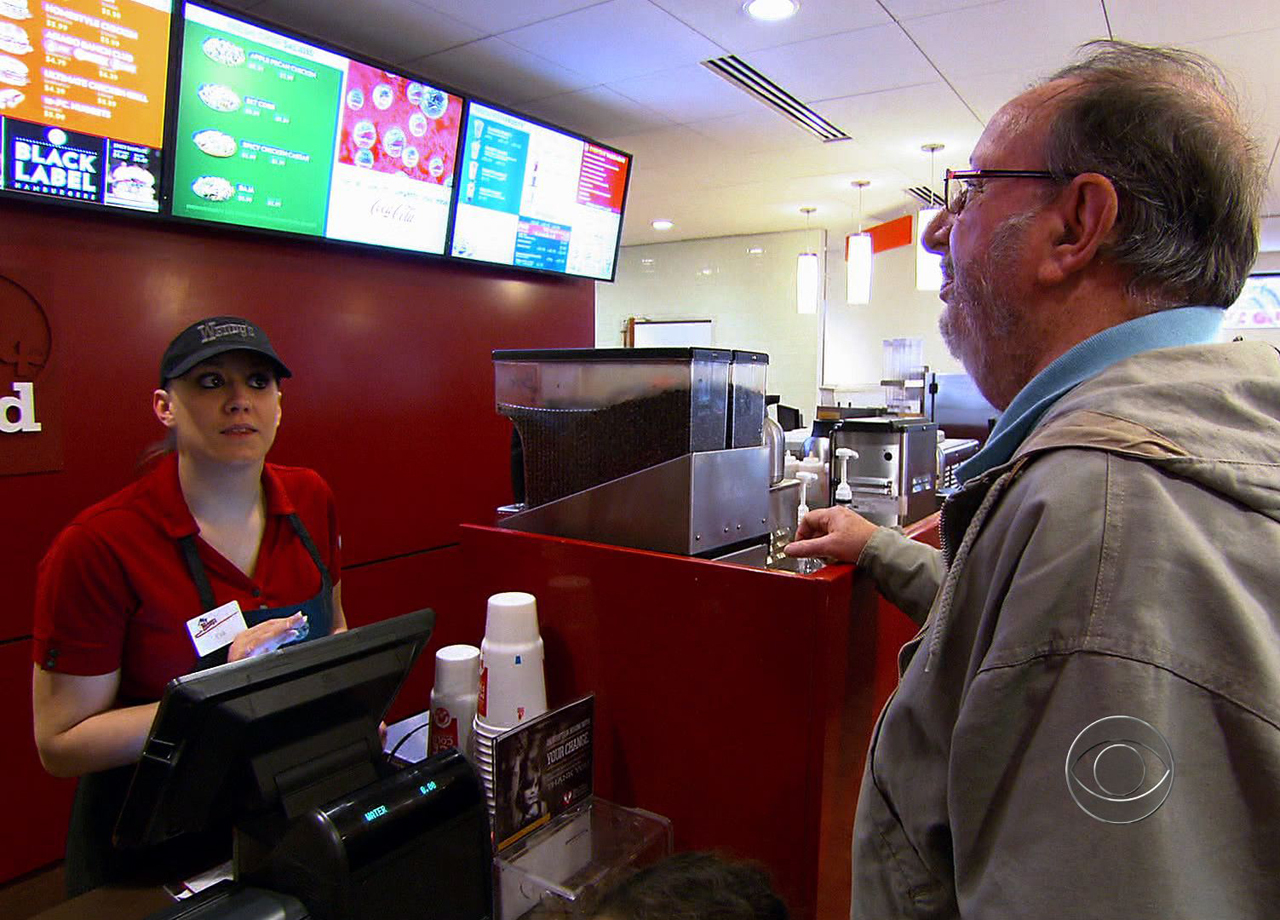 The expression THIS IS A TEST has very real meaning in one Midwest city, and implications for the rest of us. Tracy Smith serves up our story:

In the high security test kitchen at Wendy's International, they're working on what they hope will be the next big thing: the Black Label Burger. But don't start drooling just yet. Before it goes to your town, it first has to make the grade here: Columbus, Ohio.

If this were an actual product test, there'd be no cameras allowed, but Wendy's agreed to show us the process. White-coated food technicians do the cooking, and send the samples to volunteer tasters who grade it on things like onion flavor and messiness. Mmmm!

It's the last step before it goes out to the test market, and Senior VP Lori Estrada has high hopes: "We're still waiting on our consumer scores, but I'm anticipating based on what we know going into this that they're going to be great," she told Smith.

The test burger then goes to a real Wendy's. Even when it's on the menu here, spokesman Denny Lynch says they're still fine-tuning: "No question. We're fine-tuning all the way to the time we say, 'We're ready to pull the trigger and it's going to go national."

It looked like the test audience was already biting.

When asked what he thought about being a "guinea pig" in their test market, Bruce said, "I'm happy to be a guinea pig. I liked it."

And the so-called "guinea pigs" come in all demographics here. With Ohio State and dozens of other colleges, the student population here is massive, and there's a strong international presence. It all adds up to a near-perfect cross-section of the country's consumers.

It's Middle America - but that doesn't mean it's average. "I often say if you raked America together, you'd find Columbus," said Alex Fischer of the Columbus Partnership.

"You have this interesting blend of a funky culture - creativity, diversity - and a corporate culture that really mix it up," Fischer said. "And I think that's really what makes us a unique test bed, as opposed to being average."

Like Jeni's Ice Cream,for example. Their cayenne pepper flavor is just one of the flavors tried out here. It's a big seller.

In this case, the whole restaurant was a test. At Piada, they'll stuff a grilled flatbread with all the Italian delicacies as it can hold.

Chris Doody opened the very first Piada less than two years ago. Now there are six.

"Are these people with discerning palates, would you say?" Smith asked.

"Are you guys making money?"

"Yup, yup, so far, so good," said Doody. "It's no fun if you don't make money in the restaurant business."

And when we were there, the line never seemed to end. Expansion plans are in the works.

And then there's the Giant Eagle Market District, which could be the mother of all grocery stores. You can find cactus in the endless produce section. The butcher shop has every kind of meat, including rattlesnake and python.

"Consumers can come in here, with the same shopping trip that they pick up rattlesnake they can pick up their Cheerios," said Giant Eagle senior vice president Brett Merrell. "You have been longing for that for years, correct?" he laughed.

"Are there people who come here and are just overwhelmed?" asked Smith.

"There are - but they love to be overwhelmed," he said.

Merrell says the Pittsburgh-based company uses this location as a lab for things like nutrition labeling and frequent shopper perks.

And there another little idea they're testing in Columbus: They'll sell you wine in an actual glass, so you can drink while you shop. Of all the concepts they're trying out at this store, they tell us this is among the more popular.

"We love the Columbus market, the Columbus people, and we think this is a really good testing ground about what success will be, and so far it's worked very well," Merrell said.

"There are those who might look at this and say, 'Does the world really need 15 different types of malt balls?'" Smith said.

"No, a person may only need one type. But you know, the exciting part is, people can choose what they want," Merrell said.

And what they choose in Columbus today - may very well determine what YOU will buy tomorrow.

Smith asked Bruce, the "guinea pig," if he feels he has superior taste to the rest of the nation, and is that why they call on him.

"I don't know about the rest of the nation, but I have superior taste," he said.

And his wife concurred, for after all, "He chose me!"

The year in review: Top news stories of 2020 month-by-month
Thanks for reading CBS NEWS.
Create your free account or log in
for more features.
View CBS News In
CBS News App Open
Chrome Safari Continue
Be the first to know
Get browser notifications for breaking news, live events, and exclusive reporting.