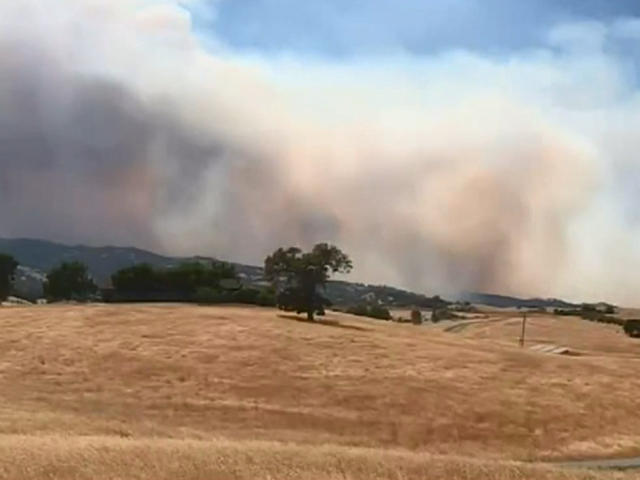 GUINDA, Calif. -- Evacuations were ordered as dry, hot winds fueled a wildfire burning out of control Sunday in rural Northern California, sending a stream of smoke some 75 miles south into the San Francisco Bay Area.

The fast-moving blaze that broke out Saturday in western Yolo County charred at least 50 square miles of dry brush and threatened more than 100 structures in ranchland northwest of Sacramento. No injuries were reported and the exact number of people evacuated was unclear. The California Department of Forestry and Fire Protection said Sunday night that there was 2 percent containment.

"When we put those evacuation warnings into effect, those orders into effect,  people need to heed those. Fires are moving faster than they have in the past," Cal-Fire Division Chief Chris Anthony said. "So we need to get people out of the fire's path so we can get in and do our jobs."

Autumn Edens marveled as a huge plume blocked the sun while she drove to her job as manager of the Corner Store in Guinda, a town of about 250 people just north of the fire.

"You can see the smoke and you can see an orange-red glow from the flames. It looks like a movie," she said. "I've never seen a fire like that up close and it's an intense feeling."

It was one of two major wildfires in the northern part of the state, where temperatures were soaring, humidity was dropping and winds were steady.

A blaze burning for several days to the west, in Lake County, jumped containment lines Saturday, prompting additional evacuation orders. That fire was more than 70 percent contained after charring about 22 square miles of brush and destroying at least 20 structures.

Smoke from the Yolo County fire was contributing to poor air quality in Napa, Sonoma, San Mateo and San Francisco counties, according to the National Weather Service.

The haze settling on areas to the south and west and rattled nerves near wine country communities that were devastated by deadly wildfires late last year.

A dusting of ash fell as far away as San Francisco, where tourists snapped pictures of the Golden Gate Bridge enveloped in an orange shroud of fog and smoke.

Across the bridge in Marin County, some customers coughed as they stopped for gas at the Shell station in Sausalito, employee Sergio Garcia said.

Officials urged people not to call 911 about smoke unless they see actively burning fire.

In southern Colorado, crews struggled to rein in a wildfire that was spreading in several different directions Sunday.

More firefighters were arriving to battle the blaze that has prompted the evacuation of more than 2,000 homes.

"It's a very challenging fire, I'll be honest with you, with all the wind changes," Shane Greer, an incident commander with the Rocky Mountain Incident Management Team, told residents Sunday.

Authorities said the fire east of Fort Garland was estimated at 83 square miles after unpredictable winds pushed the fire both north and south over the weekend, reports CBS Colorado Springs affiliate KKTV.

The fire is burning in Costilla and Huerfano counties, and the region has been declared a disaster area by Gov. John Hickenlooper, the station says. It was five percent contained as of Sunday night.

"Usually with a fire, we can chase it. ... We haven't been able to chase this because it keeps going in at least three different directions," Greer said.

Authorities said they began assessing some areas this weekend to track destroyed or damaged structures. But they cautioned that conditions remain dangerous and said they want to be sure information is correct before notifying property owners.

The Costilla County Sheriff's Office on Saturday said a man was being held on suspicion of arson in connection with the fire. It wasn't clear if Jesper Joergensen, 52, has an attorney.

Emergency management officials reported nine other fires remained active around the state on Sunday. Officials near Durango hoped that a cold front would slow down one of those. The fire began a month ago and is estimated at 77 square miles.

The Durango Herald reported that authorities planned to relocate some crews and equipment to help firefighters guarding communities as the flames moved north.