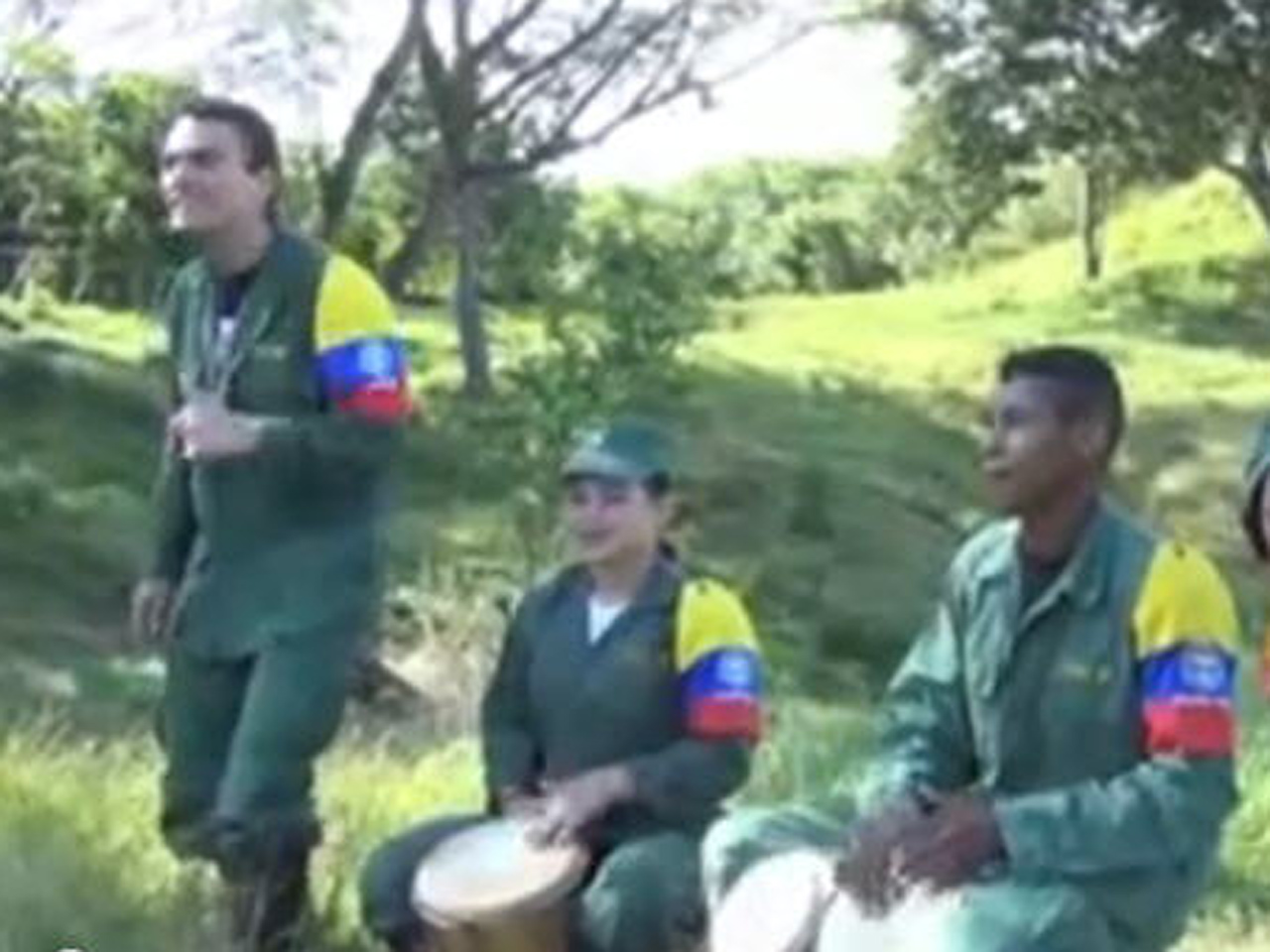 (CBS News) The Colombian guerrilla group FARC had never released such a bizarre video. At least one person close to the group said they are still in awe. The oldest guerrilla group in the continent -- increasingly isolated after a U.S.-backed, 12-year military offensive -- often communicates with the outside world through statements or videotaped messages. But on Tuesday, four rebel fighters appeared laying out the movement's latest intentions in a homemade rap video.

FARC, which stands for Revolutionary Armed Forces of Colombia, is ready "to come to the negotiating table without grudges or arrogance", says the group leader Rodrigo Londono, known as "Timochenko," at the start of the clip uploaded to YouTube. Four young rebels play a guitar and drums and sing rhymes about travelling to Cuba for the start of peace negotiations with the Colombian Government. The unarmed fighters wearing Che Guevara t-shirts and camouflage uniforms change to civilian outfits towards the end of the video before heading back to the jungle. The song mocks President Santos, who is referred to as a "conceited chucky-doll." (The name Chucky refers to the character of the Hollywood horror film "Child's Play".) They claim he had to ask Cuba's Fidel Castro for help in order to reach an agreement with the rebels.

President Santos officially confirmed Tuesday that an agreement had been reached with the insurgents. He spoke on national television about a road map for peace, but did not mention the rap video. It is widely believed the politician who led military operations against the FARC guerrillas -- first as Defense Minister and later president -- now wants to go down in history as the author of a peace agreement that will bring an end to Colombia's bloody, five-decade war.

In recent years the Colombian army dealt huge blows to the drug trafficking guerrilla movement, after nearly $5 billion of U.S. military aid and training that started under the Clinton administration. Top commanders were killed and several hostages rescued. Official statistics say the size of the rebel army was reduced from as many as 20,000 fighters to nearly 5,000.

Santos' plan foresees talks between rebel commanders and government emissaries that will take place in Norway and Cuba, while the army continues military operations against FARC at home. The president asked Colombians for strength and patience and said: "It's time to turn the page".

Many agree. The latest poll suggests 60 percent of the population welcomes efforts to end the conflict through dialogue. But there is also widespread skepticism. The last time a president tried to sit down with FARC's leadership for talks, he was stood up by the guerrilla leader, and an empty chair at the table became the poster image of the peace negotiations.

A source tells CBS News it took at least two years of secret talks to get to this "road map" stage. The lack of details about the process has prompted many to read between the lines of the rap video for an insight on what both sides are expecting. Analysts believe the notorious guerrillas -- which have tortured hostages, planted land mines and recruited children -- wants to clean up its international image. They say the video replaces a Marxist discourse with "modern" music, to communicate a simple message: Fighters are willing to depose weapons and are ready to be reincorporated to society, if the agreement succeeds.

It may be a hard sell for a country that got used to FARC's so called "proof of life" videos where soldiers and other hostages appeared chained in undisclosed jungle locations, sending messages to their relatives, and begging for a peace deal that would secure their release and bring an end to long years of captivity.