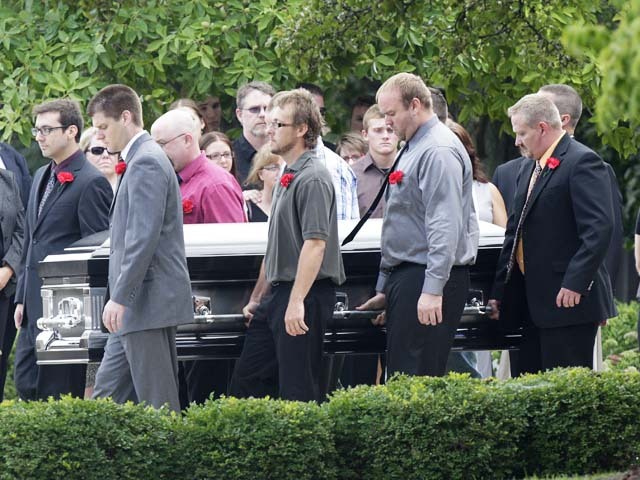 (AP) SPRINGFIELD, Ohio - A man who saved his girlfriend's life at the Colorado movie shooting was remembered for his selfless sacrifice Saturday, while an aspiring sportscaster was praised for her boundless energy and an Air Force reservist as a good friend.

The girlfriend who Matt McQuinn saved by taking three bullets aimed at her wept as pastors spoke of the senselessness of the shooting spree at the suburban Denver theater where 12 people were killed just more than a week ago.

Mourners packed a church in this western Ohio town where McQuinn came from, while family and friends gathered in San Antonio on the same day to remember Jessica Ghawi and a private funeral service was held at Buckley Air Force Base in Aurora, Colo., for Staff Sgt. Jesse Childress.

More funerals are set for next week.

When gunfire broke out in the Aurora theater, McQuinn, 27, dove in front of his girlfriend, Samantha Yowler, and was shot three times.

Yowler, who was shot in the knee and survived, arrived at McQuinn's funeral on crutches Saturday and wept quietly with his parents and other family during the funeral. Neither she nor his parents addressed mourners at the Maiden Lane Church of God.

Pastor Herb Shaffer, who is also McQuinn's uncle, said his nephew had been a gift to his family since he was born, and that his actions in Colorado were just one example of his selflessness.

McQuinn called his mother three times the day before she had surgery because he was upset that he couldn't be there in person, Shaffer said. When he was just 7, he put his arm around his younger cousin because he was worried she wasn't having a good day, he said.

Then he talked about McQuinn's greatest sacrifice of all, saving Yowler, whom Shaffer described as the love of his nephew's life.

"In moments of crisis, true character comes out," he said. "His immediate response was to protect the woman he loved."

"Matt's death is a sudden loss, one that has produced many questions in your minds," Pastor Dan Fiorini said. "I know you're asking in your heart of hearts, why? Why was Matt there? Why was a gunman allowed to enter that theater? Why was he able to purchase guns and ammunition so easily? Why didn't God do something?"

Fiorini said he couldn't answer any of those questions.

"We can wrestle with the whys of this tragedy for eternity and never come up with an answer," he said.

Shaffer told mourners that the shooting forever changed them.

"Our lives will never be the same," he said. "The words Aurora, Cinema 16 shooting, Batman, will never mean the same thing, and we'll be reminded of Matt every time we hear them."

Mourners at Ghawi's funeral also touched briefly on the massacre.

"If this coward could have done this with this much hate, imagine what we can do with this much love," her brother said at the Community Bible Church in San Antonio.

But most of the service focused on the life and energy of the aspiring 24-year-old sports journalist.

"What we will not do today is focus on how she left us," said Peter Burns, a friend from Colorado, reading a statement from Ghawi's mother, Sandy. "Jess was a force to be reckoned with. She was a jolt of lightning. A whirlwind. A Labrador puppy running clumsily with innocent joy."

Burns talked of the funny way Ghawi sneezed, her near-addiction to Nutella chocolate, how she was sloppy and always lovable.

Ghawi's boyfriend, Jay Meloff, note that others described her as "a tough, redheaded spitfire," and she was, but that he also saw "a beautiful, warm-hearted and passionate woman with a capacity for love. ... She was as mushy as they come."

He said they were looking forward to building a future together and he also encouraged others to do as she did and "live each day fully."

Ghawi was a pretty, blue-eyed redhead who moved to Colorado about a year ago. She had survived a June 2 shooting at a Toronto mall that left two dead and several wounded. She blogged about the experience, writing that it reminded her "how fragile life was."

"I was reminded that we don't know when or where our time on Earth will end. When or where we will breathe our last breath," Ghawi wrote.

Friends and colleagues have described the Air Force cyber-systems operator as a good friend, experienced and knowledgeable. Childress was from Thornton, Colo., and worked at Buckley Air Force Base.

James Holmes, a 24-year-old former doctoral student studying neuroscience, is accused of opening fire on the theater, killing McQuinn, Ghawi, Childress and nine others, and wounding 58. He is due to be formally charged Monday in Colorado.