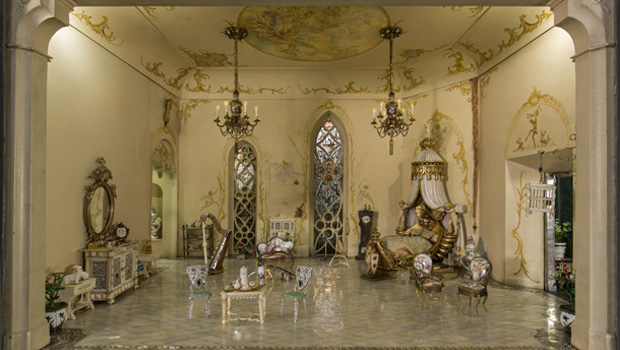 One star of the silent movie era left us more than her films to remember her by. Rita Braver shows us a small wonder:

It is the ultimate enchanted castle: lush gardens, sumptuous rooms, decorated with precious furniture and priceless art. There are glowing chandeliers, and elegant bathrooms.

Not bad, for a doll house!


It's nine feet square, and stands 14 feet all.

"It's got 11 rooms, and each room is filled with murals, paintings on the walls and the ceilings of fantasy stories from childhood," said Kathleen McCarthy, chief curator of Chicago's Museum of Science and Industry, "so it's all sorts of creative stories to incite one's imagination."

The Chicago museum has been home to the castle since 1949, when it was donated by the woman who conceived of it, designed it, and poured her heart into it: Colleen Moore, one of Hollywood's most successful silent film stars.

"She played an exuberant, youthful, independent but scandalous flapper," said McCarthy. "At a time when most women wore their hair long, she cut it short. She wore short skirts, and this made her both an icon and one of the highest-paid actresses in Hollywood."

So she could well afford to pursue her childhood passion -- building doll houses. She spent a reported half-million dollars on the Fairy Castle, from 1928 to 1935. Moore employed some 100 Hollywood designers and craftsmen to build it.

By then she was an established movie star. She made more than 50 films in all, even a few talkies.

Hargrave spent many fun afternoons with her grandmother, visiting the Fairy Castle, a dollhouse which never actually housed any dolls. According to Alice, it housed fairies which Moore would see. "I remember constantly her saying, 'Oh, Alice, look, there went one!' And I turned and I had always just missed them! I just couldn't understand that.

"And then the whole idea of the floating staircase in the hall was that there are no banisters because fairies have wings, they don't need banisters."

But see them or not, fairies can be hard on their surroundings. The Castle was designed to last, but like any older home, this one has deteriorated over the years.

"We had a little bit of corrosion," she told Braver. "You can still see the staining. And the water came in this direction and it affected the floor."

"It must be a fun project to work on," said Braver.

"It is. I mean, I'm getting to play with a doll house and I get paid for it!"

And just like a full-sized house, restoring this one has cost a pretty penny -- around $200,000. The castle's running water and glowing lights, for example, have been replaced with a modern fiber optics system.

But the restoration did provide a bonus. For the first time in decades, museum visitors got a chance to see some of the Castle's treasures up-close.

Items like a bear skin rug. "Course, it was really difficult to find a miniature bear," said McCarthy. "So this was created by a taxidermist from a fur that Colleen Moore brought to him. And the teeth in the mouth of the bear came from a mouse."

"Colleen Moore was able to get notable authors like F. Scott Fitzgerald, John Steinbeck. Edgar Rice Burroughs, who wrote 'Tarzan,' did 'Tarzan Jr.' for her."

Walt Disney had his studio make a tiny portrait of Mickey and Minnie Mouse. Writer and Ambassador Clare Boothe Luce presented what was said to be a tiny piece of the true cross on which Jesus Christ was crucified.

The Fairy Prince and Princess (who, by the way, have separate bedrooms) sleep in real style, with toiletries to match -- scissors that actually cut, a razor that is sharp, and a mirror for him to use while he's grooming.

And the princess' toiletry set? Made out of gold with diamonds, created by a jeweler in Boston. To make the hairbrush, he trimmed the edges of his wife's fox collar to get the tiny bristles for the brush.

Colleen Moore took her Castle on tour across the country to raise money for children's charities. Along the way, she met Chicago stockbroker Homer Hargrave. They wed in 1937, and she left the world of Hollywood behind.

"She seems like such a remarkable woman," said Braver.

"That she was," said Alice Hargrave. "And I think it's interesting how her whole persona have taken shape in this amazing Castle that incorporates so many aspects of her life and her lives. It contains family. It contains Hollywood. It contains culture from around the world, history, literature."

And now, with its sparkle renewed, the Castle will bring joy to countless generations.