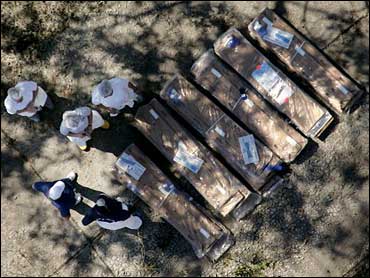 With the waters receding, New Orleans faces a ghastly task of epic dimensions not seen by an American city in perhaps a century: collecting, identifying and then burying potentially thousands of corpses, many of them bloated, decayed or no doubt mangled beyond recognition.

Already, officials said they have 25,000 body bags on hand in Louisiana, and a temporary warehouse morgue is being readied to handle 5,000 dead.

Meanwhile, conditions in New Orleans may be getting bad enough to force even the staunchest holdouts to leave their homes. Michael Keegan of U.S. Immigrations and Customs Enforcement says, "Some are finally saying, 'I've had enough.' They're getting dehydrated. They are running out of food.''

There are increasing concerns about the risks posed by the floodwaters. Tests confirm they contain sewage-related bacteria in amounts at least ten times higher than acceptable limits.

CBS News Correspondent Byron Pitts reports that doctors say the city is ripe for an outbreak.

"There are a lot of mosquitoes who are feeding off these decomposed bodies and so we're worried about increased incidence of West Nile," said Dr. James Moises.

Searchers including soldiers armed with M-16's are continuing to make their way through New Orleans neighborhoods -- trying to persuade the last stubborn residents to leave as well as finding corpses.

There are many challenges in the collection of bodies, reports CBS News Correspondent Mark Strassmann: Identifying the dead, processing the bodies and notifying survivors. Katrina was such a killer that St. Gabriel's temporary morgue could be open indefinitely.

In the confusing tangle of federal, state and local workers here, a preliminary plan has emerged to deal with the bodies.

"The mayor is very strong on the fact that you handle the remains with dignity and respect, especially considering the celebration of life that we have in New Orleans," said Sally Forman, a spokeswoman for Mayor C. Ray Nagin.

The president's plan comes as a new revealed that an overwhelming number of Americans say the government response was too slow. The blame is shared by all levels of government.

Officials readied for the potential of a horrendous death toll. Bob Johannessen, spokesman for the state Department of Health and Hospitals, confirmed officials have 25,000 body bags on hand in Louisiana. Asked if authorities expected that many bodies, he said: "We don't know what to expect."

At two collection sites — one at the corner of Interstates 10 and 610 and one in neighboring St. Bernard Parish — federal mortuary teams collect any information that may help identify a body, including the coordinates of where each corpse was found.

They have also collected whatever personal effects were on the bodies, in hopes that something — say, a hairbrush — might be used later to identify the victims.

At the temporary morgue set up in nearby St. Gabriel, the bodies are photographed, and forensic workers hope to use dental X-rays, fingerprints and DNA to identify them.

Identifying the dead will be complicated by the intense New Orleans heat some corpses have been exposed to. Also, being submerged in water can damage fingerprints quickly, said Amy Mundroff, a forensic anthropologist who worked on identifying victims after the Sept. 11 attacks (more than 2,700 dead at the World Trade Center alone) and the crash of TWA Flight 800 off Long Island in 1996.

Dental X-rays could prove helpful, but those rely on a match with a person's dental records. And such records could be difficult to track down — if they are available at all — for many of the destitute residents here. It is also possible that Katrina destroyed some dentists' records along with their offices.

DNA in bones is long-lasting. But few victims are likely to be found with personal effects — hairbrushes, toothbrushes and the like — that could yield DNA samples for comparison, Mundorff said.

A DNA match can also be done with a sample from a victim's kin. But the relatives of Katrina's victims are scattered across the country now, with no notion of when they can return.

"The families are so dispersed," Mundorff said. "It'll be months and years until everybody is identified, I'd assume."

A week and a half after the storm's fury, there are only hints at what the final number might be. In Mississippi, the death toll stands at around 200 and counting. In New Orleans, the mayor at first speculated thousands, then suggested 10,000.

That could make Katrina the worst natural disaster in the United States in a century or more. In 1900, some 6,000 to 12,000 people were killed by a hurricane that hit Galveston, Texas. The death toll in the 1906 San Francisco earthquake and fire has been put at anywhere from about 500 to 6,000.

Over the next few weeks, the Army Corps of Engineers, which is overseeing the prodigious task of pumping the floodwaters out of New Orleans, is concerned bodies may clog the pumps or otherwise become trapped in the machinery.

John Rickey of the Corps said Thursday he knew of no such incidents so far. But he added: "It's got a huge focus of our attention right now. Those remains are people's loved ones."