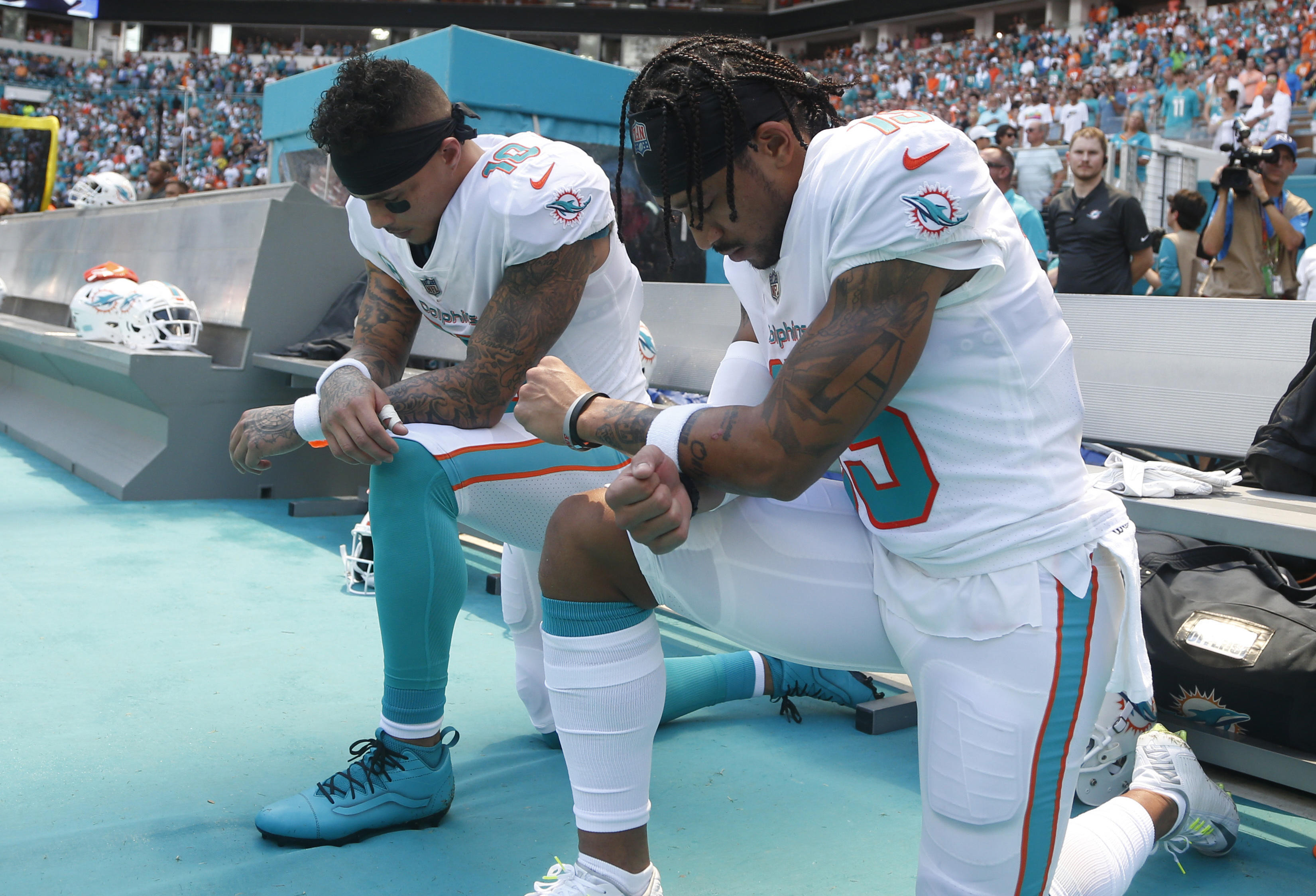 DENVER -- Miami Dolphins teammates Kenny Stills and Albert Wilson were the only two players to kneel during the national anthem on the NFL's opening Sunday, and Colin Kaepernick, who may no longer be welcome on an NFL sideline, offered his thanks to the players on Twitter.

"My Brothers (Stills) and (Wilson) continue to show their unwavering strength by fighting for the oppressed," Kaepernick tweeted. "They have not backed down, even when attacked and intimidated... Love is at the root of our resistance."

It was Kaepernick, then with the San Francisco 49ers, who sparked the anthem controversy by kneeling during the pregame ritual in 2016 — his way of protesting policy brutality and social injustice in America.

Since opting out of his contract after that season, Kaepernick has been unable to land a contract on an NFL team and is suing the league for collusion.

But his voice is still being heard. Last week, Nike introduced an ad featuring the quarterback and his message: "Believe in something, even if it means sacrificing everything." One fan in Cleveland for the Steelers-Browns games was spotted in the stands wearing a Kaepernick jersey.

While Stills and Wilson were kneeling during the anthem, teammate Robert Quinn raised his fist.

On most weeks last year, the Seahawks had the most players taking action during the anthem. Though that number had fallen to 2 to start 2018, Brown wasn't worried.

"I made my decision. That was my decision," he said. "I wasn't paying attention to see what other teams or other players are doing."

The NFL briefly had a policy in place in May regarding the anthem, but quickly rescinded it so the league and players union could negotiate. Brown said he hasn't heard any word from the union dissuading player protests during the anthem.

Also coming as no surprise was the tweet from President Trump, sent several hours before Kaepernick's, that took digs at the NFL, linking low ratings for Thursday night's opener between Atlanta and Philadelphia (lowest for an opener since 2008) to players who refuse to stand for the anthem.

"If the players stood proudly for our Flag and Anthem, and it is all shown on broadcast, maybe ratings could come back? Otherwise worse!" he tweeted.

CBS and Fox, which carried Sunday afternoon's games, have said they did not plan on televising the anthem. However, NBC did show the anthem Thursday night, and no players kneeled or protested in other ways.

That included Malcolm Jenkins of the Eagles, who raised his fist during the anthem last season but did not for the opener. During pregame warmups, he wore a shirt that read "Ca$h bail (equals) poverty trap."

Jenkins, a founder of the Players Coalition which was formed to tackle issues similar to those Kaepernick is concerned about, said he would like to move the focus away from the anthem.

"I think there's a huge need for us to turn the attention to not only the issues, but what players are actually doing in their communities to promote change," he said. "We're trying to move past the rhetoric of what's right or what's wrong in terms of the anthem, and really focus on the systematic issues that are plaguing our communities."