Colin Firth is making a big splash in the movie "A Single Man" . . . in fact, he's said to be a leading contender for an Oscar as best actor. Mark Phillips has a Sunday Profile:

Some careers have a single point when they take off. For Colin Firth, it came with a splash.

His portrayal of the reserved, brooding and oh-so-eligible English country gentleman in Jane Austin's "Pride and Prejudice" won awards on both sides of the Atlantic.

But it's a role that has haunted him, too . . . clung to him like a wet shirt. To many of his fans, he will always be Mr. Fitzwilliam Darcy . . . or even Mark Darcy, the steady (if slightly boring) reluctant suitor in "Bridget Jones' Diary" and its sequel . . . and a cabinet minister with a dog named Darcy, in the British-girls-get-naughty-at-school "St Trinian's" comedies . . . with a wet shirt again.

Colin Firth has learned not to fight Darcy, but to use him.

"You see Colin Firth on the billboard, for a while you expected I suppose dripping and britches and buttons," said Phillips.

"That's true," said Firth. "You get a brand attached to you whether you invite it or not. You want to make a living, so using a piece of success tends to bring other stuff in. But it's usually stuff that's related to the thing that brought you success."

Colin Firth has had nothing but success. For twenty-five years on stage, TV and the movies, he's done nothing but work.

Now he's rumored to be on the verge of one show biz's greatest prizes - an Oscar nomination.

Phillips met with Firth at the actor's wife's London eco-fashion shop - bamboo towels and bottle top bags anyone? ("What I like about this part of London is it's full of foreigners," Firth said.)

"Is it important to you to get the nomination?" Phillips asked. "If you were to win, would that be 'a good thing'?"

"It would be a wonderful thing," Firth laughed. "It would only be a good thing for me, it wouldn't help anybody else - might help the movie." 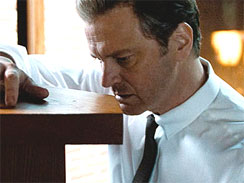 (Weinstein Company)
The movie is "A Single Man" - a day in the life of a gay English professor in Sixties Los Angeles whose longtime partner is killed in a car crash.

"A Single Man," by first-time director and fashion-designer Tom Ford (otherwise known as the man who saved Gucci), is as meticulous dramatically as it is stylistically, and has been a big hit on the festival circuit.

But he isn't the kind of guy to look too deeply into the mouth of awards (of which he's had a few) or to try to analyze his own success.

One of his theories is what he calls his "neutral" looks, a face onto which characters can be painted. "Goldilocks looks" - not too hot not too cold, a guy who's been called the thinking woman's heartthrob.

"But do you need 'matinee idol' looks?" Phillips asked.

"You don't, you don't. I won't get anxious about it, but I mean I was a long way from being the best looking boy, even in my math class, much less at drama school!"

Maybe. But Colin Firth - now pushing fifty and the father of three - has made a career of variations on the Englishman-of-a-certain-class thing.

For awhile it seemed his role in life was to lose glamorous women to other Englishmen . . . to Hugh Grant in the "Bridget Jones" movies . . . to both the Fiennes brothers (Joseph in "Shakespeare in Love," Ralph in "The English Patient").

If there seemed to be a pattern here, Firth insists it wasn't deliberate.

"No, for me any associational baggage that I carry is the enemy really, it's not something that I've wanted to push."

"Because it interferes, you feel, in getting across the character you are trying to portray?"

"Yes, although I've learned that baggage can be useful in the end, you can't actually fight it so you might as well make use of it. It occurred to me a few years ago when I was making a film called 'Where the Truth Lies.'"

It's a who-done-it in which Firth plays a kind of anti-Darcy straight man alongside Kevin Bacon. Firth is another well-mannered Englishman . . . up to a point, then he smashes a man's head against a counter.

"I wanted to play the Italian American. He said, 'No, stick with the English thing.'"

Or variations on the English thing, none stranger than the rollicking romp, ABBA-fest that was "Mamma Mia," in which Firth joins Meryl Streep, Pierce Brosnan and others in bravely going where none of them had gone before.

"It has to feel like a hen night or karaoke night or something," Firth said with a laugh. "That's probably why they picked a bunch of actors who can't sing or dance! That's what I like to think - it was inclusive."

"Playing against type, I suppose, in that sense," said Phillips.

"Yes, in a way. They're certainly debonair or elegant and I didn't think there was anything particularly repressed or restrained about this character, except that you certainly have to see him un-button to break loose." 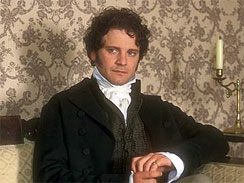 (BBC)
Buttons have mattered to Colin Firth. He's very much buttoned-up in "A Single Man," and there were plenty of buttons in "Pride and Prejudice" (left).

"I don't, between jobs, I don't even really know how to dress, because nobody's written it, nobody's dressed me, no one's given me a persona," Firth said. "I go back to a rather rough edged and I daresay sort of nebulous character. I think my family would know me!"

And so will everybody else, if the Oscar thing happens.

"Every time there is a nomination or something nice is said, people feel happy, if there's a disappointment it's amazing how silent it all goes!" Firth said, smiling.