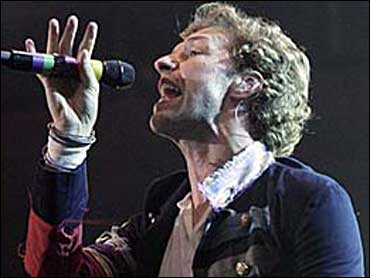 Coldplay are officially the biggest band in the world.

The star-studded ceremony, which salutes the most popular international music-makers, is based on record sales.

Beyonce kicked off the event, performing a medley of her songs "If I Were A Boy" and "Single Ladies." She also collected the Outstanding Contribution to the Arts title.

Mariah Carey, fresh from her performance on the UK talent show "The X Factor," picked up the Special Achievement Award.

And just days after Paul McCartney was honored with the Ultimate Legend award at the MTV Europe Video Music Awards in Liverpool, his Fab Four band-mate Ringo Star picked up a trophy in Monaco. Starr was presented with the Diamond Award on behalf of The Beatles. The honor was for selling more recordings than any other band in the history of the music industry.

Hosted by Jesse Metcalfe and former Destiny's Child singer Michelle Williams - a broadcast of the ceremony is set to air in 160 countries around the world.

The World Music Awards have been running since 1989, it's a charity event which benefits the Monaco Aide & Presence Foundation.