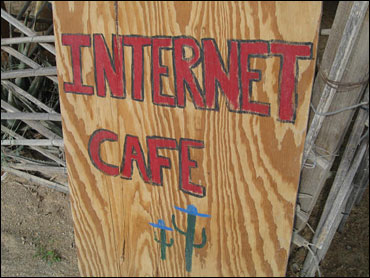 A poll conducted in June by the Associated Press found that 20% of people brought a laptop computer with them on their most recent vacation and that 80% brought a cell phone. Had I been part of that survey, I, too, would have confessed that I had both a laptop and a cell phone not just on my most recent trip but on every trip I've taken during the past 20 years.

Sometimes, for backup, I carry two laptops and both a cell phone and a SmartPhone. The technology has allowed me to be productive on nearly every continent. I've received phone calls on gondolas, filed stories from tents, done live radio interviews from fishing boats.

I once carried a handheld satellite phone with me to Peru and got a call while visiting a thatched hut on an island in the middle of the Amazon River. Locals stared in disbelief. Not only had they never seen a satellite or cell phone - many of them had never seen any type of telephone.

But if that AP pollster approached me today, I'd say no way because I just got back from eight days in Mexico where I was completely off-the-grid. I had no laptop and my cell phone didn't work. For the first time ever, I filed my columns and recorded my daily KCBS radio segments in advance and told CBS News in New York that if technology news breaks, someone else has to fix it.

This was no accident. It was a family vacation with my wife and two college-age kids. My son Will, a 21-year-old UCLA student, went out of his way to find a small isolated beach community with no cell phone access and insisted that I leave my laptop behind.

Cabo Pulmo, which is located about two hours north of Cabo San Lucas on the Sea of Cortez in Baja California has about 80 year round residents, maybe a few dozen bungalows and no wires leading into town. Electricity is solar with a generator as backup.

There is no cell phone access and the only way reason residents can make phone calls is because of a radio relay and satellite systems that bring landline service to town. There is an "Internet café" inside an old Airstream trailer in a dusty lot. The lone Dell laptop is powered by a solar panel and gets its Internet signal via satellite. My kids used it a couple of times but I was forbidden to touch it.

As I waited for my flight at the San Jose, California airport I kept thinking I was missing something. What I was missing was the bag I usually sling over my shoulder with a laptop, charger, extension cord, batteries and other technological paraphernalia. Getting through security was that much easier because I didn't even have a laptop to take out of the bag.

I did have an iPhone with me which I used as I waited for the first flight in San Jose and between flights in Los Angeles. I used the time between flights at LAX to make some last minute phone calls, send out a few final emails and check my stock portfolio.

When the plane landed in Cabo San Lucas, I tried dialing a number from the iPhone but got a message in Spanish telling me - I think - that the phone works, but I needed an account with a local provider. By the time we got halfway to Cabo Pulmo, that iPhone and the other cell phones in our possession were expensive paperweights.

The first couple of days in Cabo Pulmo were difficult. I kept feeling like there was something I had to do even though I had no deadlines. There were times when I would reach into my pocket for a phone only to wind up with a handful of sand from the last time I took a dip in the water.

We were playing Scrabble one night and I was dying to go online to look up a word. Instead, we had to rely on a Spanish/English dictionary my daughter had. When I was cooking dinner in our bungalow, I wanted to go online for a recipe for burritos but had to improvise. They came out fine.

There were numerous times during the first few days when I wished I could go online to check out a fact, plot a side trip via an online map or call someone with a question, but none of that was possible. I rediscovered that it's possible to get directions by asking people, and find a destination by looking at a paper map.

By about the fourth day, I came to the realization that it's a lot easier to relax when you're not bombarded with media, information and emails and phone calls. I felt a bit lighter walking around without a phone and my shoulders didn't ache from the weight of a laptop case. And by the day six, I was bemoaning the fact that the vacation was almost over and I would soon have to return to email, phone calls and all the other "benefits" of civilization.

When I finally landed back in San Jose and reached for my iPhone, I discovered it no longer worked. I later found out that AT&T disconnected it during the trip because the evaluation period for my loaner phone had expired. It was time to return the phone to Apple. I packed it up, sent it back and I don't miss it. But that's not because I learned a valuable lesson in Mexico. It's because I'm about to get a Blackberry.

A syndicated technology columnist for over two decades, Larry Magid serves as on air Technology Analyst for CBS Radio News. His technology reports can be heard several times a week on the CBS Radio Network. Magid is the author of several books including "The Little PC Book."
View CBS News In
CBS News App Open
Chrome Safari Continue
Be the first to know
Get browser notifications for breaking news, live events, and exclusive reporting.