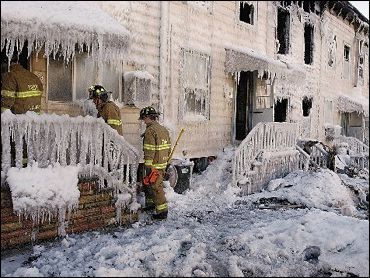 The bitter cold that gripped the northeastern United States through the weekend and iced over roads was blamed for at least three deaths, and another severe cold snap is on the way for people in the Northeast.

Meteorologist Michael Fitzsimmons in Caribou, Maine, said an arctic front will bring strong winds and below-normal temperatures beginning Tuesday night, and will be enough to send shivers through people from Boston to Washington D.C.

"We may be looking at a weather pattern over the next two weeks which is as cold as anything we've seen in the last 10, 15 and in the worst case, 25 years," said Accuweather meteorologist Joe Bastardi.

A Philadelphia man, whose identity had not been determined Sunday, died of hypothermia early Saturday after being found inside a home without heat, said Jeff Moran, a spokesman for the Philadelphia Health Department. Temperatures in the city had dropped to 4 degrees Fahrenheit that morning.

In western New York, an 18-year-old died after he lost control of his car on an icy road late Friday and struck a tree, state police said.

In Brockton, Massachusetts, a fire that engulfed an apartment building just at dawn Sunday killed a 63-year-old woman and injured three other people. State Fire Marshal Stephen D. Coan said an investigation is underway, but it appears that space heaters started the fire.

Two homeless men were found dead outside in Boston on Thursday and Friday, but police spokesman Michael McCarthy said Sunday that the causes of their deaths had not been officially determined.

Sub-zero temperatures across the region broke records, reports CBS News Correspondent Randall Pinkston — minus 27 in St. Johnsbury, Vermont; 16-below zero in Syracuse; 7-below in Scranton, and 3 below zero in Boston, two degrees colder than the previous record there for Jan. 10, set in 1875.

In New York City, officials received more than 2,000 heating-related complaints, hundreds of people sought refuge in homeless shelters, and about two dozen people were treated at emergency rooms for cold-related ailments as the mercury dropped to near zero Saturday.

The cold weather was also blamed, indirectly, for an increase in gasoline prices, in part because of the increased demand for home heating oil. Gasoline prices surged more than seven cents per gallon in the past three weeks, according to an industry analyst.