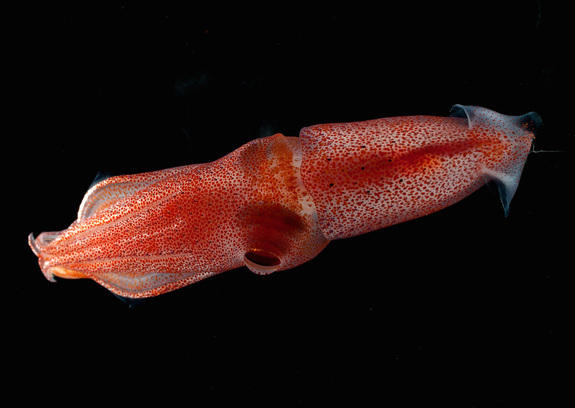 As its name implies, the cockeyed squid has some peculiar peepers: One is small and black, and the other is exceptionally large and yellow. Now, scientists think they know the reason for the squid’s wonky eyes: They help the squid spy on prey and predators in the ocean’s so-called twilight zone.

By observing the squid in underwater videos, the researchers found that the creature used its large eye to look upward and its small eye to gaze downward, helping it keep a constant lookout for potential meals and threats surrounding it, the researchers said.

“Eyes are really expensive to make and maintain,” lead study researcher Kate Thomas, a graduate student of biology at Duke University, said in a statement. “You want eyes just big enough to do what you need to do, but you don’t want to have any bigger eyes, because then you are just wasting resources.” [See Amazing Photos of Squid]

This squid species’ mismatched eyes have long puzzled scientists since its discovery about 100 years ago. Cockeyed squids (Histioteuthis heteropsis) are born with eyes that are the same size, but the left eye rapidly enlarges and becomes semi-tube-shaped during juvenile development, sometimes reaching twice the size of the right eye, the researchers said.

“You can’t look at one and not wonder what’s going on with them,” Thomas said.

To investigate, Thomas and her colleagues watched 152 underwater videos of cockeyed squid in Monterey Bay taken by remotely operated vehicles (ROVs) from the Monterey Bay Aquarium Research Institute (MBARI) over the past 30 years. The researchers noticed that H. heteropsis swam in a strange upside-down position, with its head down and its tail up.

They came to the “bioluminescent” conclusion because it would be almost impossible for the downward-pointing eye to see silhouettes with the sun’s dim light shining above, the researchers said.

Moreover, whereas expanding the size of the large, upward-pointing eye improves its ability to see in dim light, increasing the size of the downward-facing eye doesn’t affect its sensitivity to discern bioluminescent flashes against a dark backdrop, they said.

“The eye looking down really only can look for bioluminescence,” said the study’s senior author, Sönke Johnsen, a professor of biology at Duke University. “There is no way it is able to pick out shapes against the ambient light. And once it is looking for bioluminescence, it doesn’t really need to be particularly big, so it can actually shrivel up a little bit over generations. But the eye looking up actually does benefit from getting a bit bigger.”

This visual adaption likely helps H. heteropsis survive in the so-called twilight zone, a region from about 660 feet to 3,200 feet (200 to 1,000 meters) under the water’s surface, the researchers said.

Little sunlight reaches this area, making the twilight zone dim and a monochromatic blue color. Many animals have adapted to this crepuscular place by developing bioluminescence, or the ability to glow, the researchers said.

The results will be published online Monday, Feb. 13, in the journal Philosophical Transactions B.