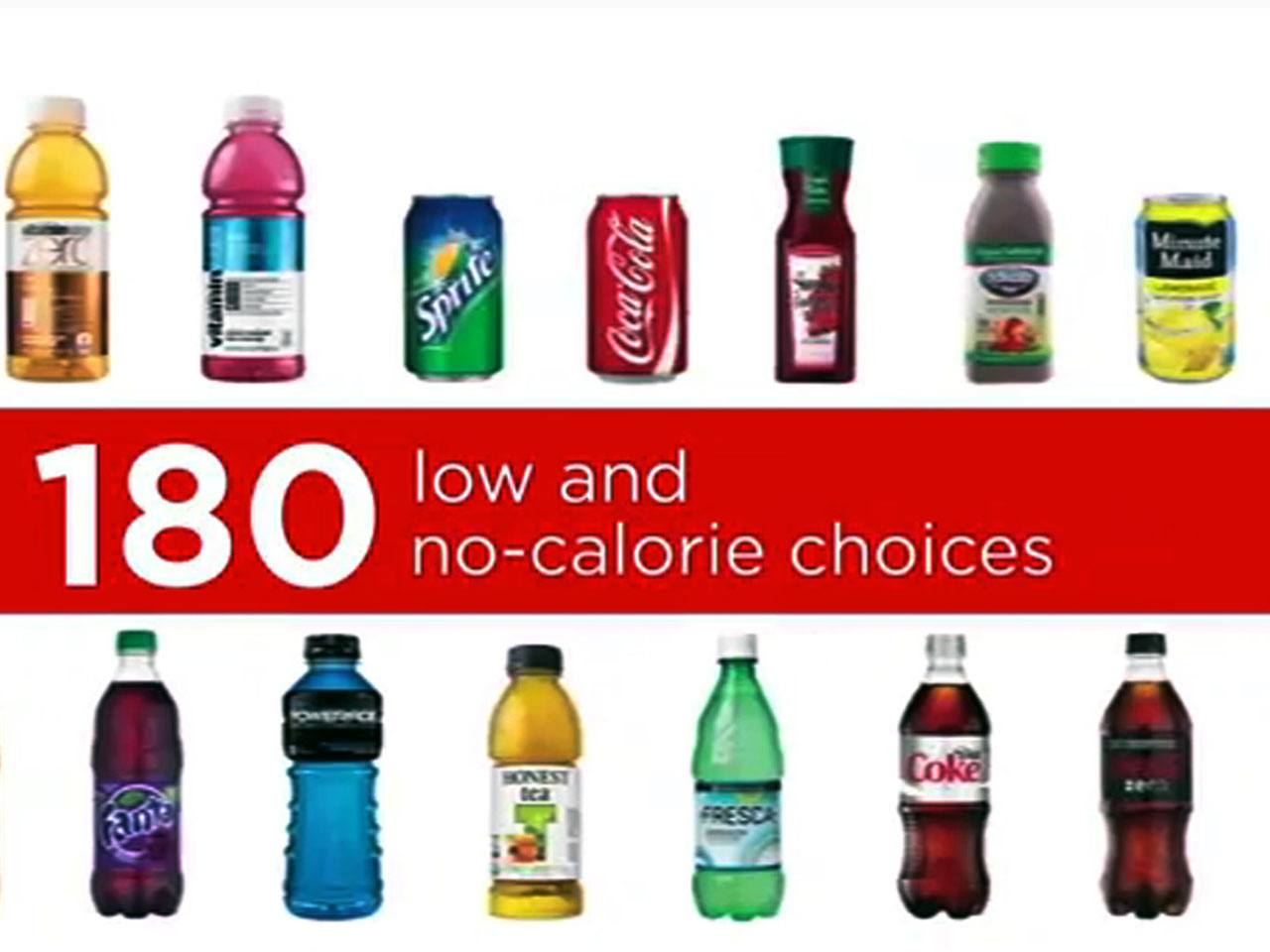 Coca-Cola plans to address obesity in new advertisements for its popular soft drinks.

In a company first, Coca-Cola will tackle the cloud growing over its industry: the link between sugary drink consumption and child and adult obesity rates.

The Atlanta-based company on Monday will begin airing a two-minute spot during the highest-rated shows on CNN, Fox News and MSNBC in hopes of becoming a stronger voice in the intensifying debate over sodas and their impact on public health. The ad lays out Coca-Cola's record of providing drinks with fewer calories over the years and notes that weight gain is the result of consuming too many calories of any kind -- not just soda.

The campaign will kick off a variety of moves that help address obesity in the year ahead, such as providing more diet options at soda fountains, Coca-Cola says.

More than one-third of U.S. adults are obese, so too are approximately 17 percent of children and adolescents between 2 and 19 years old according to federal estimates. That doesn't include the number of overweight Americans.

Previous studies have found links between obesity risk and sugary drink consumption, including research that found drinking sugary beveragesinteracts with genes that affect weight gain and a study that found swapping sugary drinksout of a child's home for water or diet drinks may lead to weight loss.

For Coca-Cola, the world's No. 1 beverage company, the new ads reflect this mounting pressures by health advocates on the broader beverage industry. In March 2013, New York City is set to put into effect a first-in-the-nation cap on the size of soft drinks sold at restaurants, movie theaters, sports arenas and other venues. The rule will require a maximum 16-ounce cap on drinks sold at these establishments that fall under the New York City Health Department's jurisdiction. The plan has been met by opposition from the soda industry, which filed suit in October.

The mayor of Cambridge, Mass., has already proposed a similar measure, saying she was inspired by New York's move.

Even when PepsiCo Inc., the No. 2 soda maker, recently signed a wide-ranging endorsement deal with pop singer Beyonce, critics called for the singer to drop the contract or donate the funds to groups that fund health initiatives.

Michael Jacobson, executive director for the watchdog, the Center for Science in the Public Interest, was skeptical about Coca-Cola's ads and said the company would stop fighting soda taxes if it was serious about helping reduce obesity.

"It looks like a page out of damage control 101," he said. "They're trying to disarm the public."

The group has been critical of the soft drink industry and last year released a video parodying Coke's famous polar bears becoming plagued with diabetes and other health problems.

Diana Garza Ciarlante, a spokeswoman for Coca-Cola Co., said the new ads aren't a reaction to any negative public sentiment but that the company felt it needed to address "the issue of the times" and be part of the discussion on obesity.

In the ad, a narrator notes that obesity is an issue that "concerns all of us" but that people can make a difference when they "come together." The spot was produced by Brighthouse and Citizen2 and is intended to reflect Coca-Cola's corporate responsibility among cable news viewers.

Another ad, which will run later this week during "American Idol" and before the Super Bowl, is much more reminiscent of catchy, upbeat advertising people have come to expect from Coca-Cola. It features a montage of activities that add up to burning off the "140 happy calories" in a can of Coke: walking a dog, dancing, sharing a laugh with friends and doing a victory dance after bowling a strike.

Garza Ciarlante said the 30-second ad, a version of which ran in Brazil last month, is intended to address confusion about the number of calories in soda. She said the company's consumer research showed people thought there were as many as 900 calories in a can of soda.

The company declined to say how much it was spending on the commercials, which it started putting together last summer. It also declined to give details on its plans for the year ahead. But among the options under consideration is putting the amount of activity needed to burn off the calories in a drink on cans and bottles.

Coca-Cola noted it has already made several moves to help customers make smarter choices, such as putting calorie counts on the front of its cans and bottles in the U.S. Last year, it also started posting calorie information on its vending machines ahead of a regulation that will require soda companies to do so by 2014.

Public concern over calories counts is apparent in Coca-Cola's business. In North America, all the growth in its soda business over the past 15 years has come from low- and no-calorie drinks, such as Coke Zero. Diet sodas now account for nearly a third of its sales in the U.S. and Canada. Other beverages, such as sports drinks and bottled water, are also fueling growth.

Even with the growing popularity of diet sodas, however, overall soda consumption in the U.S. has declined steadily since 1998, according to the industry tracker Beverage Digest.

John Sicher, the publisher of Beverage Digest, noted that the industry "put its head in the sand" when obesity and soft drinks first started becoming an issue more than a decade ago. Now, he said Coca-Cola is looking to position itself in the public debate rather than being defined by adversaries.