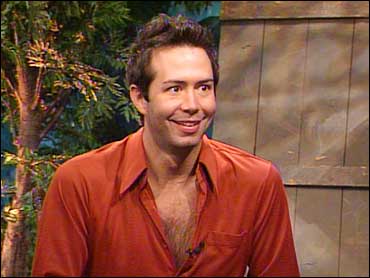 He provided the comic relief on "Survivor: Palau," but Thursday night, the Koror tribe plus Stephenie LaGrossa decided it was time for Coby Archa to play the game only from the bench. He became the first member of the jury.

"I wasn't very funny anymore," Coby tells The Early Show co-anchor Harry Smith. "There is nothing fun about a bitter old queen. That's what I turned into."

It seemed that things were going for him, winning a few games, and even being approached by Gregg Carey to join him in an alliance to get rid of fireman Tom Westman. But then, all of a sudden, he snapped.

"I was sick of them. I was sick of every last one of them. I couldn't stand it anymore," Coby explains. "What made me sick was the fact that no matter how hard I worked; no matter what I had done at camp; no matter how good I was; nobody would play with me. I finally turned into a bitter little kid on the playground who stormed off."

It seemed that it all started when he was left on shore with the women while the other men went fishing but Coby tells The Early Show viewers his rivalry with Tom started way before that.

"Tom was just a dictator," Coby says. "Everything had to be his way or the highway. What I hated most is he acted like he cared about everything else, and he didn't. It was just his way or no way."

He points out the Home Depot challenge as an example, he says, "When we had to pick a representative, he insisted on Ian [Rosenberger]. Tom has had his thumb on every decision that's happened in this tribe, and it's usually his decision."

So it was time for Coby to decide. He, along with Janu Tornell, was the first to jump in the water during the endurance challenge for individual immunity. But it wasn't the doughnut reward that enticed him to end his game. Coby says, "I knew I was going to jump because I was calling their bluff. To me it was like a poker game. At that point, I was like, 'Look, you're either going to play with me, or you're not.'"

Asked if the doughnut was worth the $1 million, he says, "To me, it really wasn't about the doughnut. It was about a statement, play with me or don't play with me. They didn't play with me. Wonder why?"
That is perhaps a question his friend Angie Jakusz asked herself when Coby had the power to pick her to join his tribe and he didn't. Asked by a caller why he didn't, Coby says, "At the time, I didn't pick Angie because I thought we both had big targets on our backs, and if I picked her, it would make my target even bigger. In hindsight, I'd have killed to have Angie on my tribe. She'd have added something. Whereas there was a lot of dead weight on my tribe that I didn't think deserved to be there."

One player he thought should have been part of his tribe was Stephenie. As soon as the Ulong sole survivor joined the tribe, he took her aside out in the open and shared the ins and outs of the tribe.

"My motivation in telling Stephanie all of that was to give her power in the game," he says. "I realize, now in hindsight, it probably took away my power. But I think Stephenie deserved to be there. I wanted to give her power knowing what was going on, whom was against who."

And even though she ended up turning her back on him, Coby tells a caller that his thought was never to get her on his side by sharing what he knew.

Looking back, he says it was a very hard game to play, and notes that what actually made him a target was the fact that he was such a strong competitor.

"I think actually being so good at the challenges was my downfall," he says. "Because I think if we'd have gone to Tribal before then, I don't think I'd have been first. But being stuck with them over and over, I just got sick of them. Looking back, hindsight is 20-20."

Asked by a caller how he feels about being out of the game before some other, weaker players, he says, "It's just part of the game. You have to accept it. There are players in the game and there are pawns in the game. That's just the game, a numbers game. Those people have the numbers so they're still there and I'm not. You can't be bitter. You got to move on. I think they're great, and I love the game so I'm not going to complain."

And he tells co-anchor Rene Syler he has no hard feelings for Janu, who spent most days just resting in the hammock. "She was really sick from about Day 4, like vomiting and things like that. She was pretty sick. So I don't really blame her and at least she was good at the challenges."

Everybody lost a significant amount of weight. Coby says he lost 28 lbs. "I needed to, in those black underwear. Don't you think?" he quips.

Syler was more interested in know how he managed to get his hair to stand up. "I don't know how my hair looks so fabulous, Rene. I don't know. It always did. But her hair always looks fabulous, too," he says.

Asked about his overall "Survivor" experience, he says, "I know it sounds cheesy, but it's a one of those that changed my life when it comes to family, friends. When you're stripped of everything like that, and then have to go back to the real world, it's a totally amazing experience."

Did it make him a better person?

"I hope it made me a better person. Not a bitter person," he says with a smile.