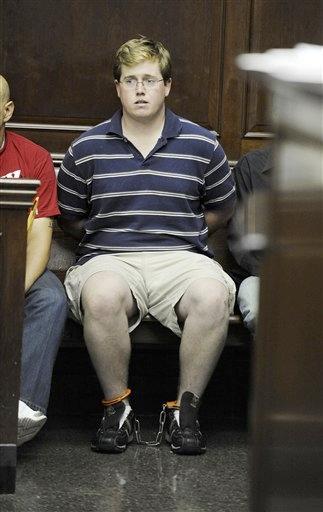 It was a double dose of reality Wednesday night on "Survivor: Palau." Each tribe was forced to send someone packing. And when the voting was done at Tribal Council, Angie Jakusz and Willard Smith were on the outside looking in.

A surprise blitz by Probst prevented Ulong from voting off the chosen teammate, Ibrehem Rahman, who, after all, was the reason the tribe was back on the losing side. But it was not his time to go. He found himself sporting the immunity necklace, courtesy of the Koror tribe.

"I'm a little miffed for the simple fact that the immunity kind of came out of nowhere," Angie tells The Early Show co-anchor Julie Chen. "We weren't really warned about that or anything. We're like, OK. So we have to go. We don't get food. We have to vote somebody out. Then like, we just got a late assignment: We have immunity for somebody, and it's not you!"

Even though Koror had to send someone packing as well, the tribe managed to win once again and their reward was to sit in the jurors' section and listen in on Ulong's Tribal Council while eating and drinking. Their choice left everyone but Ibrehem vulnerable.

Angie says, "There is only so many people that can go around, so I was like, 'Oh, no. We have no backup plan whatsoever.' We never talked about like, 'OK if it's not Ibrehem, then who?' This is tough. I didn't expect it to be a tie between me and Bobby Jon, but it was. I was blown away by that."

Once it was clear she was up against Bobby Jon Drinkard, she knew it was time for her to go.

"The coconut getter! I have no chance to get the coconut-getter," the bartender from New Orleans says. Also, she told an Early Show caller that she was not surprised by Stephenie LaGrossa's vote in the tie-breaker. What surprised her was that she was not voted off unanimously.

Angie explains, "I was really happy because me and Steph had kind of a mini-alliance, just being the two girls left. And she didn't originally vote for me. We both voted for Bobby Jon, which I thought was pretty surprising because I thought everybody was going to vote for me. So I knew, at the end, she was just doing what she had to do. It was like, OK, you have this one person who is -- I'm moderately strong and good around camp. I did what I could. But Bobby Jon is the workhorse. You can't get rid of him."

Willard Smith's regret is that his body was not in better shape.

"I was physically weak," he says. "I had some problems you didn't see on there, on Day 3, that really put me down that I never really recovered from. I had some problems with heat exhaustion and with my feet. If I had been them, I would have chopped me up on Day 4 and used me for shark bait."

That does not mean he was happy to be voted off.

"I was very frustrated," he says, "From Day 4 on, I felt like a guy who was having a bad dream where you're trying to run fast and can't. You just go slower and slower. It's very frustrating because I'm not normally that weak. It was very, very frustrating."

And his plan was to stay under the radar. That's one of the reasons, he tells co-anchor Rene Syler, he did not disclose to other players the fact he is a lawyer. Instead, he said he was a mailman, a position he held in the past.

"By and large, everybody hates lawyers. And most lawyers know it," Willard explains. "There were three lawyers on the show. None of them told people what they did for a living. Jolanda [Jones] said, 'I help people.' And Caryn [Groedel] said, 'I'm involved in an organization to help people.' "

His strategy was to make it to the merge, he says, "The only time you're penalized for being weak is before the merge. And if you can get to the merge, which I was hoping to do by simply having Koror win all of the challenges, it becomes something less of a liability."

Asked by an Early Show caller if he knew about the alliance among Gregg Carey, Jenn Lyon, Janu Tornell and Coby Archa, Willard says, "I didn't know that until I saw the episode last night, and I'm not clear when it happened, before they decided to vote me off or afterwards. Oh, yeah, I would jump at any opportunity to be part of it."

Angie's strategy was to vote off the strong. That is why, she tells a caller, she did not go after James Miller.

She explains, "I think, just in terms of what was happening on the show at the time, that James, we thought, would be easier to, like, get off later on during the show than somebody like Ibrehem and Bobby Jon who is very big and very tough. James was an easier person to go up against in individual challenges later on in the show if we made it to the merge."

Now that she is out of the game, Angie tells Syler she just wished she was still back in Palau.

She says, "I was playing so hard that I deserved to be there a little bit longer. I was not in the mindset of leaving that evening at all. I wasn't expecting this."

Watch The Fat Melt Away ... Literally