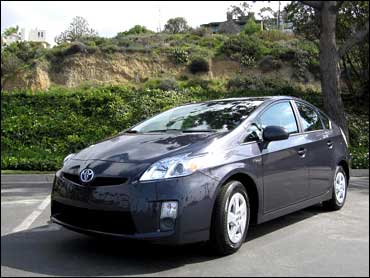 This story was written by CNET's Wayne Cunningham.

The most important thing to remember about the much-anticipated 2010 Prius model update is that Toyota is, at its heart, a conservative company. Add to that Toyota's desire not to spoil the continued success of the previous Prius model, and you get a new car that isn't radically changed from its predecessor.

The Prius still uses Toyota's Synergy hybrid system, a full hybrid system that propels the car under electric power at low speeds. It's still shaped like a speed bump, with a hatchback and a quick drop-off at the back. And the cabin tech still uses a DVD-based navigation system, and lacks a USB port or
iPod integration for the audio system.

However, Toyota did give it a slightly bigger engine, a 1.8-liter four cylinder, increasing the power, and at the same time increasing the fuel economy. Some reshaping around the grille and hood brings in Toyota's new design language, while the roof peak has been moved back a little to increase rear head room and create better aerodynamics. The cabin now includes a floating console and a shift lever with a more traditional layout than the previous one. And Toyota gives the Prius some new tech tricks, such as adaptive cruise control, lane departure warning, and automatic parking.

We got our hands on the new Prius during a preview event, and found that it drives very similar to the previous generation. The net horsepower from the new power train comes out to 134, over the older model's 110, which you can feel during hill climbs and acceleration at speed. Toyota claims a 0 to 60 mph time of 9.8 seconds for the new model. It's hardly a drastic change in power over the old car, but it is usable.

Toyota added driving mode buttons, so you can set the car for Eco or Power driving. The Eco setting maps down the acceleration curve at midthrottle, while Power increases it, resulting in noticeably better hill climb and fast start capability. The effect of these modes are negated when you mash the pedal, which tells the Prius to give it everything it's got no matter what mode it's in. Toyota also added an EV button, which tells the car to drive under electric power until either the driver calls for more acceleration than the electric motor can produce, the battery gets too low, or the car goes above 25 mph.

The fuel economy has been increased from 45 mpg in the older car to 50 mpg in the newer one. During our time behind the wheel, we didn't get a chance to really test the real world fuel economy, but during a fuel economy challenge round, journalists were pulling in numbers above 75 mpg with careful driving.

Unfortunately, the wobbly handling is still in full force with the new Prius. It makes no claims to sporting performance. Toyota did improve the aerodynamics partly be reshaping the body, and partly by putting trays underneath to keep air pressure from backing up in suspension
components. Two fins underneath act as a splitter, which is supposed to increase high speed stability, but during this event our driving routes didn't have any freeway segments.

As for the cabin tech, it's a minor step above what can be had in the current model. The navigation system has improved menu graphics, but is largely the same. It does incorporate live traffic now, a welcome addition. For the audio system, the Prius has a disc slot behind the LCD, satellite radio, and an auxiliary input. The big addition for audio sources is Bluetooth streaming audio, but we would still like to see either a USB port or iPod integration.

One change we don't like so much is that Toyota removed the power flow animation and trip data from the LCD. Instead, this information is shown on the instrument cluster, which, as on the previous Prius, sits in a long display just below the windshield. Unfortunately, the graphics on the instrument cluster are far inferior to what was shown on the LCD. Toyota made this change so that even if you didn't get the optional navigation system, you would still get the power flow display. We think it's time the LCD was standard, even if you don't get navigation. Strangely, Toyota made the average mpg display small and unassuming on the instrument cluster, a number you would think they would want to highlight with large digits.

The new adaptive cruise control feature uses radar in the front of the car to determine the speed of any vehicles in front. In our testing, we found it would slow the Prius down pretty abruptly if needed, but it only works down to about 30 mph. Lane departure warning works in conjunction with a feature called Lane Keep Assist. If you drift over a lane line, the car will sound a tone, then actually give the steering wheel a tug back into the lane. When we tried it, we heard the tone, but couldn't really feel the tug on the steering wheel, although we weren't on an optimal road to try it out.