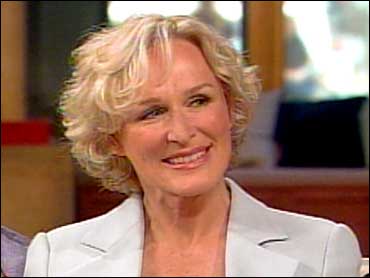 But a new family to the community finds something peculiar about their neighbors' pursuit of perfection.

In the film, the five-time Oscar nominee plays the "perfect" wife, Claire Wellington, the woman whom most in the community aspire to be.

Close tells The Early Show co-anchor Harry Smith her character is "the true Stepford believer. And she whips everyone into the book club and into the 4th of July and into the exercise. It's a perfect world. Everybody should be perfect. Why not?"

Asked if she knows in real life anybody like this, Close says, "I grew up in Greenwich, Conn., which I would say is ground zero for what can be seen as the stereotype of what everybody thinks of as that kind of a woman."

As Wellington, Close gives newly arrived Joanna Eberhart (Nicole Kidman), who until her recent firing was the youngest president of a television network, the tour of the town where the women are everything their husbands want them to be.

Eberhart, however, finds a sinister reason for the unreal atmosphere that she, too, may be trapped in.

So what's the perfect woman? "There is no perfect woman," Close says, "I think we should be embraced for our imperfections and that's one of the things that you come out of this movie with. This movie is sparking a lot of debate, which is wonderful. People laugh a lot and then talk about it a lot, because it does bring up issues like that. "

Smith notes, there's a part of men who sit there and look at this and say, 'So what's wrong with this?'

And Close agrees. "I think they're lying to say you wouldn't want a totally programmable, fabulous woman. What man wouldn't, at least for 24 hours? If she's great for 24 hours, why not a week?"

"The Stepford Wives" is being released by Paramount Pictures, which is owned by the same parent company as CBS.

Some Facts About Glenn Close