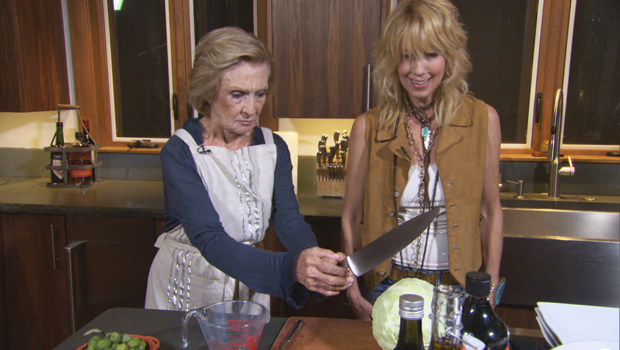 Cloris Leachman kept audiences in stitches on "The Mary Tyler Moore Show." This morning she's "In the kitchen" with our Tracy Smith:

"You know, people describe you as a legend; what do you think of that word?" asked Smith.

"It's a good word! It's just how long you live," Cloris Leachman replied.

"It's not just how long you live. You've won eight Emmy Awards."

She may balk at being called a legend, but with Cloris Leachman it's hard to think of a better word.

In nearly 70 years on stage and on screen, she's truly done it all. Two of those nine Emmys were for her role as Mary Tyler Moore's annoyingly perfect landlord, Phyllis Lindstrom.

It was easy for her to make us laugh, and, it seems, just as easy to break our hearts.

For an emotional scene in 1971's "The Last Picture Show," director Peter Bogdanovich allowed her just one take.

"You think you could?"

Still, it was good enough for an Oscar.

Back then, she was also raising five children, and would try to cook dinner for them nearly every night.

Dinah Englund is her youngest: "I remember when I was a kid, there would be five of us, and then everybody would come home at different times, and she would literally make five different gourmet vegetarian meals, just one after the other. Never stopped. Who does that?"

"Who does that AND has a side job that wins you multiple awards going on?" said Smith.

And here's something that's often on the menu at the Leachman house: Cabbage Salad with a family secret dressing.

"I don't even know what the ingredients are. I just put stuff in," said Leachman. "Sometimes I hit it and sometimes I miss it. But the idea really is the taste of cold cabbage and then these ingredients, that's what changes. And you just have to hit it lucky."

Her dressing is an ad-lib concoction of garlic, vinegar, mustard and some really pricey cheese, but it all works.

"Mmm," purred Smith. "Oh my goodness. That's so much more than what I thought it was going to be."

And just the thing for someone who's been a vegetarian for most of her adult life.

Smith asked, "Do you miss bacon?"

"I couldn't put it in my mouth. Just over the years I haven't done it, and now I can't. Isn't that odd? Very odd."

Leachman may not be famous for her cabbage salad, but she is famous for one of the best-known running gags in movie history:

She lives near a horse farm in the hills above L.A. ... and it seems the whinnying neighbors were in on the joke.

"What was the meaning of the horse in 'Young Frankenstein'?" Smith asked.

"I asked Mel [Brooks] a few years ago, and he said, 'Blucher means glue.'"

Mel may have been kidding about the words, but even now it's still just as funny.

At 89, she's still a fixture on the big screen, with more movies due out next year. But no matter what the part, Cloris Leachman knows just how to serve it up.

And how does that feel? "It's hilarious!" Leachman said. "I can't even count that high!"

"Is it still fun?" Smith asked.

"Oh, more than anything!"