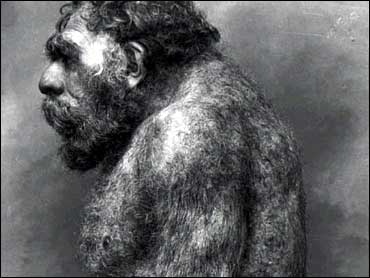 Last year DISCOVER asked the question, "Did We Mate With Neanderthals, or Did We Murder Them?" Now, Zach Zorich at Archaeology magazine is asking another big question about our hominid siblings: Should we bring them back?

Thanks to a slew of recent advances, the possibility is getting closer. 80beats reported a year ago that researchers had published the rough draft of the Neanderthal genome. However, that's likely to contain many errors because it's so difficult to reconstruct ancient DNA.

Within hours of death, cells begin to break down in a process called apoptosis. The dying cells release enzymes that chop up DNA into tiny pieces. In a human cell, this means that the entire three-billion-base-pair genome is reduced to fragments about 50 base-pairs long.

Even if scientists succeed in figuring out the entire Neanderthal genome, they'd be faced with another problem before they could even consider the possibility of cloning one of these ancient hominids: We don't have any living Neanderthal cells to work with. Thus, researchers will have to figure out how to put DNA into chromosomes, and how to get those chromosomes into the nucleus of a cell. What about altering the DNA inside a living human cell, and tweaking our genetic code to match the Neanderthal's? This kind of genetic engineering can already be done, but very few changes can be made at one time. To clone a Neanderthal, thousands or possibly millions of changes would have to be made to a human cell's DNA

Even if scientists manage to put Neanderthal DNA in a cell nucleus, their problems aren't over. The next step in creating a baby clone is to move the cell nucleus into the egg of a related species in a technique called nuclear transfer, and then implanting the altered egg in a female who can bear it to term. But in this process, which has been extensively tested on animals, cells often get sick or die, causing fetuses to die in the womb or clones to die young.

That's why the vast majority of scientists oppose using this method on people. Even if nuclear transfer cloning could be perfected in humans or Neanderthals, it would likely require a horrifying period of trial and error.

But Archaeology suggests that many of these obstacles will eventually be overcome, and proposes another cloning option: making Neanderthal stem cells. Last year researchers managed to turn mouse skin cells back into a pluripotent state, where they can act like stem cells, and used those to create a cloned mouse. Cloning a Neanderthal is a lot different than cloning a mouse, but if the process worked, a cloned Neanderthal would grow up with their genes expressing they way they were meant to.

That's the "could we." But what about the "should we?" More work has been done on this than you might think. In 1997, Stuart Newman, a biology professor at New York Medical School attempted to patent the genome of a chimpanzee-human as a means of preventing anyone from creating such a creature. But he lost his case because the patent office said it would violate the 13th amendment prohibitions against slavery. And since Neanderthals would be even more human, it stands to reason that they'd receive at least some human rights protections.

Rightfully so. But as the bioethicist Bernard Rollin points out in the Archaeology piece, there's more to worry about than the law. While Neanderthals are our close relatives on the evolutionary tree, you'd know one if you saw one. Tulane anthropologist Trenton Holliday argues that they could talk and act like us, therefore eventually they'd fit in. But that seems like wishful thinking. With no culture, no peers, and an unknown capacity to cope with the modern world mentally or physically, a Neanderthal would be adrift-caught between a zoo animal and a human being. The main point in cloning one would be for scientists to study it, but as law professor Lori Andrews says, a Neanderthal could be granted enough legal protection to make doing extensive research on it illegal, not just unethical.

That's not to say there would be no benefits to science. But some things are best left in the past.