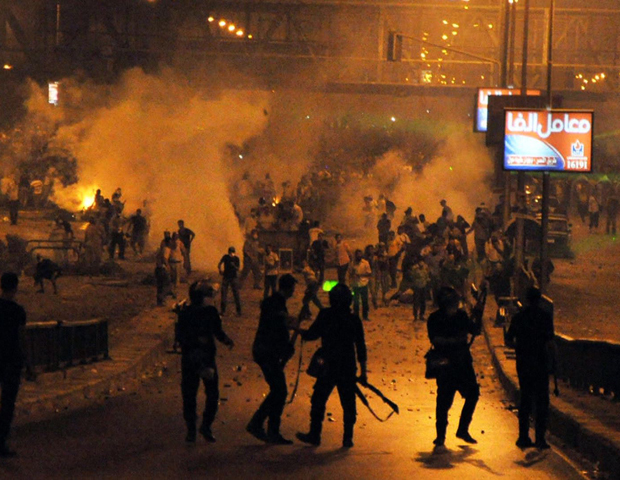 The Obama administration must decide by September 30, the end of the fiscal year, whether or not to release the remainder of the $1.5 billion package of U.S. aid to Egypt.

Since July 3 - the day that elected President Mohammed Morsi was ousted by the Egyptian military - the administration has avoided labeling the event as a coup in order to maintain the leverage that comes with aid. Yet administration officials maintain that the United States has been abiding by U.S. law - Section 7008 - which requires a financial freeze to any government that comes to power in a coup d'etat, or, "decree in which the military plays a decisive role."

As administration lawyers review all parts of aid it can or cannot continue to provide to Egypt's military-led government, the State Department says the majority of non-military aid from the United States continues.

During Tuesday's State Department briefing, deputy spokeswoman Marie Harf told reporters it was her understanding that, "until a decision has been broadly made about the future of our assistance to Egypt, we will continue doing things like paying our bills." Harf declined to detail which portions continue beyond saying that a portion she characterized as "tiny" was under legal review since it related to security.

Administration lawyers are reviewing what they can do with the remaining $585 million in foreign military financing that has not been obligated.

State Department spokesman Jen Psaki said around $650 million dollars is currently sitting in an account for Egypt at the Federal Reserve Bank of New York. That money is used to finance purchases of military equipment - including F-16s, Apache helicopters and other items - from U.S. defense contractors. If the United States did cut off that aid, the funds would likely be used to wind down the existing program.

Sources on Capitol Hill maintain that they have been told that there has been no military financing provided since the July 3 ouster. There remains confusion on the Hill about why the administration is waiting to label the military ouster as a coup while it privately insists it is abiding by Section 7008, which applies in the event of a coup.

An aide in Vermont Democratic Sen. Patrick Leahy's office said the State Department and Foreign Operations Appropriations Subcommittee was told the "transfer of military aid was stopped, that this is current practice, not necessarily official policy, and there is no indication of how long it will last."

A decision by the Obama administration to designate the July 3 ouster as a coup would require a shutdown of nearly $1.5 billion in U.S. economic assistance and military financing; that money was already authorized by Secretary Kerry.

Previously, Congress had put a hold on $260 million in economic assistance promised by the State Department to Morsi's government before the July 3 coup.