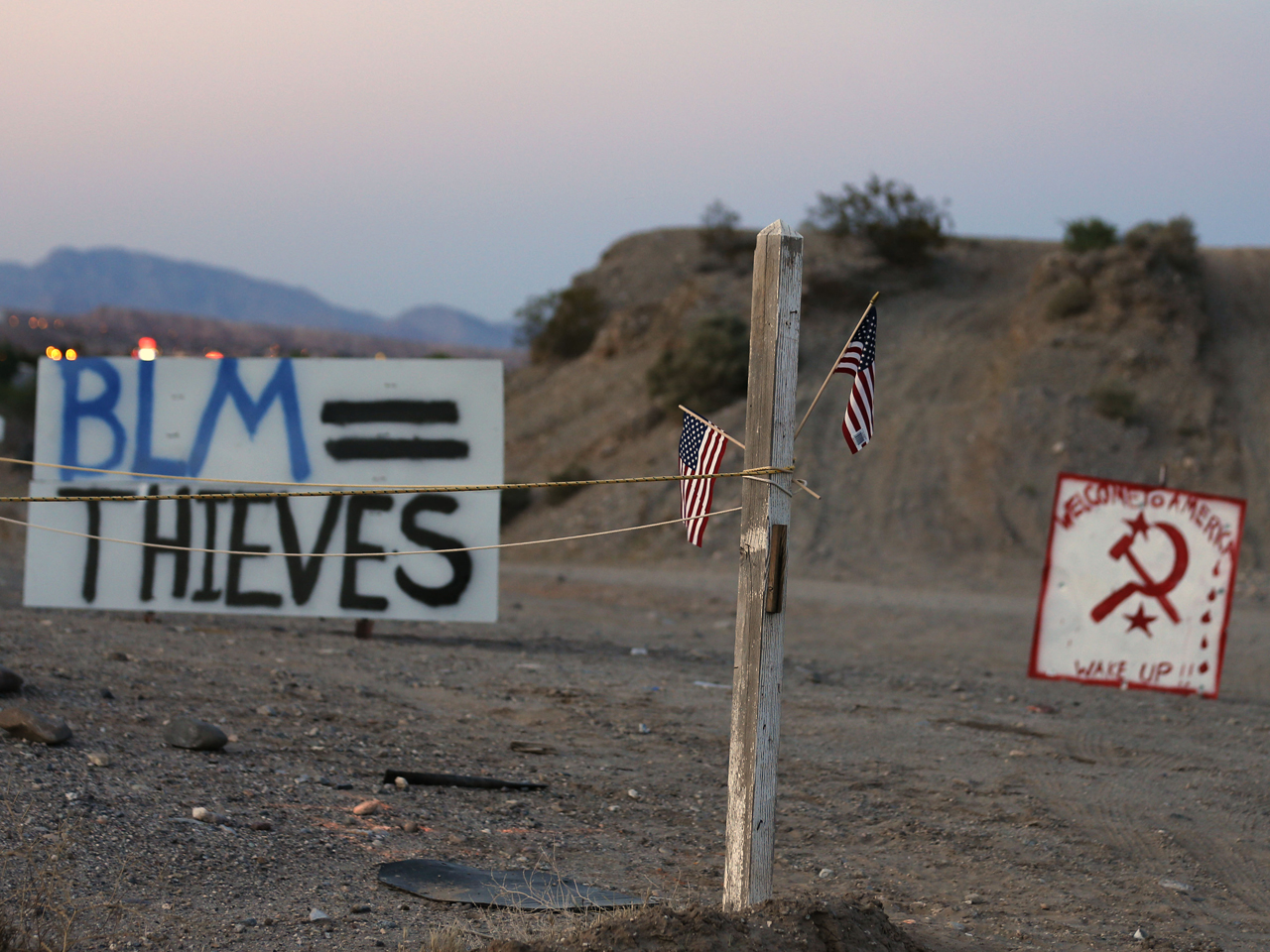 MESQUITE, Nev. - A day after blinking in a showdown on the range, federal land managers pledged to pursue efforts to resolve a conflict with a southern Nevada rancher who has refused to pay grazing fees for 20 years.

Bureau of Land Management spokesman Craig Leff said the agency would continue to try to resolve the matter involving rancher Cliven Bundy "administratively and judicially." Bundy owes more than $1 million in grazing fees, according to the bureau.

"The door isn't closed. We'll figure out how to move forward with this," he said Sunday. He declined to comment on possible options.

The fight between Bundy and the Bureau of Land Management widened into a debate about states' rights and federal land-use policy. Bundy does not recognize federal authority on land he insists belongs to Nevada. The debate over who is right became so heated that a self-described armed local militia has come to his aide.


However, even some of Bundy's own neighbors don't buy his arguments, reports CBS affiliate KLAS in Las Vegas.

"I feel that the rule of law supercedes armed militias coming in from all over the country to stand with a law-breaking rancher, which is what he is" Mesquite resident Elaine Hurd told KLAS.

On Saturday, the bureau released about 400 head of cattle it had seized from Bundy back to him only hours after announcing a premature halt to the roundup due to safety concerns. The operation, expected to take up to a month, ended after only a week.

The cattle were freed after hundreds of states' rights protesters, some of them armed militia members, showed up at corrals outside Mesquite to demand the animals' release.

But Leff stressed that the bureau did not take part in the negotiations.

"The BLM and National Park Service did not cut any deal and negotiate anything," he said. "There was no deal we made."

The several hundred cows gathered during the roundup were short of the BLM's goal of 900 cows that it says have been trespassing on U.S. land without required grazing permits for over 20 years.

The showdown over Bundy's cattle was the latest chapter in the Sagebrush Rebellion, which was launched by Nevada lawmakers in the 1970s in an attempt to turn control of federal land to the states.

Environmentalists accused the bureau of capitulating to threats of violence from armed Bundy supporters and urged them to pursue action against the rancher.

"The BLM has a sacred duty to manage our public lands in the public interest, to treat all users equally and fairly," said Rob Mrowka, senior scientist with the Center for Biological Diversity. "Instead it is allowing a freeloading rancher and armed thugs to seize hundreds of thousands of acres of the people's land as their own fiefdom."

"The BLM is setting a dangerous precedent in announcing that it will pick and choose who has to follow federal laws and who it will reward for violating them," he added.

Leff declined to comment, reiterating that the bureau's top concern was the safety of its employees and the public.

In April 2012, the Center for Biological Diversity filed a notice of intent to sue the bureau for canceling a planned roundup of Bundy's cattle at the last minute.

The dispute that ultimately triggered last week's roundup dates to 1993, when the bureau cited concern for the federally protected desert tortoise in the region.

Record wind chill of 108 degees below zero set atop Mount Washington
Thanks for reading CBS NEWS.
Create your free account or log in
for more features.
View CBS News In
CBS News App Open
Chrome Safari Continue
Be the first to know
Get browser notifications for breaking news, live events, and exclusive reporting.