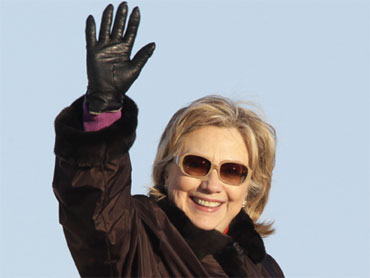 U.S. Secretary of State Hillary Rodham Clinton on Thursday opened two days of talks with Russian leaders on nuclear arms control and other security issues, and separately with top international diplomats on the outlook for bringing Israel and the Palestinians back to peace talks.

Clinton arrived in the Russian capital after an overnight flight from Washington and was to be joined by the Obama administration's special envoy for Mideast peace, George Mitchell, to participate in talks with diplomats from Russia, the European Union and the United Nations. They were discussing the crisis in U.S.-Israeli relations and stalled efforts to restart Mideast peace negotiations.

Clinton was meeting one-on-one with Russian Foreign Minister Sergey Lavrov, and the two were then dining with their U.N. and EU colleagues. Together they form the so-called Quartet of Mideast peacemakers; they are scheduled to hold formal talks on Friday.

The Quartet meeting was intended to lend support for the start this week of indirect talks between the Israelis and Palestinians. But those talks fell apart before they began - a casualty of Israel's provocative approval of new housing in east Jerusalem.

The diplomatic crisis erupted last Tuesday, when Israel announced during a visit by Vice President Joe Biden that it would build 1,600 apartments for Jews in disputed east Jerusalem, the sector of the holy city that the Palestinians claim for a future capital. Clinton called the announcement an insult and "a deeply negative signal" for the peace process; she even questioned Israel's commitment to its relationship with the U.S.

Meanwhile, a rocket fired from the Palestinian territory the Gaza Strip on Thursday killed a farm worker in southern Israel, the first such death since Israel waged a brutal war on Gaza just over a year ago.

Clinton's spokesman, P.J. Crowley, said she was awaiting a phone call from Israeli Prime Minister Benjamin Netanyahu for clarification on how the Israeli government intends to respond to a U.S. call for rescinding the east Jerusalem housing decision and to make a gesture of renewed commitment to engaging seriously with the Palestinians in peace talks.

In an op-ed published Thursday in The New York Times, Israeli Ambassador to the U.S. Michael Oren reasserted his government's opposition to any restrictions on building in east Jerusalem. But he denied that U.S.-Israel relations were "at a historic low point" because of the dispute.

"Because we share fundamental values - democracy, respect for individual rights and the rule of law - our friendship can sustain occasional disagreements, and remain unassailably solid," Oren wrote.

The U.S. and Russia are said to be close to concluding a follow-up to the Strategic Arms Reduction Treaty, or START, which expired in December, but the final bargaining has been rocky.

William Burns, the undersecretary of state for political affairs, told reporters traveling with Clinton that her visit to Moscow was an important opportunity to advance the arms talks, but does not necessarily mean an agreement is imminent.

"We are getting closer," Burns said on the flight from Washington, but he added he could not estimate how much longer it would take to settle the remaining issues. He declined to identify the specific sticking points.

The agreement is expected to reduce each side's long-range nuclear weapons by about one-quarter from levels set in a 2002 treaty that superseded the earlier START pact. The newer treaty did not include an extension of agreed measures to verify each side's compliance. The current negotiations include verification measures that would replace those in the 1991 deal, which expired last December.