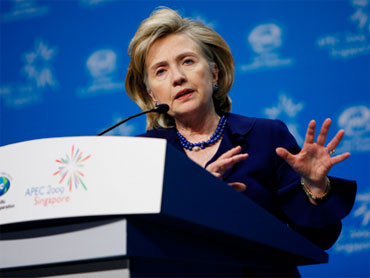 U.S. Secretary of State Hillary Rodham Clinton said Wednesday that Washington will not impose new conditions on Myanmar's junta in exchange for better relations, but will not lift sanctions until it makes progress on democracy.

Clinton's comments reflect an easing of U.S. policy on Myanmar, which has been ruled by the military since 1962. The junta has been widely criticized for holding pro-democracy leader Aung San Suu Kyi, a Nobel Peace Prize laureate, under detention.

Clinton, who met Wednesday with the foreign ministers of Asia-Pacific countries ahead of a regional summit, said she "reiterated that U.S. sanctions will remain in place until we see meaningful progress in key areas."

She told reporters that China, India and the 10-nation Association of Southeast Asian Nations also must play a greater role in pushing Myanmar's junta toward democracy.

Asked if the United States has set any conditions, including the return of Suu Kyi to political life, for improving relations with Myanmar, Clinton made it clear that the U.S. is now committed to engaging the generals rather than ostracizing them.

"This has to be resolved within the Burmese people themselves. We are not setting or dictating any conditions," she said. Myanmar is also known as Burma.

But a senior U.S. official later said that Suu Kyi's release and return to politics would be "an essential precondition to move forward." The official spoke on condition of anonymity because he was discussing internal administration thinking.

Last week, two senior U.S. diplomats went to Myanmar for talks with the junta and also had a private meeting with Suu Kyi. It was the highest-level U.S. visit to Myanmar in 14 years.

Clinton said although the visit was constructive, "there is a lot of work to do. We have no illusions that any of this would be easy or quick."

On Sunday, President Barack Obama will attend the first-ever meeting of U.S. and ASEAN leaders on the sidelines of the Asia-Pacific Economic Cooperation summit. He is to sit at the same table with Myanmar Prime Minister Gen. Thein Sein.

The Myanmar government has said it intends to hold elections next year but has not clarified whether Suu Kyi will be allowed to participate.

The junta refused to honor the result of the last elections in 1990 when Suu Kyi's party won by a landslide. Suu Kyi has spent 14 of the last 20 years in detention, and remains under house arrest.

Clinton said the U.S. wants to create the opportunity for the people of Myanmar to have "free and credible elections" next year.

"This is a very challenging situation as many of the countries can attest but the U.S. is committed to moving forward," she said.

After the U.S.-ASEAN meeting, the leaders are expected to issue a joint call urging Myanmar to hold "free, fair, inclusive and transparent" elections.

"The statement we're trying to make here is that we're not going to let the Burmese tail wag the ASEAN dog," Jeffrey Bader, a National Security Council official, told reporters in Washington, D.C.