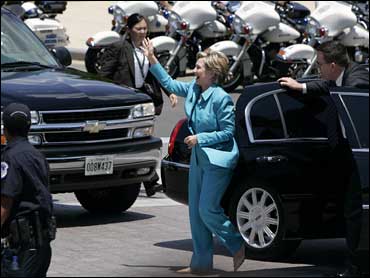 She came, she saw, she hugged.

Hillary Rodham Clinton returned to Congress Tuesday for the first time since suspending her presidential campaign, to a loud round of applause and hugs from Democrats as they try to bridge the rifts left by a long, bruising presidential primary.

The return of the New York senator had been much anticipated since she suspended her race for the White House earlier this month after Barack Obama clinched the necessary number of delegates to secure the party's nomination.

"Glad to be here, my friends, glad to be here," she said as she entered the building, adding later: "We have a lot ahead of us and I am rolling up my sleeves and getting back to work."

Mikulski, who minutes earlier had been impatiently tapping her watch and peering out the door as she waited for Clinton, declared: "We need you! We need your vote!"

Schumer, a major party fundraiser, immediately answered, "We need more than your vote!"

The group then entered the weekly lunch for Democratic senators, where the applause and clinking of silverware carried far into the hallway where reporters had gathered.

Inside, Clinton gave a short speech saying she was glad to be back and planned to do everything she could to help Obama win the White House and Democrats win races across the country.

"It was the kind of pumped up talk that you would expect," said Sen. Ben Nelson, D-Neb., with Clinton telling them "we should all join forces."

She emerged from the meeting about an hour later with Senate Majority Leader Harry Reid and Schumer.

Reid called it "one of the most emotional caucuses that I've attended."

Clinton said she returned to Congress "with an even greater depth and awareness of what we have to do here in Washington," Clinton said.

Many of voters' most pressing concerns are about problems that cannot be solved on a local or state level, she said.

Wednesday, Clinton is to visit House Democrats. On Friday, she travels to New Hampshire for a joint appearance in the town of Unity, where each candidate received exactly 107 votes in the primary.

Speaking to reporters Tuesday, she dismissed a question about the likelihood she may be asked to join Obama on the ticket as his pick for vice-president.

"I am not seeking any other position. ... This is totally Senator Obama's decision and that's the way it should be," she said. "My role is to be the very best senator I can be and represent the greatest state in our country."

Sen. John Kerry, the party's unsuccessful standard-bearer in 2004, said Clinton comes back "with great respect and affection, and with a readiness by a lot of people here to just go to work with her."

As for any advice he would offer her, he said it may take time to adjust from the frenetic pace of the campaign trail to the pace of the Senate.

"You have to be kind of patient and focused and disciplined, and I'm confident she'll be all of those things," he said.
By Devlin Barrett