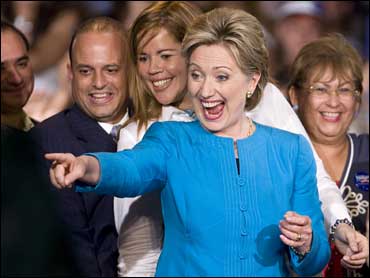 With 85 percent of precincts reporting, Clinton was leading Obama 68 percent to 32 percent.

Before cheering supporters in San Juan, she predicted she would have more combined votes than her rival when the primaries end Tuesday night, claimed victories in key swing states and said that no contender will command enough delegates to claim the nomination.

"In the final assessment I ask you to consider these questions. Which candidate best represents the will of the people who voted in this historic election?" Clinton said in an appeal to some 200 uncommitted superdelegates who hold the balance of power in the fight for the nomination.

At a rally in Mitchell, South Dakota, Obama congratulated Clinton for her Puerto Rico win.

Senator Clinton is an outstanding public servant," Obama said. "She has worked tirelessly on this campaign, she has been a great Senator for the state of New York and she is going to be a great asset when we go into November to make sure that we defeat the Republicans. That I can promise you."

Seventy-two percent of those polled in Puerto Rico said that Clinton shares their values, and 54 percent said that Obama does.

Obama's aides indicated that the 46-year-old Illinois senator would amass the 2,118 delegates needed to claim the nomination within days. "We hope this week, absolutely," said spokesman Robert Gibbs. Montana and South Dakota hold primaries on Tuesday, the last of the primary campaign season.

Gibbs' confidence reflected the outcome of Saturday's meeting of the Democratic Party's rules and bylaws committee. Before an audience that jeered and cheered by turns, the panel voted to seat disputed delegations from Michigan and Florida, but give each delegate only one-half vote rather than the full vote sought by the Clinton campaign.

While the decision narrowed the gap between Clinton and Obama, it also erased the former first lady's last, best chance to change the course of the campaign.

Obama has so far won 19 delegates in Puerto Rico, while Clinton has added 42 to her total. Obama had 2,069 delegates to 1,912 for Clinton in the latest CBS News delegate count. 2,118 delegates are now needed to clinch the nomination.

Obama campaigned in South Dakota during the day, while Clinton was in Puerto Rico hoping for a victory celebration.

There are 31 delegates combined at stake in Montana and South Dakota on Tuesday, and Obama's high command sounded confident that enough superdelegates were poised to quickly climb on and deliver him the nomination.

In addition, there have been numerous statements by party leaders in recent days indicating they favor a quick end to the presidential race so the party can begin unifying for the fall race against John McCain, the Arizona senator who wrapped up the Republican nomination months ago.

And while Clinton's campaign said it reserved the right to challenge the decision concerning Michigan's delegates, Speaker Nancy Pelosi rushed out a statement Saturday night that congratulated the committee "for its good work."

The California Democrat has been neutral in the race, but also has been calling uncommitted lawmakers in recent days, urging them to issue their own endorsements soon after Tuesday.

Gibbs also did not rule out the possibility that Obama will seat the Michigan and Florida delegations at full strength if he is the nominee.

"I think any nominee may make some decisions at some point regarding those delegations," he said on ABC's "This Week."

McAuliffe, appearing on the same program, declined to say what Clinton would do. "We'll see where we are when we finish up Tuesday," he said. "Then superdelegates will begin to move."

He, as well as Clinton's communications director, Howard Wolfson, said the former first lady had won more votes that Obama in the course of the primary campaign.

Gibbs disputed that - and Clinton's claim includes the results of Florida, where no campaigning occurred, as well as Michigan, where Obama's name was not on the ballot. Her calculation fails to include caucuses in Iowa, Maine and Washington, all of which Obama won. In those states, delegates were awarded but party officials did not report any popular vote breakdown between the two candidates.