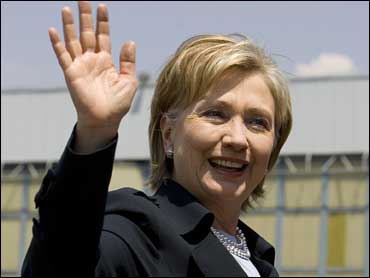 Secretary of State Hillary Rodham Clinton on Wednesday warned North Korea that firing a missile for any purpose would be a "provocative act" that would have consequences.

North Korea is loading a rocket on a launch pad in anticipation of the launch of a communications satellite between April 4 and 8, U.S. counterproliferation and intelligence officials said. North Korea announced its intention to launch the satellite in February, but regional powers worry the claim is a cover for the launch of a long-range missile capable of reaching Alaska.

Clinton told reporters during a visit to Mexico City that the U.S. believes the North Korean plan to fire a missile for any purpose would violate a U.N. Security Council resolution barring the country from ballistic activity. She linked a missile launch to the future of talks between the U.S., North Korea and four other nations aimed at ending North Korea's nuclear weapons program.

"We have made it very clear that the North Koreans pursue this pathway at a cost and with consequences to the six-party talks, which we would like to see revived," Clinton said.

"We intend to raise this violation of the Security Council resolution, if it goes forward, in the U.N.," she said. "This provocative action in violation of the U.N. mandate will not go unnoticed and there will be consequences."

National Intelligence Director Dennis Blair said earlier this month that all indications suggest North Korea will in fact launch a satellite. However, North Korea faked a satellite launch in 1998 to cloak a missile development test.

In 2006, North Korea launched a Taepodong-2 that blew up less than a minute into flight.

South Korea, the U.S. and Japan have urged North Korea to refrain from launching a satellite or missile, calling it a violation of the Security Council resolution. North Korea insists it has the right to develop its space program and on Tuesday warned the U.S., Japan and its allies not to interfere with the launch.

In Seoul, officials at South Korea's National Intelligence Service and the Defense Ministry were not available for comment.

South Korea's chief nuclear envoy, Wi Sung-lac, said Wednesday after returning from talks with his Beijing counterparts that a launch would trigger a response.

"If North Korea launches rocket, certain countermeasures are unavoidable," he said. He refused to elaborate, saying the measures, including any sanctions, would be discussed among U.N. Security Council member nations.

It probably won't be clear if the latest launch is a satellite or a missile test until footage can be analyzed after the event; the trajectory of a missile is markedly different from that of a satellite.

Analysts have been watching for signs of a satellite or missile on the launch pad in Musudan-ni, the northeast coastal launch site. Satellite imagery from March 16 showed progress toward mounting a rocket, with a crane hovering over the launch pad, said Christian LeMiere, an editor at Jane's Intelligence Review in London.

LeMiere said that once the rocket is mounted, scientists would need at least a week to fuel and carry out tests before any launch. Images from earlier this month did not indicate the rocket or missile had been mounted, he said.