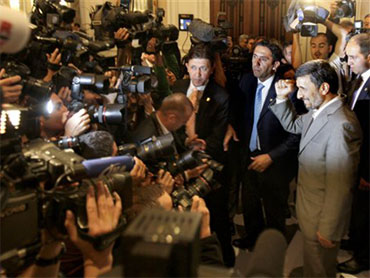 Secretary of State Hillary Rodham Clinton on Tuesday called the proposed new U.N. sanctions against Iran's suspect nuclear program the toughest ever, a day before the U.N. Security Council was expected to vote on the measure.

CBS News has learned that Iran's U.N. Ambassador, Mohammad Khazaee, is expected to speak after the vote.

Clinton told reporters in Ecuador's capital that there is strong support for a fourth resolution penalizing Iran for its refusal to prove its nuclear program is peaceful and defying international demands to halt uranium enrichment.

Regardless of three rounds of previously-imposed sanctions on Iran during the past four years, Iran continues to expand its nuclear facilities and skeptics fear that Iran's defiance and support for terror groups will continue to grow, reports CBS News foreign affairs analyst Pamela Falk.

"I think it is fair (to say) that these are the most significant sanctions that Iran has ever faced," Clinton said at a news conference with Ecuador's president. "The amount of unity that has been engendered by the international community is very significant."

She declined to predict the outcome of the vote in the 15-member Security Council, but U.S. Defense Secretary Robert Gates in London said the measure would pass and pave the way for tougher additional measures by the U.S. and its allies.

"The strategy here is a combination of diplomacy and pressure to persuade the Iranians that they are headed in the wrong direction in terms of their own security, that they will undermine their security by pursuit of nuclear weapons, not enhance it," Gates said.

In the final version of the U.N. resolution, obtained Monday by The Associated Press, sanctions would be tougher than previous penalties but still far short of crippling economic punishments or an oil embargo.

The sanctions would ban Iran from pursuing "any activity related to ballistic missiles capable of delivering nuclear weapons," bar Iranian investment in activities such as uranium mining, and prohibit Iran from buying several categories of heavy weapons including attack helicopters and missiles.

Annexes to the resolution, agreed to Tuesday, would target 40 new Iranian companies or organizations, including 15 linked to Iran's powerful Revolutionary Guard.

One person was added to the previous list of 40 Iranians subject to an asset freeze, Javad Rahiqi, who heads the Atomic Energy Organization of Iran's Esfahan Nuclear Technology Center.

Iran has threatened to withdraw the offer to export some of its uranium under a deal brokered by Brazil and Turkey because the new Resolution proposes tough new enforceable sanctions, including financial restrictions on Iranian banks, Iranian businesses and on individual members of the powerful military force, the Revolutionary Guard, and it bans Iranian purchase of certain missiles, combat aircraft and warships, reports Falk. And although Iran's defiant President, Mahmoud Ahmadinejad, continues to claim that Iran's nuclear program is for electricity and medical use, the new Resolution gained momentum because of an international watchdog agency report that said that Iran now has enough uranium - if enriched - to build two nuclear weapons and that its intentions have not been proven to be purely peaceful.

The Security Council held a private meeting Tuesday afternoon on Iran to meet some of the concerns of Brazil and Turkey, which had called for an open "political debate" on the broader Iranian nuclear issue first.

After Tuesday afternoon's council meeting, U.S. Ambassador Susan Rice predicted the resolution would be adopted by "a strong majority."

"It is a strong, broad-based resolution that will impose meaningful and significant new sanctions on Iran," she said. "Our aim remains to persuade Iran to halt its nuclear program and negotiate constructively and in earnest with the international community."

Iran insists its nuclear program is purely peaceful, aimed at producing nuclear energy and medical isotopes, but the United States and its Western allies believe Tehran's real goal is to build atomic weapons.

After weeks of closed-door negotiations, the U.S., Britain and France won crucial support from Russia and China for new sanctions, but they have faced a tough campaign to win support from the rest of the Security Council.

When the original draft resolution was circulated on Oct. 18 - shortly after the Turkey-Brazil-Iran deal was announced - diplomats said Brazil refused to negotiate, and it has expressed opposition to new sanctions along with Turkey and Lebanon.

The latest draft, circulated "in blue" text signaling it is in final form, adds language noting Turkey and Brazil's efforts "that could serve as a confidence building measure."

The resolution, if adopted, would impose the fourth round of sanctions against Iran. The six countries have been trying for years to draw Tehran into serious negotiations about its nuclear program.

The final draft also calls on all countries to cooperate in cargo inspections - which must receive the consent of the ship's flag state - if there are "reasonable grounds" to believe the cargo could contribute to Iranian nuclear program.

On the financial side, the draft calls on - but does not require - countries to block financial transactions, including insurance and reinsurance, and ban the licensing of Iranian banks if they have information that provides "reasonable grounds" to believe these activities could contribute to Iranian nuclear activities.

After Gates and new British defense chief Liam Fox met in London Tuesday, they warned that an Iranian nuclear weapon would start a Mideast arms race.

"The overwhelming fear is that if Iran is to become a nuclear weapons state that will be the end" of the international treaty limiting the spread of atomic weapons, Fox said.

"We surely want to do more than leave the next generation a legacy of a new nuclear arms race in the world's most unstable region."

Estimate of Iran's nuclear progress vary, but most experts believe the nation is at least two years away from being able to build a workable weapon.

"I do not think we have lost the opportunity to stop the Iranians from having a nuclear weapon," Gates said. "I think the clock is ticking."