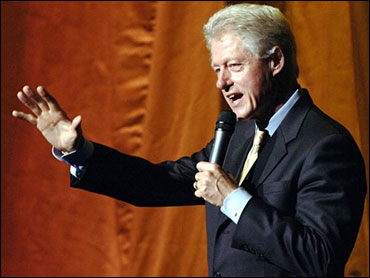 Former President Bill Clinton told a global audience of diplomats, environmentalists and others on Friday that the Bush administration is "flat wrong" in claiming that reducing greenhouse-gas emissions to fight global warming would damage the U.S. economy.

With a "serious disciplined effort" to develop energy-saving technology, he said, "we could meet and surpass the Kyoto targets in a way that would strengthen and not weaken our economies."

Mr. Clinton, a champion of the Kyoto Protocol, the existing emissions-controls agreement opposed by the Bush administration, spoke in the final hours of a two-week U.N. climate conference at which Washington has come under heavy criticism for its stand.

Most delegations appeared ready Friday to leave an unwilling United States behind and open a new round of negotiations on future cutbacks in the emissions blamed for global warming.

"There's no longer any serious doubt that climate change is real, acclerating and caused by human activities," said Mr. Clinton, whose address was interrupted repeatedly by enthusiastic applause. "We are uncertain about how deep and the time of arrival of the consequences, but we are quite clear they will not be good."

Canadian officials said the U.S. delegation was displeased with the last-minute scheduling of the Clinton speech. But U.S. delegation chief Paula Dobriansky issued a statement saying events like Mr. Clinton's appearance "are useful opportunities to hear a wide range of views on global climate change."

The former U.S. chief executive spoke between the official morning and afternoon plenary sessions of the conference, representing the William J. Clinton Foundation, which operates the Clinton Global Initiative, a program focusing on climate change as a business opportunity.

In the real work of the conference, delegates from more than 180 countries bargained behind closed doors until 6:30 a.m. Friday, making final adjustments to an agreement to negotiate additional reductions in carbon dioxide and other gases after 2012, when the Kyoto accord expires.

Efforts by host-country Canada and others to draw the United States into the process were failing. The Bush administration says it favors a voluntary approach, not global negotiations, to deal with climate issues.

"It's such a pity the United States is still very much unwilling to join the international community, to have a multilateral effort to deal with climate change," said Kenya's Emily Ojoo Massawa, chair of the African group of nations at the two-week-long conference.

Mr. Clinton's vice president, Al Gore, was instrumental in final negotiations on the 1997 treaty protocol that was initialed in the Japanese city of Kyoto and mandates cutbacks in 35 industrialized nations of emissions of carbon dioxide and five other gases by 2012.

A broad scientific consensus agrees that these gases accumulating in the atmosphere, byproducts of automobile engines, power plants and other fossil fuel-burning industries, contributed significantly to the past century's global temperature rise of 1 degree Fahrenheit. Continued warming is expected to disrupt the global climate.

In the late 1990s the U.S. Senate balked at ratifying Kyoto, and the incoming President Bush in 2001 formally renounced the accord, saying it would harm the U.S. economy.

The protocol's language requires its member nations to begin talks now on emissions controls after 2012, when the Kyoto regime expires. The Canadians and others also saw Montreal as an opportunity to draw the outsider United States into the emission-controls regime, through discussions under the broader 1992 U.N. climate treaty.

But the Americans have repeatedly rejected the idea of rejoining future negotiations to set post-2012 emissions controls. The Canadians continued to press for agreement early Friday, offering the U.S. delegation vague, noncommittal language by which Washington would join only in "exploring" "approaches" to cooperative action.

While rejecting mandatory targets, the Bush administration points to the U.S. government's spending of $3 billion a year on research and development of energy-saving technologies as a demonstration of U.S. efforts to combat climate change.

A robot designed to annoy telemarketers