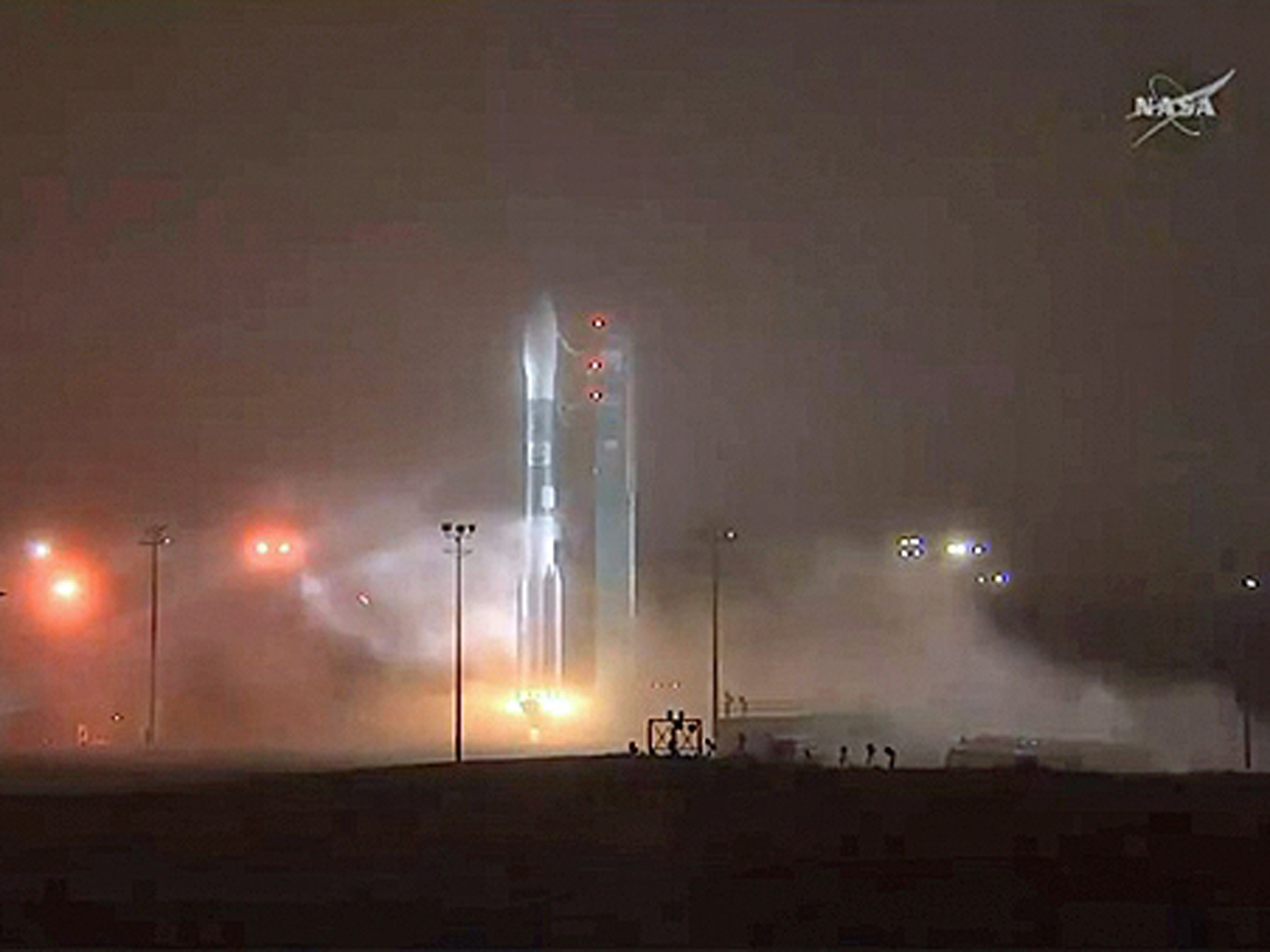 A workhorse Delta 2 rocket roared to life and climbed away from California coast early Wednesday, boosting an environmental research satellite into orbit on a $468 million mission to precisely measure global carbon dioxide levels, a key factor in climate change.

The Orbiting Carbon Observatory 2 satellite was built to replace a virtually identical spacecraft that was destroyed in a 2009 launch failure aboard a different rocket. The delay and switch to the Delta 2 drove the cost up by nearly $200 million, but mission scientists say the data collected over the next few years will be worth it.

"OCO-2 is our first NASA mission dedicated to studying carbon dioxide and this makes it of critical importance to the scientists who are trying to understand the impact of humans on global climate change."

Knifing through marine layer fog that spoiled the view for onlookers at the sprawling Air Force base, the 127-foot-tall Delta 2 quickly climbed away from Space Launch Complex 2 atop a brilliant jet of fiery exhaust, arcing away to the south over the Pacific Ocean on a polar orbit trajectory tilted 98.2 degrees to the equator.

The strap-on boosters burned out 69 seconds after launch and fell away 30 seconds later. The rocket's first stage engine fired another two minutes and 45 seconds before it shut down as planned at an altitude of 57 miles. An Aerojet Rocketdyne AJ10 engine powering the second stage then completed the climb to orbit, ending the first of two required burns about 10 minutes and 20 seconds after liftoff.

After a 40-minute coast, the engine reignited for a short 12-second burn to complete the launch phase of the mission, putting the craft in a roughly circular orbit at an altitude of around 430 miles. Spacecraft separation followed five minutes later and data relayed through NASA's communications satellite network confirmed OCO-2's twin solar panels unfolded and locked in place as required.

"I am pleased to report that ... all of the spacecraft subsystems that are (required at this point) have been turned on, all appear to be nominal, the solar arrays did deploy and we are power positive," said Ralph Basilio, OCO-2 project manager at the Jet Propulsion Laboratory. "We're now on our way to completing the rest of the spacecraft checkout process."

The original OCO satellite was lost in February 2009 when the protective payload fairing atop its Orbital Sciences Corp. Taurus XL rocket failed to separate from the booster. After a second Taurus fairing separation failure, NASA managers decided to launch OCO-2 aboard a United Launch Alliance Delta 2 rocket.

Only five of the venerable boosters were left in the ULA inventory as the company completes a transition to more powerful Delta 4s and Atlas 5s. But NASA bought four of the remaining Delta 2s for smaller science spacecraft and OCO-2's launch marked the first flight in nearly three years for the familiar booster.

"Delta 2 performed like a champ," said NASA launch director Tim Dunn. "There was pure joy in the mission director's center at spacecraft separation, I can tell you that."

Operating in a polar orbit, OCO-2 will fly over nearly every point on the planet every 16 days, crossing the equator at the same time each day.

The Orbital Sciences-built spacecraft is equipped with a single instrument, a high-resolution spectrometer designed to break down sunlight reflected from Earth into its component colors. Specifically targeted colors lose intensity when high levels of CO2 are present and brighten when levels are lower. By carefully measuring that intensity in three wavelengths, scientists can calculate carbon dioxide levels as small as 1 part per million

OCO-2's spectrometer will make 69,000 measurements every orbit, or 8 million each 16-day cycle. Researchers also will collect data from ground stations once each day to verify the accuracy of the satellite's readings.

"With that one instrument, we're going to collect hundreds of thousands of measurements each day, which will then provide a global description of carbon dioxide in the atmosphere," Edwards said. "It's going to be an unprecedented level of coverage and resolution."

It will take flight controllers six to seven weeks to activate and check out the spacecraft's systems and to carry out rocket firings to raise the satellite's altitude another nine miles or so.

Once on station, OCO-2 will begin at least two years of around-the-clock observations, joining four spacecraft in the same orbit, known as the "A train," that are monitoring other aspects of Earth's environment in nearly simultaneous fashion.

Carbon dioxide is a critical factor in climate change because it acts as a greenhouse gas, trapping heat in the atmosphere. Ground-based measurements show an annual cycle of CO2 emission and re-absorption as the seasons change.

Plants emit about 440 billion tons of carbon dioxide every year while the oceans contribute around 330 billion tons. Most of that naturally occurring CO2 is emitted and then re-absorbed as the seasons change.

But overall trend is a slow but steady increase in CO2 levels, with recent readings of up to 400 parts per mission. That's believed to be the highest concentration in the past 800,000 years. A major question mark is the ongoing impact of human activity.

"Since the beginning of the industrial age, we've been burning fossil fuels, also practicing deforestation and other things that have been emitting carbon dioxide into the atmosphere at an ever growing rate," said David Crisp, OCO-2 science team leader at NASA's Jet Propulsion Laboratory.

About half of the carbon dioxide generated by human activity is re-absorbed each year, on average, but scientists don't understand where it goes or whether the "sinks" that take up the CO2 will continue to operate in the same way down the road.

"Half of the carbon dioxide we're dumping into the atmosphere every year is disappearing somewhere," Crisp said. "It's dissolving in the ocean waters, about a quarter of it is, and the other quarter we assume is going into the land biosphere somewhere, into forests, into grasslands, somewhere. But we don't know where."

"It's absolutely critical that we learn what processes are absorbing carbon dioxide in our system today, over half of the carbon dioxide we're emitting, because we need to understand, first of all, how much longer they might continue to do us that great favor."

Another critical factor is how that absorption varies from year to year.

"While our inputs have been growing slowly but steadily over time, the amount that stays in the atmosphere varies dramatically from year to year," Crisp said. "Sometimes, almost a hundred percent of the carbon dioxide we put into the atmosphere stays there, sometimes almost none. We don't know why.